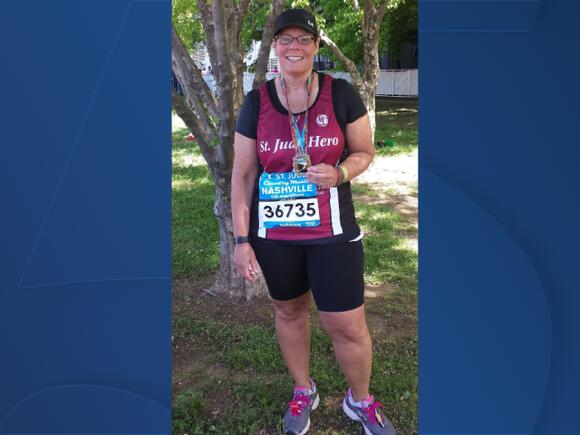 Sue Ellen Henderson knows she won't finish first in the Rock n' Roll Running Series races this weekend in Nashville. "I’m not trying to set any records or anything," said Henderson.

But she will have a lasting impact. She raised the most money this year for the race's charity — St. Jude Children's Research Hospital in Memphis. "I honestly have no idea how I raise this much money. It’s St. Jude not me," she said.

Henderson hosted everything from an Antique Car Show to selling pork loins in her hometown of Evanston, Indiana. Her total donation: more than $130,000. "Once you get in the St. Jude family and find out what it’s about, and learn more, you just want to do more. So I can’t give them all my money but I can convince 300 of my friends to give them money," said Henderson.

As you might have guessed, she feels compelled to fundraise year-round because she's seen firsthand the impact the hospital can have, even if the result isn't what they wanted. "I have a cousin whose son was a patient at St. Jude in the 2000 time frame. And he passed away," she said.

She says she thinks of all the children they can save when she's running the race and has participated in the Rock n' Roll Running Series since it was rebranded in 2011. She hopes others will feel compelled to raise money as well. "It will change your life in so many ways, so fill that little spot in your heart," she said.

Henderson is participating in the 10K race this year since she recently had knee surgery, but hopes to return to her normal half marathon by next April — when the racing series returns to its normal weekend.

Earl Swensson, who designed Music City landmarks from buildings at Belmont University to the Schermerhorn Symphony Center, died this week. He was 91.
NASHVILLE, TN・1 DAY AGO
NewsChannel 5 WTVF

The program through the OASIS Center allows young adults in a housing crisis to stay with volunteers for one to six months.
NASHVILLE, TN・10 HOURS AGO
NewsChannel 5 WTVF

Commercial flights could be coming to the Upper Cumberland

It could be another option for travel in the mid-state. Should the Upper Cumberland Regional Airport offer commercial flights? That's the question airport officials are looking to answer.
NASHVILLE, TN・1 DAY AGO

Nashville Musician Kyle Veazey prepares to play in his first show at a Music City venue after more than two decades overcoming health complications and re-training his paralyzed hand to strum a guitar.
NASHVILLE, TN・5 DAYS AGO
NewsChannel 5 WTVF

Students across Vanderbilt University say it’s too early to return to campus with the omicron variant showing no signs of slowing down.
NASHVILLE, TN・7 DAYS AGO