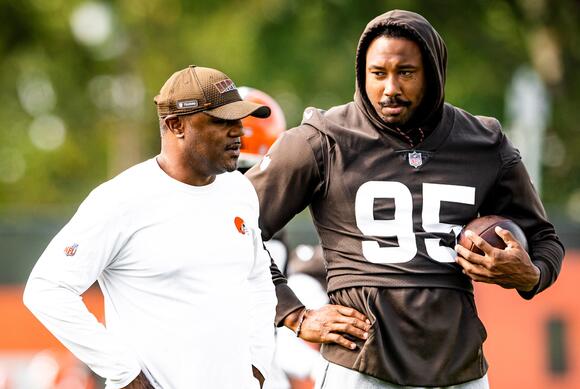 Garrett expressed his frustrations over a lack of defensive adjustments to reporters following a 45-7 loss at New England that dropped the Browns to 5-5 and saw them allow three touchdown drives of over 90 yards.

“I don’t think there was ever like a rift between us,” Garrett said Friday. “There was never a problem. I was frustrated because I felt like we could have done more, but it’s tough to see.

“I mean, he’s got a tough job just like I do, and I want to make plays and it was tough for him because they were scheming me and JD and he’s doing his best to put us in position to make plays, so I don’t think there’s a problem at all between us.”

It marked the fourth time the Browns allowed over 28 points in a game this season, and they’re winless in those games.

Thursday afternoon Woods, who has come under fire for an underperforming and inconsistent defensive unit, said he had no problems with Garrett or criticism from fans and media.

“He knew what I meant, and he knows that none of us did well enough – coaches or players,” Garrett said. “So he wants to see us make plays and I’m sure everybody else does too in Cleveland so I don’t think he took it the wrong way. We just all want it to stay in house and that’s understandable.”

Head coach Kevin Stefanski spoke with Garrett on Monday about his postgame remarks and encouraged the All Pro to keep his dissatisfaction in house.

“I think it’s important for all of us to see eye to eye – players and coaches,” Garrett said. “You’ve got to have chemistry all across the board and when something’s off, then that’s when you see holes in our game, and I think we got some things corrected out here in what we want and what we want to achieve and where we want guys to line up on the field, so I think we’ll be good.”

Playing hurt – Baker Mayfield might be beat up, but Stefanski is going to keep trotting him out there until Mayfield needs a wheelchair.

Despite facing the 0-8-1 Lions, Stefanski won’t give Mayfield a week to rest a pair of knee injuries, a sore foot as well as torn labrum and fracture of the humerus bone in his left shoulder.

“He will start,” Stefanski said.

The Browns are paying Case Keenum $6 million to hold a clipboard, despite Keenum helping the Browns beat the Broncos earlier this year when Mayfield wouldn’t recover in time from dislocating his left shoulder October 17 in a 37-14 loss to the Cardinals.

Last week against the Patriots Mayfield suffered a right knee contusion which caused him to lose feeling in his leg temporarily. The injuries have taken their toll and Mayfield’s accuracy, touch and mobility have not been where they need to be, yet Stefanski insists Mayfield is good enough to play.

To Stefanski’s point, Mayfield has looked more comfortable throwing the football in practice during the portions open to reporters – on air, with no defense and pressure – on Friday’s compared to earlier in the week. Then Sunday comes.

News to me – Garrett was a little surprised to learn that Jared Goff would not be starting Sunday for the Lions and Tim Boyle will make his first NFL start.

“It’s not Goff?” Garrett responded when asked what he new about Detroit’s young QB.

“Not much. I have to do my research. I wasn’t sure if Goff was going to play, so now get to it. Still got a lot of time for film study.”

Goff has been unable to practice due to an oblique injury and is listed as doubtful for the game.

While Garrett has some studying to do on Boyle, he’s expecting the Lions to run, and run a lot Sunday.

“They’re not going to try and let him put the game in his hands,” Garrett said. “They’ll try and run the ball, they had success with that last week. So we’ve got to force their hand, where if they can’t run the ball well, he’s got to make plays. And then see what we can do.

Matthew Stafford finally won a playoff game. He never accomplished that feat in 12 seasons as the Detroit Lions quarterback, but Stafford helped the Rams easily advance over the crumbling Arizona Cardinals in the final game of the wild-card round. The reaction from Lions fans, media and former players on...
NFL・14 HOURS AGO
Falcon Report

Cordarrelle Patterson is a free agent, and Mike Davis might not be back. Here's a look at five running backs the Atlanta Falcons could target in free agency.
NFL・1 DAY AGO
92.3 The Fan

John Fanta: Baker is likely the starter next year

What options could the Browns have at quarterback next season? John Fanta of Fox Sports believes the most likely road leads right back to Baker Mayfield.
NFL・1 DAY AGO

Browns DT McDowell arrested in Fla. in attack on officer

CLEVELAND — (AP) — Cleveland Browns defensive tackle Malik McDowell, who was given a second chance by the team after serving jail time, was arrested Monday in Florida on charges of beating a police officer and public exposure. Police in Deerfield Beach, Florida, said they were responding to...
DEERFIELD BEACH, FL・9 MINUTES AGO
92.3 The Fan

Ian Eagle: My gut feeling is, Baker will be back for the Browns next year

Ian Eagle, Brooklyn Nets and NFL on CBS broadcaster, talks with Matt Dery on the NFL postseason, as well as the Cleveland Cavaliers and the Cleveland Browns, and if Baker Mayfield will return to Cleveland for the 2022 season.
NFL・19 HOURS AGO
92.3 The Fan

Scott Petrak: We're past the point of worrying about Baker Mayfield's feelings if the Browns bring in another quarterback

How will Baker Mayfield react if the Browns bring in another quarterback to compete for the starting position? Scott Petrak says it doesn’t matter, he needs to earn his spot either way. Hear why with Baskin and Phelps!
NFL・2 HOURS AGO
The Spun

FOX NFL broadcaster and former Cowboy great Troy Aikman didn’t seem to be too happy that he and Joe Buck were in Tampa Bay rather than Dallas. As Buck teased the next Sunday NFC playoff matchup between the Cowboys and 49ers on CBS, Aikman voiced his displeasure with some coded language.
NFL・1 DAY AGO

The Kansas City Chiefs officially booked their ticket to a rematch with Josh Allen and the Buffalo Bills in the Divisional Round after blowing out the Pittsburgh Steelers on Sunday. As we all know, Patrick Mahomes and Co. beat the Bills 38-24 last season in the AFC title game and...
NFL・1 DAY AGO
Sportsnaut

It felt like January 1991 again for Sal Maiorana as Josh Allen and the Buffalo Bills put forth perhaps the best performance in team history.
NFL・2 DAYS AGO
WGR550

When it comes to the New England Patriots, we’ve been through so much. Nearly twenty years of domination. Three wins from ‘01 to ‘19. You know a team is in your head when you can remember those three wins without even having to look them up.
NFL・2 DAYS AGO
Larry Brown Sports

The Pittsburgh Steelers will have to address the quarterback position this offseason for the first time in 18 years. They won’t have that high of a draft pick after reaching the playoffs, so some have wondered if they could explore blockbuster trade scenarios. That does not appear to be the plan.
NFL・2 DAYS AGO

Tony Romo didn’t like how Cowboys quarterback Dak Prescott handled the end of the game on Sunday. After Prescott slid at the 25-yard line, he hurried up to the line with the center but didn’t find the ref so he could properly spot the ball. Romo confirmed during...
NFL・1 DAY AGO
ClutchPoints

Just like the rest of the Dallas Cowboys fan base, former team quarterback Tony Romo didn’t like how the Wild Card game against the San Francisco 49ers ended. It’s not that Romo is blaming anyone. The Cowboys could have done better in setting up the final play, and the referees might have some shortcomings as well. However, for the four-time Pro Bowler, it was just a frustrating ending for the home team and their fans who were hoping for that miracle to give them the victory.
NFL・1 DAY AGO
The Spun

The Las Vegas Raiders find themselves down 10 to the Bengals in the fourth quarter of their first round playoff matchup. But the team doesn’t get there without the leadership and play of Derek Carr. On Saturday, inactive Raiders running back Kenyan Drake had a message for those still...
NFL・2 DAYS AGO
Sports Illustrated