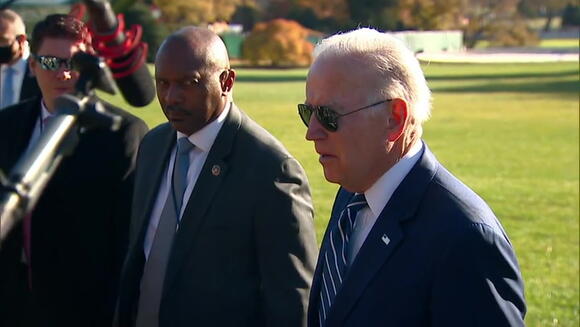 The chairman of the House Judiciary Committee blasted the verdict released on Friday in the trial of Kyle Rittenhouse and called for the Justice Department to review the court decision.

Rep Jerry Nadler’s remarks veered sharply from the message issued by President Joe Biden, who unlike progressives said that he respected the jury’s decision.

Mr Nadler tweeted after Mr Rittenhouse was found not guilty on all charges that the verdict was a “miscarriage of justice” that “sets a dangerous precedent which justifies federal review by DOJ.”

It’s not clear exactly how a Justice Department review of the case would play out, as the agency only has the power to investigate law enforcement agencies. It has no power to “intervene on matters of state law”, according to its own website.

Mr Biden moments earlier had addressed the jury’s decision on the White House lawn, telling reporters: “I stand by what the jury has concluded. The jury system works and we have to abide by it."

In a lengthier statement released minutes later by the White House, the president offered a slightly different tone, claiming that he felt “angry and concerned” by the verdict while urging protesters to remain peaceful.

“While the verdict in Kenosha will leave many Americans feeling angry and concerned, myself included, we must acknowledge that the jury has spoken,” he said.

“I ran on a promise to bring Americans together, because I believe that what unites us is far greater than what divides us. I know that we’re not going to heal our country’s wounds overnight, but I remain steadfast in my commitment to do everything in my power to ensure that every American is treated equally, with fairness and dignity, under the law,” Mr Biden continued.

The Judiciary chair’s statement was more in line with progressives in the House such as Rashida Tlaib, who said that Friday’s news was evidence that the American justice system “protects white supremacy”.

Mr Rittenhouse’s trial occurred as a separate court is debating the fate of three white men charged with chasing down and murdering a Black man, Ahmaud Arbery, in Georgia.

Mr Biden himself previously referred to Mr Rittenhouse in a video about white supremacism in the US; he demurred on Friday when asked if he stood by that characterisation.

He was found not guilty. get over it. Can't be tried again so quit wasting money trying. People have the rightto defend themselves whether democrats like it or not.

This is wrong on SO many levels. The Federal Government is becoming a dictatorship. Going after teens & parents. They need to be stopped!

Are these people completely blind? or are they just overtaken by hate. Anyone with eyeballs and a brain, clearly sees self defense. our constitutional rights are under attack!

The jury’s verdict in the Elizabeth Holmes trial had something for everyone: conviction on four counts, a hung jury on three counts, and acquittal on four counts. Casual observers might consider this verdict to be anticlimactic. Since the government is expected to win convictions in white collar cases—it does so about 85% of the time—its victories tend not to stand out. Only Holmes’ acquittal across the board would have been shocking from that perspective.
CONGRESS & COURTS・9 DAYS AGO
Business Insider

"Nearly 10 million children will be thrown back into or deeper into poverty this winter" if the child tax credit isn't renewed, the letter says.
PRESIDENTIAL ELECTION・3 DAYS AGO
The Independent

Supreme Court Justice Stephen Breyer is expected to announce his retirement, NBC News reported, which gives President Joe Biden an opportunity to replace one of the court’s three liberals and maintain the balance of the highest federal court in the US. Democrats had hoped Mr Breyer, 83, would retire while they hold the majority in the Senate before the 2022 midterm elections, since Republicans are expected to win the majority.The fears were compounded by the fact former Justice Ruth Bader Ginsburg died weeks before the 2020 presidential election and then-president Donald Trump nominated arch-conservative Amy Coney Barrett to replace...
CONGRESS & COURTS・2 DAYS AGO
The Guardian

McConnell said he would give Biden's nominee "a fair look" on the same day he warned the president against choosing a judge from "the radical left."
CONGRESS & COURTS・1 DAY AGO
Newsweek

Conservative pundits have brought up Biden's past opposition to Brown when the judge was nominated to the U.S. Court of Appeals for the D.C. Circuit.
CONGRESS & COURTS・15 HOURS AGO
The Independent

The news that Stephen Breyer, one of the three remaining liberals on the Supreme Court, is expected to retire soon has set off fevered speculation about who will replace him. On Wednesday, a pair of Fox News hosts had an unlikely suggestion: vice-president Kamala Harris.President Biden pledged to nominate the first Black woman to the Supreme Court during his 2020 campaign, and the vice-president has reportedly been unhappy with her role in the administration thus far.“This person has to be a woman. She’s got to be Black, and she’s got to be younger. Anybody thinking what I’m thinking?” said...
CONGRESS & COURTS・2 DAYS AGO
Business Insider

"Stated simply, the primary takeaway from the past 250 years of recorded American history is that Presidents are not kings," Judge Ketanji Brown Jackson wrote in 2019.
PRESIDENTIAL ELECTION・2 DAYS AGO

WASHINGTON (WV News) — U.S. Sen. Joe Manchin, D-W.Va., on Wednesday issued a statement in response to reports that Justice Stephen Breyer plans to retire from the U.S. Supreme Court. “Justice Breyer has dedicated much of his life to upholding the rule of law, and we are grateful for...
CONGRESS & COURTS・2 DAYS AGO
Business Insider

Rep. Jim Clyburn, the third-ranking Democrat in the U.S. House of Representatives and close ally to President Joe Biden, says South Carolina’s U.S. District Court Judge Michelle Childs of Columbia is ready for the U.S. Supreme Court. “Judge Childs has everything it takes to be a great justice,” Clyburn...
COLUMBIA, SC・2 DAYS AGO
The Independent

News that Supreme Court Justice Stephen Breyer plans to announce his retirement sent shockwaves through Washington and ended GOP hopes that the next court vacancy would occur while Republicans controlled the Senate.The court underwent significant changes under the Trump administration, when over the course of four years, president Donald Trump oversaw the confirmation of three new justices to the bench, a third of the total bench, shifting the makeup of the court firmly to the right.Mr Breyer’s retirement during the reign of a Democratic president means that the court’s overall make up will not change, for now. Thanks to...
CONGRESS & COURTS・2 DAYS AGO

WASHINGTON — U.S. Supreme Court Justice Stephen Breyer is planning to announce his retirement in the coming days, according to multiple press reports Wednesday. The decision by the 83-year-old justice, who was nominated by President Bill Clinton in 1994, would give President Joe Biden his first chance to nominate a member of the Supreme Court, […] The post Reports: Supreme Court Justice Breyer to step down appeared first on Arizona Mirror.
CONGRESS & COURTS・2 DAYS AGO
The Independent

Senate Democrats who have played defense for the last three Supreme Court vacancies plan to move swiftly to replace retiring Supreme Court Justice Stephen Breyer using the rapid 2020 confirmation of Justice Amy Coney Barrett as a new standard. Barrett was confirmed exactly a month after then-President Donald Trump nominated her to replace the late Justice Ruth Bader Ginsburg — and just five weeks after Ginsburg’s death in September of that year. Democrats sharply criticized that timeline then, arguing that most confirmations had taken much longer and that Republicans were trying to jam the nomination through in case...
PRESIDENTIAL ELECTION・2 DAYS AGO
bloomberglaw.com

Chief Justice John Roberts published his year-end report on Dec. 31, 2021, and, as is his custom, he discussed the important happenings in the federal judiciary over the previous year. Unfortunately, the effort was a swing and a miss. In spite of growing public concern over how the third branch...
CONGRESS & COURTS・9 DAYS AGO
Decider.com

Joy Behar Laments Supreme Court on ‘The View’: “That Branch of Government Is So Anti-Democracy”

Now that Supreme Court Justice Stephen Breyer announced his retirement, the White House has reiterated President Joe Biden‘s commitment to appointing the first Black woman justice. But on today’s episode of The View, host Joy Behar lamented the limits of the Supreme Court in general, calling it a “dictatorial” branch of government.
CONGRESS & COURTS・1 DAY AGO

Former Vice President Mike Pence said Thursday it is clear that his successors, President Joe Biden and Vice President Kamala Harris are picking up where Barack Obama left off in fundamentally transforming the American system into one that is hard-left. Pence also reacted to Harris' trip to Honduras to visit...
PRESIDENTIAL ELECTION・1 DAY AGO
KTAR.com

PHOENIX — With Supreme Court Justice Stephen Breyer retiring, Arizona’s U.S. senators said Thursday they are looking forward to the confirmation process. It will be the second time Sen. Kyrsten Sinema takes part in a Supreme Court confirmation, and the first for Sen. Mark Kelly. “I join all...
PHOENIX, AZ・1 DAY AGO
Newsweek

"The Biden Administration has sown nothing but disaster for our country through its illegal, unconstitutional immigration policies," wrote Ken Paxton of Texas.
PRESIDENTIAL ELECTION・16 HOURS AGO
The Independent

Conservative critic Candace Owens was mocked online after she suggested that Americans wanted her to be the next Supreme Court justice following the retirement of Stephen Breyer.Ms Owens noticed her name was trending on Twitter and asked in a tweet: “Am I really trending because America wants me to be the next Supreme Court justice? What an honour! (sic).”Shortly after president Joe Biden announced he would nominate his pick for the Supreme Court to fill Mr Breyer’s seat before the end of February, she again took to Twitter to share her remark.During his campaign for the presidency, Mr Biden had...
CONGRESS & COURTS・1 DAY AGO