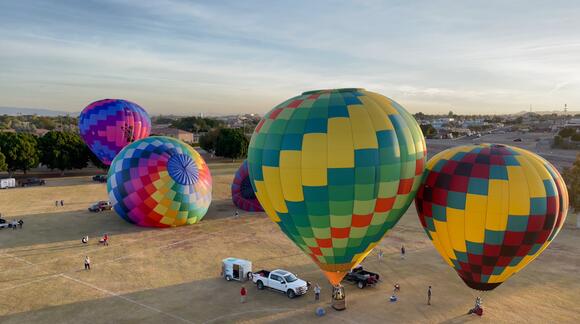 It's two days of food, music, entertainment and you guessed it, hot air balloons!

Caballeros de Yuma is a main sponsor of the event. Dan Tortolano says it's an early start to a beautiful morning.

"We start at the West Wetlands Park. Sunrise. So, come out early," Tortolano explained. "You can walk around with the pilots amongst the balloons so you can really get a sense of the balloons."

Our balloon pilot, Peggy Watson-Meinke has 30 years under her belt.

At its peak, the balloon reached about 1,000 feet. It traveled around 12 miles per hour, but the speed is all dependent on one factor.

"We're at the mercy of the wind. I'm not powering this. It's under the power of the wind completely. I'm not driving it," Watson-Meinke stated.

The balloon's height is equivalent to an eight-story building, and just the balloon itself weighs 265 pounds.

Adding and taking away heat is how the pilot controls the altitude. It's usually about 220 degrees on the inside.

"I burn more if I want to ascend. If I want to come down faster, I pull this red line and that just vents hot air out of the top of the balloon," Watson-Meinke explained.

As we soared over neighborhoods, hundred of dogs were heard barking because of a distinct sound in the balloon not heard by the human ear.

"The burners make a high frequency and that they're not used to hearing, and so we get every dog in the neighborhood barking at us," Watson-Meinke said.

There will be a glowing event starting at 5:30 p.m. followed by a firework show.

Admission is $2 and Caballeros de Yuma is asking for a non-perishable donation which benefits the Yuma Community Food Bank.

"We'll be doing a balloon glow. So, they're tethered to the ground," Tortolano said. "The balloons are inflated and the burner flames are thrown up inside the balloon, and they're illuminated from the inside out to see all their brilliant colors."

The city of Yuma is working to rebuild Kennedy skatepark and today the latest design will be unveiled to the city council. The post Parks and Recreation will be presenting local skatepark design to the City Council appeared first on KYMA.
YUMA, AZ・2 DAYS AGO
KYMA News 11

If you have the day off Monday for Martin Luther King Jr. Day and are looking for something fun to do in Yuma to honor MLK, there is a parade around the city. The post MLK parade march in Yuma appeared first on KYMA.
YUMA, AZ・4 DAYS AGO

Local shoppers react to Bed, Bath, And Beyond store closing

Bed Bath and Beyond in Yuma will be closing its doors soon. Local customers will eventually have to look elsewhere for their home items. The post Local shoppers react to Bed, Bath, And Beyond store closing appeared first on KYMA.
YUMA, AZ・2 DAYS AGO
KYMA News 11

Now to a very special story about a dog found in a canal near the U-S Mexico border in Yuma and one kind person who came to the rescue. The post Rescued canal dog gets adopted appeared first on KYMA.
YUMA, AZ・9 DAYS AGO

COVID-19 cases just continue to rise, and while it affects all industries of Yuma's economy, local restaurants have been among those affected the most. The post COVID-19 surge affecting local restaurants in Yuma appeared first on KYMA.
YUMA, AZ・9 DAYS AGO
KYMA News 11

Yuma sees 9.5% increase in cost of living over past 10 years

It seems like everything has been getting pricier lately, and in Yuma, a new study confirms that wallets are becoming a bit lighter. The post Yuma sees 9.5% increase in cost of living over past 10 years appeared first on KYMA.
YUMA, AZ・8 DAYS AGO
KYMA News 11

Local quilters uses their art to give back to the community

It's back to class for thousands of elementary school students across Yuma County, and for now, not even COVID is stopping them from hitting the books. The post Elementary students in Yuma go back to class with full COVID protocols appeared first on KYMA.
YUMA, AZ・10 DAYS AGO
KYMA News 11

Bed Bath & Beyond is revealing the location of 37 of the 200 stores it plans to close in coming weeks, including our Yuma location on Castle Dome Avenue. The post Yuma Bed Bath & Beyond closing permanently appeared first on KYMA.
YUMA, AZ・14 DAYS AGO
KYMA News 11

A year ago the U.S. Capitol was invaded by many supporters of then President Donald Trump in an attempt to overturn the results of the 2020 election. Yuma locals, like Walter Ashenfelter, look back at the events, still frustrated with what happened. The post Yuma locals and visitors reflect on January 6th riots on first anniversary appeared first on KYMA.
YUMA, AZ・15 DAYS AGO
KYMA News 11

Quilting dates back centuries, and is considered to be more than just a trade. The act brings together imagination and talent and creates art. The post It’s a centuries-old art form that is still leaving people in stitches appeared first on KYMA.
15 DAYS AGO
KYMA News 11