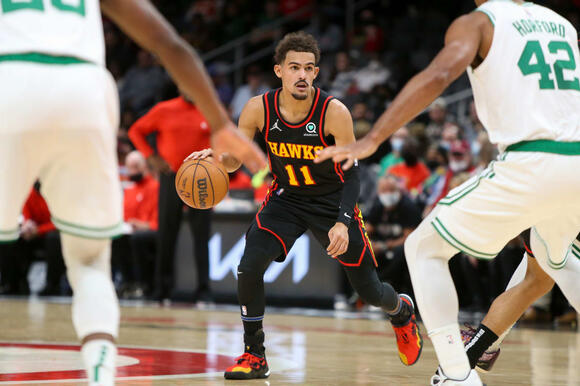 Watch this former Hawks player get exposed on defense.

Al Horford will always be a fan favorite of the Atlanta Hawks. Even though the forward is wearing Celtics green, the City of Atlanta won't forget Horford's contributions. After being drafted in 2007, Horford spent his first nine seasons in Atlanta. The big man was an All-Star in four of those seasons and racked up numerous league awards.

Although it's nothing but love for Horford, he's still an opponent. That means there's a good chance that Hawks point guard Trae Young is going to embarrass him. Check out the nutmeg pass that Young threw Horford's legs on Wednesday night.

Got 'em. Young has a long history of going through the defender's legs. Unfortunately for Horford, Young wasn't done with him that night.  Here is he blowing past the veteran post player later in the game.

That's a tough look for our guy Al. But that comes with the territory of defending Young. Like I said at the beginning of the article, it's nothing but love for Horford in Atlanta. Do you think he gets his jersey retired one day? Sound off on our Twitter or Facebook!

With the 2021-22 NBA season in full swing, basketball fans are putting on their jerseys and filling up arenas around
NBA・2 DAYS AGO
Sports Illustrated

Make it four straight wins for the Atlanta Hawks. Each victory came against a playoff team. Clearly, the Hawks have plenty more work to do. But there is no denying they have looked much better over the past week. Last night, the Hawks embarrassed the Charlotte Hornets 113-91. As always,...
NBA・1 DAY AGO
AllSooners

A former Oklahoma star is trying to help his team make a postseason surge. Former Sooners guard Trae Young and his Atlanta Hawks haven’t been able to capitalize on the deep playoff run of a year ago to this point in the season, but they are certainly starting to play better basketball recently behind stellar play by the Oklahoma-native.
NBA・1 DAY AGO

Trae Young pumped in 30 points and the visiting Atlanta Hawks controlled most of the game in defeating the cold-shooting Charlotte Hornets 113-91 on Sunday night. Young connected on eight of his 15 attempts from beyond the 3-point arc. De'Andre Hunter posted 20 points, Kevin Huerter added 11 points and...
NBA・1 DAY AGO
Yardbarker

Make it four straight wins for the Atlanta Hawks. Each victory came against a playoff team. Clearly, the Hawks have plenty more work to do. But there is no denying they have looked much better over the past week. Tonight, the Hawks embarrassed the Charlotte Hornets 113-91. The Hornets entered...
NBA・1 DAY AGO
Sporting News

Denver Nuggets forward Nikola Jokic and Atlanta Hawks guard Trae Young have been named the NBA’s Players of the Week for Week 14. Check out their performances from the past week of action. Nikola Jokic, Denver Nuggets. The reigning Kia MVP continued his dominant 2021-22 campaign with averages of...
NBA・1 DAY AGO
Yardbarker

NBA Rumors: Hawks Are Putting Everyone But Trae Young And Clint Capela On The Trade Block

Just six months after their Conference Finals appearance, the Atlanta Hawks are looking to trade almost everyone on their roster. According to Jake Fischer of Bleacher Report, Atlanta wants to make some big changes, and are open to trading everyone not named Trae Young or Clint Capela. Now that the...
NBA・18 HOURS AGO

The Atlanta Hawks are surging, and not a moment too soon either. Their 113-91 win over the Charlotte Hornets pushed their winning streak to four games and snapped a mini-skid on the road. More importantly, it allowed them to hold their ground, even if they haven’t been able to make any headway in the Eastern Conference just yet.
NBA・8 HOURS AGO
Sports Illustrated

Earlier this morning, I wrote the scouting report for the Atlanta Hawks game against the Charlotte Hornets. This is shaping up to be a great divisional rivalry for years to come. Luckily for hoops fans, there are several ways they can get in on the action tonight. Game Details. Atlanta...
NBA・2 DAYS AGO
Sports Illustrated

Following an embarrassing loss to the Miami Heat on January 12, the few remaining fans in State Farm Arena started cheering "Let's Go Heat." Not only was it loud enough for the teams to hear it, but it was easily picked up on television and radio broadcasts. Twitter quickly lit up with everyone from the official Heat account to Trae Young's father, Ray Young, reacting to the chorus of jeers.
NBA・5 HOURS AGO
ClutchPoints

The Phoenix Suns are steamrolling the NBA once again. They became the first team to win 30 games this season due to their elite offense and even better defense. It’s not a matter of if, but who on Phoenix’s roster gets named an All-Star. Devin Booker has been...
PHOENIX, AZ・18 DAYS AGO

Bucks guard Grayson Allen addressed the Flagrant 2 foul he committed on Chicago Bulls guard Alex Caruso with a string of messages in his Discord server Saturday afternoon. "It was very unfortunate how it played out," Allen wrote. "I jumped to block it with my left and as I'm spinning went to grab the ball with my right hand not throw him down. It was a really hard fall and I'm glad he's okay. If I could do the play over again knowing he'd fall like that I wouldn't make the play."
NBA・1 DAY AGO
fadeawayworld.net

Charles Barkley and Michael Jordan were very close during their playing careers. Jordan and Barkley entered the NBA at the same time, as part of the legendary 1984 NBA Draft class. Jordan went to the Bulls, and Chuck would join the Philadelphia 76ers. But Barkley found more success when he was in the Western Conference.
NBA・1 DAY AGO
fadeawayworld.net

Vince Carter was a superstar, one of the most entertaining players to ever enter the NBA. His highlight-reel dunks and explosive scoring made him must-watch TV, especially in his early years with the Toronto Raptors. However, another thing that made Carter so impressive was his longevity, he made a league appearance in 4 different decades.
NBA・1 DAY AGO
fadeawayworld.net

LaMelo Ball Explains Why He Never Gets Nervous On The Court: "My Pops Told Me, You Can't Get Nervous In Basketball. Someone Has A Gun To Your Head, That's Nervous."

LaMelo is one of the NBA's brightest talents, a player that excels in multiple aspects of the game and plays fearlessly. Since he was drafted by the Charlotte Hornets, LaMelo has made several highlight-reel plays and a large part of that is down to how fearless he is on the court.
NBA・2 DAYS AGO
FastBreak on FanNation

Patrick Beverley has been ruled out for Sunday night's game between the Brooklyn Nets and Minnesota Timberwolves.
NBA・1 DAY AGO
ABC4

(ABC4) – Gonzaga University in Spokane, Washington has suspended the legendary basketball player and Utah Jazz Hall of Famer’s basketball season tickets as a result of his failure to abide by the school’s mask mandate. According to an interview with the Spokesman-Review, Stockton says that the issue boiled down to his stature as a public […]
SPOKANE, WA・2 DAYS AGO
Lakers Daily

Los Angeles Lakers legend Kareem Abdul-Jabbar ripped fellow Hall of Famer John Stockton for his comments on the COVID-19 pandemic. Stockton wrongly claimed that 150 athletes have died from taking the COVID-19 vaccine, and Abdul-Jabbar responded in an interview with CNN’s John Berman. “I think statements like that make...
NBA・21 HOURS AGO