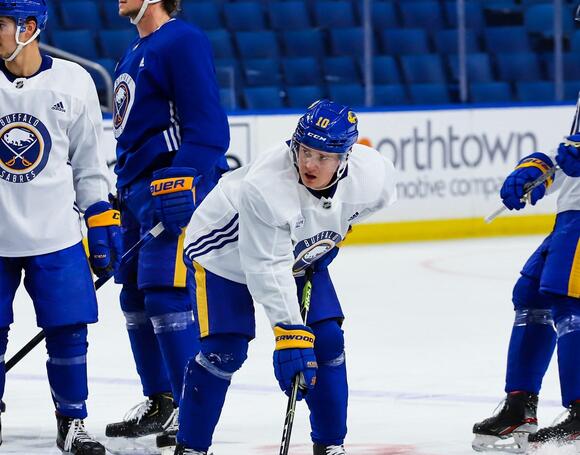 Buffalo, NY (WGR 550) – Henri Jokiharju was the first from the injury list to return to practice on Friday. The defenseman did everything during the session, but he’s not going to play Sunday against the New York Rangers. Don Granato said, “Henri looked great, it’s just a matter of strength and making sure we give him the time to get back to strength.

“The only concern going forward would be how fast he may fatigue.” Granato said it usually takes a guy two to four practices at most before they get back going.

Jokiharju has been out since the opener against the Montreal Canadiens. In the first period he took a shot on the ankle, but never left the game. As it turned out, he played the last two periods with a broken bone in his ankle. Jokiharju said, “I just kept the boot on with the skate and that helps you play through the game, but if you take that boot off, it swells and you can’t put the skate back on.”

Jokiharju has missed 15 games and he said, “It’s been tough because I was waiting all summer to get back and then that happened, so it was a big setback for me.”

Jokiharju has been on the ice for over a week. He said it’s been easier being with some of the other guys, “It was a long process with the trainers on the ice and I had Vic, Mitzy and Tucky on the ice as well, so it was bad for our team that it was that many guys but it was nice that I didn’t have to be there by myself.”

With five games next week, Jokiharju hopes to return in that stretch.

Robert Hagg didn’t practice, but Granato described it as a maintenance day and he will be back full go Saturday.

Colin Miller didn’t finish Thursday’s game after being run into the boards by Milan Lucic. Replays showed Miller had lost his balance before Lucic got to him to finish him, Granato said, “He felt fine. They put him in the protocol and pulled him from the bench because of where he got hit. He looked like he stumbled before the hit which left himself more exposed.”

As far as the hit itself Granato said, “I don’t like it when our guys…I want our guys to be able to defend themselves and he did trip up, but obviously when your guy gets hit like that you don’t like it and I’ll leave it at that.”

Granato said he’ll have a harder practice on Saturday, but he wanted the team to sit on that loss to the Calgary Flames, “It’s one of those games you want to forget, but you have to remember. I think they’ll feel much better tomorrow, but I didn’t want to change any mood today at all and think about it and soak it in.”

Starting on Sunday the Sabres will play five games in seven nights, three at home and two on the road.

Rasmus Ristolainen made his return to Buffalo on Saturday for his first career game against the Sabres. Paul Hamilton has more on his return, plus some postgame thoughts on Buffalo’s 6-3 win over the Flyers:
NHL・2 DAYS AGO
WGR550

The Buffalo Sabres welcomed the Philadelphia Flyers to KeyBank Center on Saturday for a matinee matchup. Josh Schmit has more from this game with his three observations:
NHL・2 DAYS AGO
FingerLakes1.com

Two key pieces will be returning to the Buffalo Sabres lineup for Tuesday’s road game against the Ottawa Senators. Head coach Don Granato announced that center Casey Mittelstadt and forward Zemgus Girgensons will return to the lineup. Mittelstadt has missed the last 16 games due to an upper-body injury...
NHL・1 HOUR AGO
WGR550

Sabres Week In Review: Youth shines in this past week for Buffalo

The Buffalo Sabres are now officially halfway through the 2021-22 NHL regular season, and they’re sitting just about where most people thought they would end up: the bottom of the NHL standings. The Sabres are 13-21-7 through their first 41 games, good for 33 points and sixth place in the Atlantic Division. They currently sit at 28th place in the overall standings. But despite looking like they’re headed for another season with no Stanley Cup Playoff berth, the Sabres are showcasing some positive changes and impressive outings in recent games, and there’s always a positive way to look at things. In this edition of Sabres Weekly, read about the latest Sabres storylines heading into a new week.
NHL・4 HOURS AGO
buffalohockeybeat.com

BUFFALO – Sabres forwards Casey Mittelstadt and Zemgus Girgensons practiced this morning and will likely return for Tuesday’s road game against the Ottawa Senators. “Zemgus is back, full, and so is Mittsy,” Sabres coach Don Granato said following the session. Mittelstadt, out with an upper-body injury the...
NHL・19 HOURS AGO
Sportsnaut

The 2021-22 season continues to careen in the wrong direction for the Philadelphia Flyers. On Monday, the Flyers will look
NHL・2 DAYS AGO
Sportsnaut

Now that the 2021-22 season is about half of the way through, and Covid is ravaging many clubs, it’s time
NHL・29 MINUTES AGO

Vegas Golden Knights winger Reilly Smith is one of the hottest names leading up to the NHL trade deadline. With
NHL・1 DAY AGO
News 12

Ryan Pulock has now missed 22 games and counting with a lower body injury, but if there’s a silver lining to his absence, Peter Schwartz writes that it’s the emergence of Robin Salo and Noah Dobson.
NHL・22 HOURS AGO
Sportsnaut

Kevin Lankinen is back on the shelf seemingly as quickly as he returned. The Chicago Blackhawks placed the backup goalie on injured reserve Sunday with a right hand injury a day after he made 40 saves during a 4-3 overtime road loss to the Minnesota Wild. Lankinen appeared in each of the Hawks’ last two games, his first action since returning from COVID-19 protocols. Before that, his last ...
NHL・1 DAY AGO
CBS LA

NEW YORK (AP) — Adam Fox scored the deciding goal in the sixth round of a shootout and the New York Rangers beat the Los Angeles Kings 3-2 on Monday night for their ninth win in 12 games. Chris Kreider got his NHL-leading 30th goal, Barclay Goodrow also scored and Artemi Panarin had two assists as New York won its fifth straight at home. Igor Shesterkin stopped 28 shots to pick up his 20th win of the season. Blake Lizotte and Alex Iafallo scored in the second period for Los Angeles. Jonathan Quick stopped 34 shots as the Kings lost for the...
NHL・15 HOURS AGO
Sportsnaut

When the Florida Panthers last saw the Seattle Kraken, they were attempting to set an NHL record for most home
NHL・2 DAYS AGO
USA TODAY

In a discussion about injuries, NHL great Bobby Orr once told Philadelphia Flyers defenseman Keith Yandle: “If you can skate, you can play.’’
NHL・1 DAY AGO
CBS Boston

BOSTON (CBS) — The Bruins will be a little shorthanded along the blue line as they wrap up a seven-game homestand. Defenseman Matt Grzelcyk will be sidelined on Monday night when the B’s welcome the Anaheim Ducks to TD Garden. Grzelcyk briefly left Saturday’s win over the Jets after being sent into the boards by Winnipeg’s Pierre-Luc Duboius in the first period. He did return to the game and finished with 13:35 of ice time, and was credited with an assist on David Pastrnak’s game-winning goal in the third period. Head coach Bruce Cassidy was cautiously optimistic that Grzelcyk avoided a serious...
NHL・1 DAY AGO
Sportsnaut

Keeping pucks out of the net continues to be an issue for the Columbus Blue Jackets and Ottawa Senators. With
NHL・2 DAYS AGO