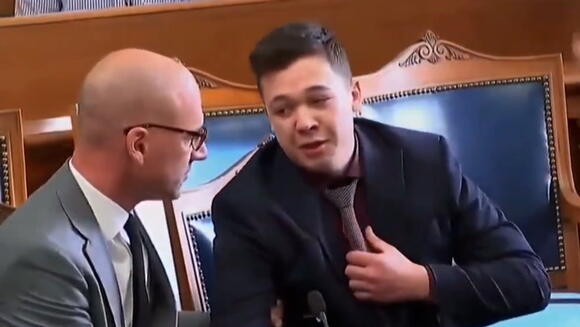 Right-wing members of Congress and supporters of former president Donald Trump celebrated Kyle Rittenhouse being found not guilty on all five charges for killing two people and wounding another during a riot in Kenosha , Wisconsin.

“NOT GUILTY!!!!!!!” Rep Matt Gaetz of Florida tweeted. Earlier in the week, Mr Gaetz said he was considering hiring Mr Rittenhouse as a congressional intern.

But Rep Paul Gosar, who was censured this week for tweeting a doctored anime video that had a character with his head killing a character with Rep Alexandria Ocasio-Cortez’s’ head on it, said he’d arm-wrestle Mr Gaetz for the opportunity to have Mr Rittenhouse intern for him.

“Justice was served for #KyleRittenhouse and he is fully exonerated,” he tweeted. “As I said last year, obviously self-defense.”

Rep Marjorie Taylor Greene of Georgia celebrated him being “ACQUITTED on ALL charges!”

“May Kyle and his family now live in peace,” Ms Greene tweeted. “Those who help, protect, and defend are the good guys. Kyle is one of good ones.”

Rep Thomas Massie of Kentucky also celebrated and also criticised a tweet that featured a video with Mr Rittenhouse holding a gun and calling him a white supremacist.

“.@JoeBiden, you might want to delete this tweet. Defamation is a thing,” he tweeted. Mr Massie also said the video of the acquittal is a “must-watch” and said “There is hope for this country.”

Donald Trump Jr referenced how Mr Biden was put under anaesthesia on Friday to undergo a colonoscopy in the morning.

“The Rittenhouse jury just gave Biden his second colonoscopy of the day.

The Twitter account for Republicans on the House Judiciary Committee tweeted simply “Justice” after the verdict was announced.

“ACQUITTED ON ALL CHARGES,” he tweeted.

“You have a right to defend yourselves,” he said. “Be armed, be dangerous, be moral,” according to a video from his Instagram story that the Lincoln Project captured.

How Rich Is Marjorie Taylor Greene?

Marjorie Taylor Greene, 47, is an American businessperson and politician who currently serves as a member of the U.S. Congress from Georgia's 14th District and is often referred to by her initials,...
ECONOMY・2 DAYS AGO
Business Insider

A former staffer for Rep. Kevin McCarthy said he's driven by the "most extreme wings" of the GOP. Former McCarthy aide Ryan O'Toole told CNN the congressman did not have a leadership strategy. O'Toole said McCarthy was instead motivated by what Reps. Marjorie Taylor Greene and Matt Gaetz want.
CONGRESS & COURTS・9 DAYS AGO
The Week

Matt Gaetz and Marjorie Taylor Greene slammed for declaring 'we're proud of the work we did on Jan. 6'

Reps. Matt Gaetz (R-Fla.) and Marjorie Taylor Greene (R-Ga.) took to the spotlight on Thursday to offer a reflection on last year's Capitol riot that varied pretty drastically from most others today. The two Republicans first appeared on Stephen Bannon's podcast to declare "we're ashamed of nothing," as Gaetz put...
CONGRESS & COURTS・10 DAYS AGO
Rolling Stone

‘We’re Ashamed of Nothing’: Matt Gaetz and Marjorie Taylor Greene Cement the Republican Stance on Jan. 6

“We’re ashamed of nothing.” Reps. Matt Gaetz (R-Fla.) and Marjorie Taylor Greene (R-Ga.) don’t feel too bad about what happened on Jan. 6. The far-right lawmakers on Thursday hosted what they described as the Republican “response” to a slate of Democratic events commemorating the anniversary of the Jan. 6 attack on the Capitol. They professed their lack of shame while offering a preview of their press conference on Steve Bannon’s podcast. “We’re proud of the work that we did on Jan. 6 to make legitimate arguments about election integrity,” Gaetz continued, adding that he and Greene planned to stage a march...
CONGRESS & COURTS・10 DAYS AGO

"I think Senator Cruz is smart enough to know since he's an attorney that no one's been charged with terrorism," said the Georgia Republican congresswoman.
CONGRESS & COURTS・10 DAYS AGO
The Independent

Two far-right members of the House of Representatives held a press conference on Capitol Hill on the anniversary of the 6 January insurrection, defending President Donald Trump’s attempts to overturn the 2020 election and blaming rioters from distracting the GOP from achieving that goal.As much of the media was focused on events being held within the Capitol building itself, Reps Marjorie Taylor Greene and Matt Gaetz, two of the most ardent supporters of 2020 election conspiracies on Capitol Hill, claimed that there were legitimate reasons to suspect fraud in the 2020 election while throwing the president’s own supporters who...
CONGRESS & COURTS・10 DAYS AGO
MSNBC

On the first anniversary of the Jan. 6 attack on the Capitol, Republicans didn't seem to know what to say, so GOP leaders largely stayed out of the spotlight. When it came time in the House of Representatives for a moment of silence to honor those who died as a result of the deadly riot, dozens of Democratic lawmakers gathered on the chamber floor. They were joined by just one of their Republican colleagues: Wyoming's Liz Cheney, who stood alongside her father, former Vice President Dick Cheney.
CONGRESS & COURTS・9 DAYS AGO
HuffingtonPost

Rep. Matt Gaetz (R-Fla.) announced Thursday, on the first anniversary of the deadly attack on the U.S. Capitol, that he was “ashamed of nothing” and that he and Rep. Marjorie Taylor Greene (R-Ga.) planned to retrace the steps of the rioters as if leading the faithful through the Holy Land.
FLORIDA STATE・10 DAYS AGO

"No one has been charged with treason, but it very well may have been a Fed-surrection," Gaetz said.
CONGRESS & COURTS・10 DAYS AGO
mediaite.com

‘We Are Ashamed of Nothing’: Defiant Matt Gaetz and Marjorie Taylor Greene Brag to Bannon About ‘The Work We Did on Jan. 6th’

Reps. Matt Gaetz (R-FL) and Marjorie Taylor Greene (R-GA) joined Steve Bannon on the one-year anniversary of the Jan. 6 attack on the U.S. Capitol to promote their press conference pushing 2020 election fraud allegations, the same baseless allegations that fueled the attack. “We’re ashamed of nothing,” Gaetz said on...
CONGRESS & COURTS・10 DAYS AGO
MSNBC

The Republican Party is a pro-infection party. From their support of lax Covid-19 safety measures to their tantrums over social media crackdowns on misinformation, Republicans have shown they believe the unfettered passage of dangerous material — be it viral content or a literal virus — is their right.
CONGRESS & COURTS・12 DAYS AGO
New York Post

Former President Donald Trump took another swipe at Twitter late Monday after Rep. Marjorie Taylor Greene (R-Ga.) was banned from the platform for spreading misinformation about the COVID-19 pandemic. “Twitter is a disgrace to democracy,” Trump said in a statement released by his Save America PAC. “They shouldn’t be allowed...
POTUS・12 DAYS AGO

This is an opinion column. None of us have a right to tweet. Social media platforms don’t owe us an explanation for banning certain accounts. Georgia Rep. Marjorie Taylor Greene’s personal account joined the ranks of Twitter’s permanently exiled to kick off the New Year. Whether Twitter recognizes it or not, they’re not punishing Greene, Republicans benefit politically, and competitors will capitalize on the censorship.
INTERNET・12 DAYS AGO
mediaite.com

Rep. Marjorie Taylor-Greene of Georgia called on all Republican lawmakers to abandon Twitter in the wake of her being banned by the platform. In an interview that aired Tuesday evening on Fox News Channel, she said that Twitter and other Silicon Valley tech giants are trying to cancel the entire GOP and the response cannot wait for election cycles to work themselves out.
CONGRESS & COURTS・12 DAYS AGO
Fox News

If armed violence erupts in 2024, the fate of the nation might well be decided by a simple fact: a big subset of the Republican Party has been systemically arming itself for this very reason.
PRESIDENTIAL ELECTION・27 DAYS AGO
Daily Mail

Republican Senator Mitt Romney tore into President Joe Biden and Democrats trying to pass federal voting rights legislation on Tuesday night, accusing them of undermining the 'reliability' of American elections in the process. The 2012 presidential candidate declared Biden was taking the same 'tragic road' as his predecessor Donald Trump...
PRESIDENTIAL ELECTION・4 DAYS AGO
The Atlantic

On January 3, 2021, Representative Marjorie Taylor Greene was sworn into office. One month later, she was removed from all her House committee assignments. Perhaps it wasn’t a huge shock that the representative who began her political career in 2017 writing about the “Clinton Kill List” for the now-defunct blog American Truth Seekers and then ran on the lie that Democrats were part of a satanic cabal (QAnon) would have so much trouble fitting in at the storied institution.
CONGRESS & COURTS・10 DAYS AGO
Commonwealth Journal

U.S. Rep. Marjorie Taylor Greene, R-Georgia, has lost her perch on Twitter. When she wasn't using it to chirp inanities, she devoted herself to screeching insanities. This, after all, was the woman who once posted that some wildfires out West were caused by "Jewish space lasers" built and funded by the Rothschilds. She also has argued that Zionists were pushing Muslim immigration to Europe as part of a giant conspiracy to outbreed white people.
CONGRESS & COURTS・10 DAYS AGO