Kevin Hart, Damon Wayans and more set for ‘Diff’rent Strokes’ and ‘The Facts of Life’ live revival on ABC 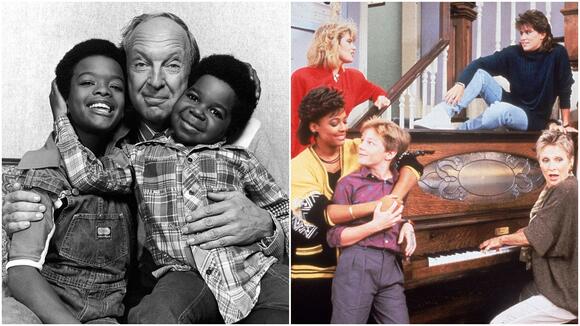 If you’re a nostalgic soul who grew up on antiquated modes of entertainment like cable television, this news will cheer you right up.

“Live in Front of a Studio Audience” will be recreating episodes of “Diff’rent Strokes” and “The Facts of Life” when it returns to ABC, according to Variety.

Show host Jimmy Kimmel revealed the news on his talk show explaining that it would be a 90-minute special where the actors will re-enact classic sitcom episodes from the original and its spinoff.

“Other than with my family, there’s no place I’d rather be in my 100th year than on a soundstage at Sony with these glorious actors reliving what our company had produced all those years ago and sharing it with the millions of viewers who could use a little laughter,” producer Norman Lear said.

Kimmel revealed that Kevin Hart will step into the role of Arnold, previously played by Gary Coleman.

John Lithgow will appear as Mr. Dummond, while Ann Dowd and Damon Wayans will play Mrs. Garrett and Willis, respectively.

The special will air for one night only. Those who don’t catch it live can tune in on Hulu the next day.

Everyone knows Brad Pitt is easy on the eyes, but what guys does he think have it?. In a recent interview with Vogue, the “World War Z” star broke down just who the best looking gentleman in Hollywood are, or were. Via Vogue’s Instagram, Pitt divulged, “You know...
CELEBRITIES・4 DAYS AGO
Audacy

Buckle up, Shania Twain fans! The beloved singer-songwriter has released a brand new single, ‘Waking Up Dreaming,’ her first in six years. Check it out now
MUSIC・3 DAYS AGO
Audacy

Lori Loughlin will star in her first movie role since 2018 in the Great American Family network’s ‘Fall Into Winter’ following her two-month stint in prison regarding a college admissions scandal.
MOVIES・4 DAYS AGO
BuzzFeed

"It's been 10 YEARS and Criston is still screaming, crying, throwing up, whenever someone mentions Rhaenyra."
TV SERIES・9 MINUTES AGO

Ashton Kutcher dealt with a rare form of vasculitis that left him unable to see, hear, or walk.
CELEBRITIES・9 MINUTES AGO
Variety

Dustin Lance Black, Oscar winner of best original screenplay for 2008’s “Milk,” revealed that he suffered a “serious head injury” last month, saying that the injury is the reason why he “vanished for a while.” “A month ago I sustained a serious head injury that put me out of commission,” Black wrote in an Instagram post. “Showing little improvement, my doctors ordered me to shut off my brain in hopes of it healing.” Black announced the news Monday on Instagram, but did not mention any specifics about what caused the head injury. The Instagram post features a series of photos...
CELEBRITIES・16 MINUTES AGO
Audacy

Audacy is bringing you the world premiere of Maren Morris - ‘I Can’t Love You Anymore’ all day on September 23, beginning at 12AM ET. To catch an exclusive listen, tune in to any of your favorite Audacy Country stations
MUSIC・3 DAYS AGO
Audacy

Michael Blackson on his Kevin Hart beef, and Nick Cannon the 'baby-making machine'

On a brand new episode of Impulsive with Logan Paul, comedian and actor, Michael Blackson, joins to roast the boys, divulge about his open relationship with his fiancé, discuss his beef with Kevin Hart, and reveal secrets from Wild ’N Out, and more.
CELEBRITIES・5 DAYS AGO

Foo Fighters will provide backing-band duties for the evening, while Hawkins’ cover band Chevy Metal is also set to take the stage, as well as singer Alanis Morissette, who Taylor helped provide the backbone for on her 1995 ‘Jagged Little Pill’ tour.
LOS ANGELES, CA・4 HOURS AGO
Audacy

The Doobie Brothers are grieving the loss of one of their own. The group announced the death of founder and drummer, John Hartman, last Friday. He was 72.
MUSIC・5 HOURS AGO
Audacy

Selena Gomez is giving us an inside look into her life and intimate thoughts in the brand new Apple TV+ documentary, ‘Selena Gomez: My Mind and Me,’ set to focus on a six-year period in Gomez’s life.
MOVIES・5 DAYS AGO
Audacy

Listen as Panic! at the Disco's Brendon Urie unpacks the making of 'Viva Las Vengeance'

Urie, recently joined the Song Exploder podcast to share what inspired the title “Viva Las Vengeance” and how the song came together with the help of Grammy-nominated producer Jake Sinclair and Oscar-nominated songwriter Mike Viola
MUSIC・4 DAYS AGO
Audacy

Ashton Kutcher recently teased that he and his wife Mila Kunis both starred in ‘basically the same movie’ in 2011. The coincidence didn’t stop there, with one of his costars pointing out another parallel.
MOVIES・3 HOURS AGO
Audacy

Billy Corgan on the return of The Smashing Pumpkins: 'Everybody’s on the same wavelength'

After years of not talking, The Smashing Pumpkins are back together, something frontman Billy Corgan never thought would happen. Talking to Audacy, Billy got candid all about the band’s history, re-formation, and more.
MUSIC・4 DAYS AGO
Audacy

We Can Survive 2022: Introducing your ‘Opening Act’ winner, Danger Foley

As the artists on Audacy’s We Can Survive 2022 lineup get ready to take the stage at Los Angeles’s Hollywood Bowl, on October 22, we are proud to announce the winner of this year’s ‘Opening Act’ competition, Danger Foley!
LOS ANGELES, CA・3 DAYS AGO
Audacy

Astrophysicist Neil deGrasse Tyson stopped by “The Late Show With Stephen Colbert” this week to totally change what everyone thinks about E.T. During Tyson’s chat with the late night host he dropped the knowledge that E.T. is not an animal, but a plant. Much like Groot from “Guardians of the Galaxy.”
SCIENCE・2 DAYS AGO