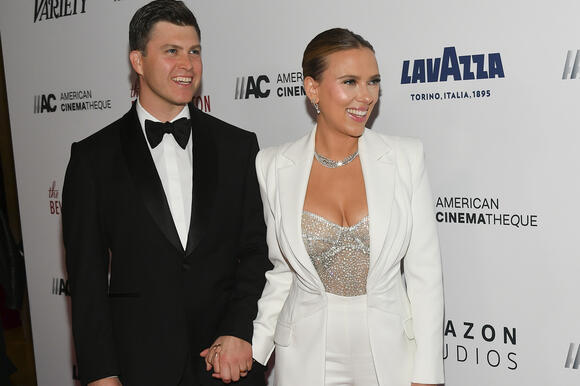 Scarlett Johansson has made a glamorous return to the red carpet on Thursday.

The actress attended the 2021 American Cinematheque Gala in a look by Versace . She wore a white form-fitted suit, that featured a backless design, over a crystal-embellished corset and styled her hair in an updo. She wore jewelry by Anita Ko and pumps by Gianvito Rossi.

She was styled by Molly Dickson, who has also worked with the likes of Camila Mendes of “Riverdale,” Sydney Sweeney of “Euphoria,” and Sadie Sink of “Stranger Things.”

Johansson attended the event, held at Los Angeles’ Beverly Hilton, with her husband “Saturday Night Live” star Colin Jost. This year, the actress was the recipient of the 35th American Cinematheque Award.

Each year, the award is given to an artist who made significant contributions to the art of the moving picture.

The appearance marked the couple’s first red carpet outing in almost two years, with their last one being during the Oscars in February 2020.

It was also the couple’s first red carpet appearance since the actress gave birth to their first child together. In August, they welcomed a son named Cosmo. Jost revealed the news with a simple statement on Instagram. “Ok ok we had a baby. His name is Cosmo. We love him very much,” the post read. “Privacy would be greatly appreciated.”

Johansson also has a seven-year-old daughter, Rose Dorothy, whom she shares with ex-husband Romain Dauriac.

The actress and “Saturday Night Live” star have been together since 2017, and were married in a private ceremony in October 2020.

As If Cover Girl Scarlett Johansson Wears Art on Her Sleeve

Click here to read the full article. FENDI’S HEARTTHROBS: Fendi helped bring some front row attention to a men’s fashion week that has been much more about safety and the clothes than celebrity-gawking. Actor Lucien Laviscount, the most recent addition to the “Emily in Paris” cast, and Evan Mock, of “Gossip Girl” fame, turned up to support the Italian brand, both dutifully excited.More from WWDAntonio Marras Men's Fall 2022Vien Men's Fall 2022MSGM Men's Fall 2022 Laviscount, who donned Fendi’s single-breasted Klein blue suit and matching logo-ed fluid shirt, said it was his first time in Milan. Talking about “Emily in Paris,” the hit...
DESIGNERS & COLLECTIONS・2 DAYS AGO
WWD

Click here to read the full article. MILAN — The curtain rises Friday on Milan Men’s Fashion Week and despite the surge of the Omicron variant and the uncertainties surrounding this moment in time, Carlo Capasa, chairman of Italy’s Camera della Moda, is urging everyone to “find the right point of balance.” Counting the number of cases — “which is so dramatic,” reaching daily infections of up to 200,000 in Italy — “is a distorted reflection of reality, which translates into a fear of traveling and increased restrictions,” Capasa contended. As several scientists are pointing out, most of the patients hospitalized were...
DESIGNERS & COLLECTIONS・4 DAYS AGO
WWD

Victoria Beckham is tired of lockdown’s cozy comfort aesthetics and wants to bring rigor — and sexiness — back to her collections. “I’ve been living beneath clothing for so long, I want to show a waist, accentuate a figure — I want to get dressed again,” said Beckham during a walk-through of the latest collection at her west London studio. She said her aim is “to bring sexy back in a very VB way,” which explains the new slim, gold buckle belts on trousers, open-and-shut zippers on knits, and gossamer slipdresses with lacy, lingerie details.
DESIGNERS & COLLECTIONS・4 DAYS AGO
epicstream.com

Without Scarlett Johansson, The Avengers' Plot Would Have Looked Very Different

Nobody needs to tell movie lovers that the Marvel Cinematic Universe has become one of the most successful franchises in the history of film. While there have been bigger movies, in terms of raw box office dollars, 2012's assembly of "The Avengers" remains arguably the most important movie in the franchise, if not one of the most pivotal blockbusters of all time. That all may sound hyperbolic, but it's true. The idea of uniting several individual franchises in one, epic event had never been attempted before, and not only did it work, but it worked like gangbusters. However, it could have looked a whole lot different if certain pieces hadn't fallen into place.
MOVIES・6 DAYS AGO
thefocus.news

Did Scarlett Johansson really sing in Sing 2? Fans are in awe of her voice

Did Scarlett Johansson actually sing in Sing 2? As her character Ash wows in the new release, fans have wondered if the actress was really singing. Sing 2, the sequel to the 2016 feel-good film Sing, sees the return of some familiar voices, including Taron Egerton, Reese Witherspoon and Matthew McConaughey, as their characters are back on-screen singing and dancing.
MOVIES・9 DAYS AGO
fashionista.com

There are perfectly good celebrity style moments, and then there are the looks that really stick with you, the ones you try desperately to recreate at home. In 'Great Outfits in Fashion History,' Fashionista editors are revisiting their all-time favorite lewks. The Golden Globes may not be as much of...
DESIGNERS & COLLECTIONS・5 DAYS AGO
Variety

In awards season, the word “snub” gets overused in a major way. A snub, in life, is a deliberate dis. The essence of it is that it’s personal. When an actor fails to make the cut of nominees for a movie award, to call that a snub is to make it sound like a conspiracy — an omission with a hint of design, rather than what it is, which is an accident or, really, a preference. It’s an insult to those who did get nominated, as if they were mere placeholders for the hallowed star who got “snubbed.” But Kristen Stewart’s...
CELEBRITIES・2 DAYS AGO

By now it’s no secret that Miuccia Prada and Raf Simons love to mix it up with highbrow creatives. Nearly a year ago, the co-creative directors hosted a post-show virtual panel discussion following its fall ’21 women’s runway presentation that featured actress Hunter Schafer, director Lee Daniels, architect Rem Koolhaas and designer Marc Jacobs for a conversation on optimism during the pandemic, among other topics. While the post-show Q&A is clearly a Prada tradition, the brand is also beginning to imbed its actual collections and shows with the minds it admires. For its fall ’22 men’s runway show, which it presented...
DESIGNERS & COLLECTIONS・1 DAY AGO
arcamax.com

Megan, 35 - who has Noah, nine, Bodhi, seven, and Journey, five, with her ex-husband Brian Austin Green - loved the proposal and "thought it was beautiful and perfect". The insider told People: "She is excited to get married." The loved-up duo first started dating in May 2020 after meeting...
CELEBRITIES・5 DAYS AGO
enstarz.com

Kate Middleton reportedly started preparing for the coming of her fourth child with Prince William, a new report claimed. In the past years, royal astrologers constantly predicted that Meghan Markle and Kate would give birth to more royals soon. This year, the Duchess of Sussex already welcomed her second and youngest child with Prince Harry, Lilibet Diana.
CELEBRITIES・20 DAYS AGO
GlobalGrind

Head inside for some awesome throwbacks and more recent shots, as we wish the icon a blessed day.
CELEBRITIES・4 DAYS AGO

Ever since they began dating in 2013, socialite Lauren Silverman has made her fiancé, Simon Cowell, feel like one lucky guy! Although fans never imagined it would happen, the beloved TV star found his one true love and has been living a life of bliss ever since. In January...
CELEBRITIES・5 DAYS AGO
Footwear News

Machine Gun Kelly and Megan Fox look like the perfect fashion power couple. The “Born with Horns” rapper and the “Transformers” star attended the Dolce & Gabbana fall ‘23 show, where they got snapped on the red carpet. MGK opened the show and played a musical selection while wearing a while bedazzled and crystallized suit. For the red-carpet ensembles, MGK donned an emblazoned black suit that featured crystals, eyelets, grommets and everything else of the sort plastered all over the two pieces. He accessorized with gloves that matched the glittery flair of the suit, two distinct rings hanging from his lips...
BEAUTY & FASHION・2 DAYS AGO
extratv

Betty White would have celebrated her 100th birthday today. In honor of the occasion, her assistant Kiersten shared a photo of Betty taken less than two weeks before her passing. Kiersten wrote on Betty’s Facebook, “It was taken on 12/20/21. I believe it’s one of the last photos of her. She was radiant and beautiful and as happy as ever. Thanks to all of you who are doing kind things today and every day to make the world a better place.
CELEBRITIES・12 HOURS AGO
Insider

Machine Gun Kelly proposed to Megan Fox with a special ring that included their birthstones.
CELEBRITIES・2 DAYS AGO
Footwear News

Hailey Bieber gives a lesson in color with her latest look. The model was spotted yesterday out and about in Los Angeles with Alexa Demie, a star on HBO’s “Euphoria”, while wearing a casual, functional outfit. For the ensemble, Bieber donned a white cropped polo-style button-up short sleeve top paired with a long-sleeve waffle-knit cropped shirt for a layered effect. On the lower half, she threw on a pair of pink stretch pants that added a pop of color. She accessorized the moment with dainty necklaces, gold hoop earrings and square black sunglasses. When it came down to footwear, Bieber opted for...
LOS ANGELES, CA・2 DAYS AGO
Ok Magazine

Sister Wives stars Christine and Meri Brown are in hot water with some of their fans due to their ties to Lularoe, a clothing company that has recently been mired in controversy. Article continues below advertisement. Both tv personalities list themselves as a "Lularoe Retailer" on their Instagram accounts and...
CELEBRITIES・2 DAYS AGO
Us Weekly

A Match Made in Hollywood! Jason Bateman and Wife Amanda Anka’s Relationship Timeline

Friends to lovers! Jason Bateman and his wife, Amanda Anka, knew each other for a decade before they started dating — and they say their long friendship is one of the reasons their romance has lasted. “Our marriage has defied the odds and works really well,” the Arrested Development...
CELEBRITIES・3 DAYS AGO
HelloBeautiful

When Regina King is not blowing us away in projects like "Watchmen" and "The Harder They Fall," she's turning heads with her effortless style.
CELEBRITIES・2 DAYS AGO