'A can of worms has been opened by this': Damon Hill fears let off for Max Verstappen after his controversial clash with Lewis Hamilton in Brazil could change how drivers race... and he fears a similar incident between the title rivals 'may happen AGAIN'

Damon Hill believes the decision to let Max Verstappen off in regards to his controversial battle against Lewis Hamilton at the Sao Paulo Grand Prix will have a huge affect on how drivers now race in Formula One.

After new evidence emerged of the Dutchman appearing to force his chief title rival off the circuit while defending the lead at Interlagos, the race stewards rejected a review request from Mercedes having initially branded the move on lap 48 as a 'racing incident'.

Many drivers, fans and pundits were split over the incident. Some saw Verstappen's actions as deliberate with his car having been nowhere near the apex of the corner, as he also went off the track to defend from Hamilton who had to take evasive action around the outside. 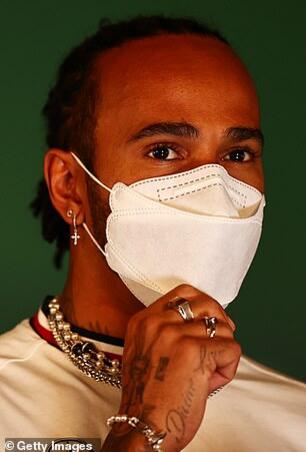 However, there was no clear evidence that Verstappen's motive was to force Hamilton off the road, as the fresh evidence of his on-board camera showed he never steered towards his opponent who was trying to pass around the outside of the corner.

Hill though fears that the act itself will now give every driver a precedent to act by in future races and that it could alter how overtakes are made and defended in the sport.

'The worry is a can of worms has been opened by this,' the 1996 world champion told Sky Sports.

'How does a driver now approach their overtake or defending manoeuvres - can they just run someone off the track?

'[Mercedes boss] Toto [Wolff] wanted to raise this issue to get clarification going to the next few races because it may happen again.'

Asked on Thursday if he would make the manoeuvre again, Verstappen said: 'Yes. As a driver, you know exactly what you can and can't do in the car.

'We were fighting hard, braking late into the corner, and the tyres were worn. If I had turned more abruptly to the left he would have just spun off.'

Hamilton, who produced one of his most outstanding drives to grab his 101st career win, was uncomplaining immediately afterwards, but on Thursday said: 'It is difficult to judge when you haven't seen all the angles. I've relooked at it and I have a different viewpoint, naturally, now.'

Valtteri Bottas has left the Brackley-based Mercedes team for the 2022 season of Formula1 after spending five successful years with the team. During his tenure at Mercedes Valtteri was able to win five consecutive constructors’ championships alongside Lewis Hamilton. It has been stated in Essentiallysports that according to former...
MOTORSPORTS・1 DAY AGO
Daily Mail

NIK SIMON'S GAIN LINE: Manu Tuilagi has eye on 2023 World Cup while Love Island producers are set to be left disappointed in their pursuit of Wales lock Christ Tshiunza

Manu Tuilagi is ready to commit to making the 2023 World Cup by signing another contract extension at Sale. The 30-year-old centre, whose power is unrivalled in English rugby, is set to take up an option to extend his stay in Manchester for one more season. The decision means Eddie...
RUGBY・1 DAY AGO