Here are the states where the most Americans quit their jobs in September when a record 4.4 million walked out 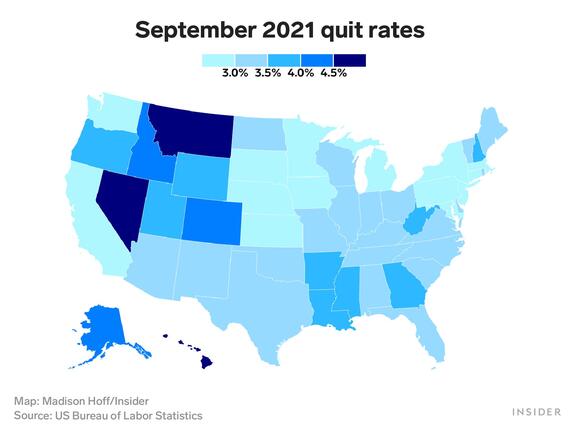 New data shows which states saw the most people quit their jobs in September when a record 4.4 million Americans walked out of work .

Overall, the labor shortage is slowly fading. Job openings dipped to 10.4 million in September , signaling more Americans took jobs that month. But record quits signal the workers are still in an unusual state of flux, and like many aspects of the pandemic recovery, the wave of walkouts is extremely uneven.

Hawaii saw the biggest leap, with its rate surging 3.8 percentage points through September. Montana followed with a 1.5 point gain, while Nevada and New Hampshire notched increases of 1.1 points each.

As far as total quits go, Texas came in with the largest increase of 69,000. Roughly 40,000 workers walked out in California, and Colorado saw 25,000 residents quit. To be sure, all three states are among the most populous in the US, and their quit rates aren't among the country's highest.

Some of the most quit-heavy states in August saw walkouts quickly fade. Kentucky no longer has the country's highest quit rate after a 1.1 percentage point decline in September — the largest decrease that month. South Dakota, Georgia, and Kansas also saw quits slow into the fall.

The data suggests states with smaller populations and fewer metropolitan hubs are still scrambling to stave off quits and revive their pre-crisis labor markets. Recent months have seen businesses raise wages as they rush to attract workers and fill job openings. But where some states are finding it difficult to fill job openings, others are also contending with a wave of resignations.

Reasons for such high quit rates are plentiful. COVID cases are still at elevated levels, and as booster shots come due, some workers might just want to avoid workplaces for their own health. Expensive child care costs could be forcing parents to leave work and shift their attention to their kids. And those in low-paying jobs — particularly in the pandemic-hammered service sector — may be looking for higher pay or better conditions while openings are so plentiful.

Yet the states with the most quits aren't home to the most openings. Openings rates were the highest in Alaska, Georgia, and Massachusetts in September, according to BLS data.

Quit-heavy states Montana and Nevada posted fairly high openings rates of 7.1% and 7.0%, respectively. Yet Hawaii has the country's largest imbalance by far. The Aloha State was home to both the highest quit rate and the lowest openings rate in September, signaling a major gap between workers' plans to stay employed and their hiring prospects.

To be sure, the monthly data is volatile and lags other indicators of US hiring. The October payrolls report showed job growth rebounding as the Delta wave faded, and if the pace holds, it's likely the labor shortage will fade even faster.

Still, the Friday report shows the United States is anything but united in its labor market recovery. While the most populous states are slowly matching workers with jobs, others are enduring unprecedented mismatches between worker demand and employee dissatisfaction.

States With the Most Job Openings

The COVID-19 pandemic sent the U.S. unemployment rate up to a post Great Depression high of 14.7% in April 2020. Though the jobless rate has since fallen back below 4%, the U.S. job market is far from pre-pandemic norms in at least one other key measure – labor supply.  The U.S. is currently grappling with […]
JOBS・23 HOURS AGO
24/7 Wall St.

States Where the Most People Are Quitting Their Jobs

The COVID-19 pandemic sent the U.S. unemployment rate up to a post Great Depression high of 14.7% in April 2020. Though the jobless rate has since fallen back below 4%, the U.S. job market today is far different from pre-pandemic norms. One difference is that Americans are now quitting their jobs at a historic pace. […]
ECONOMY・1 DAY AGO
24/7 Wall St.

A recent analysis reveals that Nebraska was the state with the largest decline in the percentage of people unemployed between December 2019 and December 2021.
NEBRASKA STATE・23 HOURS AGO
24/7 Wall St.

States Where Lightning Strikes the Most

As children, often nothing seems scarier than thunder and lightning. Where you live, though, makes a difference as to how many lightning storms you’re likely to endure. Some parts of the United States are more prone to them than others, due to climate, elevation, and natural (and unnatural) conductors.  While it might be the thunder […]
ENVIRONMENT・1 DAY AGO

Stimulus Update: Extra Stimulus Money Is Coming for Residents in These 4 States in 2022

Hoping for more stimulus money in 2022? If you're a resident of one of these four states, you may be in luck.
BUSINESS・3 DAYS AGO
Jennifer Geer

Thinking of quitting your job? You wouldn't be the only one. (CHICAGO) There have been many signs lately showing the burnout and frustration American workers have been feeling in their jobs. From restaurant workers to grocery store clerks to healthcare workers, every industry has suffered hardships from the pandemic.
CHICAGO, IL・4 DAYS AGO
Florida Star

It’s official, America has entered the Great Resignation. In August, 4.3 million Americans quit their jobs, and the quit rate, measured by the government against total employment, rose to 2.9 percent in August. But that was August. According to the Labor Department’s Job Openings and Labor Turnover Survey, November...
COLLEGES・6 DAYS AGO
CBS Atlanta

Americans Are Quitting At Record Rates. Georgia Leads The Pack.

WASHINGTON (CBS News) — A record number of American workers quit their jobs before the holidays, but the trend wasn’t evenly spread across the nation. Employees in a handful of states handed in their resignations at a much higher rate than the national average, according to new government data. About 4.5 million people quit their jobs in November, an all-time high, the government said earlier this month. But on Friday, the Labor Department provided a state-by-state peak at where workers are quitting, noting that 22 states experienced an increase in the so-called “quits rate” in November, while only 2 states experienced a decline in worker resignations. The states with the highest quits rates are those experiencing tight labor markets and low unemployment rates — exactly the combination that’s causing employers to dangle incentives like higher wages and better benefits to lure new workers to their open jobs and keep the ones they already have. It’s all part of the so-called “Great Resignation,” which is marked by workers leaving their current jobs for a number of reasons, ranging from starting their own businesses to opting for early retirement. Click here for more details from CBS News.
GEORGIA STATE・7 DAYS AGO

A record number of American workers quit their jobs before the holidays, but the trend wasn't evenly spread across the nation. Employees in a handful of states handed in their resignations at a much higher rate than the national average, according to new government data. About 4.5 million people quit...
ECONOMY・7 DAYS AGO
Midland Reporter-Telegram

Inflation is wiping out pay increases for most Americans

Ty Stehlik, who works the front desk at a hotel in Milwaukee, pleaded for a raise all through the pandemic - and finally got an extra $1-an-hour in the fall to make $15. But higher prices for rent and food have completely negated that 7% bump. Stehlik, who identifies as nonbinary, says they're still relying on family for help covering rent and groceries.
BUSINESS・7 DAYS AGO
wymt.com

LEXINGTON, Ky. (WKYT) - Kentucky once again ranks among the worst states for people quitting their jobs as labor shortages continue to plague employers. In a three-way tie with Georgia and North Dakota, the Bluegrass State ranked second for the largest “quit rate” increase in November. In August, Kentucky held the dubious title of the single largest increase.
KENTUCKY STATE・7 DAYS AGO
Anchorage Press

As workers continue to leave their jobs en masse, the phenomenon known as the “Great Resignation” seems to be far from over. According to data from the Bureau of Labor Statistics, quits totalled 4.5 million in November, a record high, and have been trending upward since April 2020. The quit rate—defined as the number of quits as a percentage of total employment—rose to 3.0% in November, tying September’s record.
ALASKA STATE・9 DAYS AGO

Experts ranked the most beautiful states in the U.S. Here’s where Florida ended up

With its concrete jungles, ongoing construction, packed highways and deteriorating condos desperately reaching skyward away from the floodwaters, Florida is truly one of the most beautiful states in the country. At least, it is according to photography and printing experts Printique, which ranked the states in order of beauty and...
FLORIDA STATE・11 DAYS AGO
World Economic Forum

The Great Resignation record: How many Americans left their jobs in November 2021?

The number of Americans quitting has now exceeded pre-pandemic highs for eight straight months, as employers struggle to fill open positions. One major driver of The Great Resignation appears to be that many workers are no longer willing to put up with the pay and/or working conditions they accepted before the pandemic.
ECONOMY・11 DAYS AGO
ksjbam.com

States Where Residents Are Spending the Most on Groceries

The current run of inflation in the U.S. economy is putting pressure on household finances nationwide. The second half of 2021 saw several consecutive months of higher than usual price increases, reaching an overall 6.8% rate of inflation from November 2020 to November 2021. Wages have also grown in recent months but not at a rate fast enough to keep up with inflation, which is squeezing families’ budgets in key spending categories like housing, energy, transportation, and food.
ECONOMY・11 DAYS AGO
advantagenews.com

A new report of the top 180 cities in America to find a job shows only two Illinois cities on the list as the state continues to struggle in the job market with 5.7% of its residents unemployed, according to the Bureau of Labor Statistics. The report was done by...
ILLINOIS STATE・12 DAYS AGO
The US Sun

AMERICANS could be getting a huge $1,504 EBT payment in days as part of an extra round of benefits that have been announced. The emergency benefits are available for SNAP applicants who need immediate food assistance, with payments up to $1,504 offered depending on need. Interest applicants must apply for...
ADVOCACY・2 DAYS AGO
Motley Fool

1 Big Reason So Many Americans Are Quitting Their Jobs

If you've been hearing a lot about 'The Great Resignation' lately, you're not alone. Why and how are so many people quitting their jobs, even as inflation lingers, we enter another pandemic year, and the unemployment rate is declining? In this segment of Backstage Pass, recorded on Jan. 5, Fool contributor Rachel Warren dives into one of the major reasons that may explain why so many people are disappearing from the labor market right now.
BUSINESS・33 MINUTES AGO
The US Sun

ABOUT 8million Americans receive Supplemental Security Income (SSI), and for many, it's still not enough to pay for the basic necessities. Some recipients may see a boost as states add funds to the monthly checks. The Supplemental Security Income program provides financial support to needy persons aged 65 or older,...
BUSINESS・3 DAYS AGO
Wyoming News

(The Center Square) – The majority of Americans think the rise in inflation last year will only get worse in 2022, according to a new poll. Gallup released polling data Wednesday showing that 79% of surveyed Americans “predict inflation will go up," with 50% saying it will go up "a lot." Those are the most pessimistic numbers on inflation ever recorded by Gallup, the pollster said. Americans are split on...
BUSINESS・2 DAYS AGO