Chris Long on Joe Burrow: He 'High Key Reminds Me of (Tom) Brady' 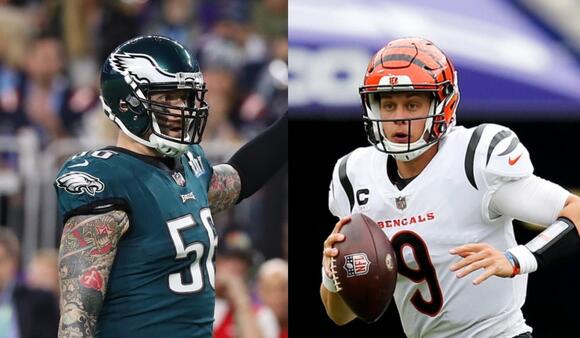 CINCINNATI — Joe Burrow has drawn comparisons to some of the best quarterbacks to ever play the game over the past two years.

The 24-year-old is off to an impressive start this season and has the Bengals in position to potentially make the playoffs for the first time since 2015.

If Cincinnati is going to make the postseason, then Burrow is going to have to have a big second half of the season.

Long and Brady were teammates in 2016 during a season that ended with the Patriots' improbable comeback against the Falcons in Super Bowl LI.

If anyone is qualified to make the comparison, it's Long. He played against Brady on the highest stage and watched the legendary quarterback orchestrate the best comeback in Super Bowl history.

Time will tell if Burrow can become one of the all-time greats, but it isn't the first and probably won't be the last time he's compared to an NFL legend.

Make sure you bookmark All Bengals for the latest NFL news, exclusive interviews, film breakdowns and so much more!

Depth Chart Released: Who Will Be the Bengals' Kick Returner?

Jessie Bates on First 9 Games: "My Mind Was on Other Things"

Will Eli Apple Start in Week 11 Against Raiders?

Will Bengals Pull Back Reins on Joe Burrow?

Be sure to keep it locked on All Bengals all the time!

Tom Brady was called for unsportsmanlike conduct during this afternoon’s loss to the Los Angeles Rams, the first such penalty of his NFL career. On the play, Brady thought he was the victim of an illegal helmet-to-helmet hit. When he voiced his displeasure with the no-call, referee Shawn Hochuli hit him with a 15-yard penalty.
NFL・1 DAY AGO
Ok Magazine

All eyes have been on Aaron Rodgers after the Green Bay Packers lost their playoffs game 10-13 over the weekend. The team lost to the San Francisco 49ers on Saturday, January 22. The 38-year-old admitted after the game that he was feeling "numb," telling reporters: "I didn’t think it was gonna end like this," per Fox News.
NFL・1 DAY AGO
CBS Boston

By Michael Hurley, CBS Boston BOSTON (CBS) — What is a once-in-a-lifetime comeback if it happens twice? What is the level of heartbreak reached when that comeback is completed, only for it to all be rendered meaningless in a flash of a few seconds? And what in the wide freaking world of sports is there to say about the football game that took place in Tampa on Sunday afternoon? It was a game which the Bucs lost to the Rams countless times. While falling behind 10-0, then 20-3, they were toast. In failing to protect Tom Brady, in blowing coverages against Cooper Kupp and getting...
NFL・1 DAY AGO
USA TODAY

Tom Brady's lip was bloodied after a hit by Von Miller, and the Bucs QB's reaction to referee Shawn Hochuli earned him a penalty.
NFL・1 DAY AGO

Joe Burrow Makes Bold Declaration After Bengals' Win Over Titans: 'We're Coming for It All'

NASHVILLE — The Bengals were underdogs going into Saturday's game against the Titans. Ultimately, they won 19-16 and advance to the AFC Championship Game for the first time since 1988. They'll play Buffalo or Kansas City for a chance to go to the Super Bowl. They'll be underdogs in...
NFL・2 DAYS AGO
The Spun

Buccaneers head coach Bruce Arians doesn’t want quarterback Tom Brady to feel rushed in making a decision for next season. There have been numerous rumors the last few days on how Brady may call it a career after this season, but there’s been no formal announcement. Arians confirmed...
NFL・1 DAY AGO

By Michael Hurley, CBS Boston BOSTON (CBS) — It’s a bit illogical for the most valuable player in the NFL to have such a difficult time winning Super Bowls. Alas, the gift of greatness has been an onerous burden for quite some time. And it appears as though the curse of winning the NFL MVP Award will live on for another year. While we don’t know that Aaron Rodgers will take home the hardware as the NFL MVP this year, all signs are pointing that way. He didn’t have the volume stats of Tom Brady, and he missed a game due to COVID, but Rodgers’ 37...
NFL・2 DAYS AGO
USA TODAY

Opinion: Aaron Rodgers 'silenced' from Super Bowl platform, and we can thank Robbie Gould for that

San Francisco kicker Robbie Gould did the NFL a favor by keeping Aaron Rodgers from the Super Bowl where the QB could spread more misinformation.
NFL・2 DAYS AGO
The Spun

NFL World Reacts To What Rex Ryan Said On Sunday

Never one to hold his tongue, former NFL coach and current ESPN personality Rex Ryan took a not-so-thinly veiled shot at Bill Belichick on Sunday. During a segment on “Sunday NFL Countdown,” Ryan spoke on the possibility of Tom Brady retiring after the season. “The reason the Bucs...
NFL・2 DAYS AGO
USA TODAY

Tom Brady on retirement question after Buccaneers' loss: 'I haven't put a lot of thought into it'

Amid questions about whether he will return for his 23rd season in the NFL, Tom Brady said he had no concrete plan after the Bucs' season-ending loss.
NFL・1 DAY AGO

At 44 years old and having just finished his 22nd season, Brady could opt to call it a career once and for all.
NFL・1 DAY AGO
Sports Illustrated

Tom Brady talked to Al Michaels and Cris Collinsworth about his possible retirement before Rams-Buccaneers, and gave an evasive answer about the matter.
NFL・1 DAY AGO
MassLive.com

Tom Brady may seriously mull retirement: ‘It pains (Gisele) to see me get hit out there’

At 44 years old, Tom Brady is discussing retirement in a way he never has before. There have been a number of reports the quarterback is seriously contemplating it — he’s long said he wants to play until he’s 45 — and Brady seemed to confirm that he’s mulling retirement on Monday night. On his Sirius XM “Let’s Go!” podcast with Larry Fitzgerald and Jim Gray, Brady said, “there’s no really rush for me to figure out what’s next.”
NFL・19 HOURS AGO
Detroit Sports Nation

Tom Brady addresses report that he is considering retirement [Video]

Following Sunday’s NFC Divisional Round playoff loss to the Los Angeles Rams, Tampa Bay Buccaneers QB Tom Brady commented on the report that he will consider retirement at the conclusion of this season. “I haven’t put a lot of thought into it. So, we’ll just take it day by...
NFL・1 DAY AGO
Los Angeles Times

Rams vs. Tampa Bay Buccaneers matchups, start time and how to watch

Breaking down the matchups for the Los Angeles Rams and the Tampa Bay Buccaneers before their NFC divisional-round playoff game Sunday in Tampa, Fla.
NFL・2 DAYS AGO
Los Angeles Times

'This is officially lunacy': The eight crazy plays that capped the Rams' win

Recapping wild fourth quarter of the NFC divisional playoff game between the Buccaneers and Rams, who blew a 24-point lead before winning on the final play.
NFL・1 DAY AGO
Los Angeles Times

Sean McVay has had a good run during his years with the Rams, except against is old pal Kyle Shanahan, coach of the 49ers. They've beaten McVay six times in a row.
NFL・16 HOURS AGO