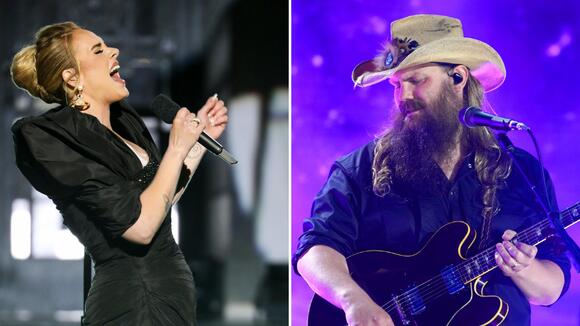 Adele has finally released her highly-anticipated fourth album, 30 , and the singer has released a bonus version of the record's first single , " Easy On Me ," now featuring Chris Stapleton . The song was first teased when Adele sat down with Vogue for their "73 Questions" series where she named Stapleton as her dream collaboration .

Fans soon flew into a frenzy with the news that Adele wanted to collaborate with Stapleton, but none expected that the two had already recorded a duet. Upon revealing the tracklist for 30 , Adele shared with fans that a deluxe version of her album's first single, "Easy On Me," would feature Stapleton.

Ahead of Adele's release of 30 , the singer joined CBS for a concert special, Adele One Night Only . She also sat down with Oprah Winfrey , opening up about how her divorce inspired her to write 30 . The album also serves as an open letter to her son for the questions he may have been too afraid to ask as his parents were separating.

30 landed on November 19, with Adele citing it as her "most personal and most vulnerable" record. While many of the songs see Adele confronting herself after filing for divorce, other songs find the singer taking a step back out into the dating scene, and how she struggles to find love after leaving a long relationship.

Adele is not the only singer Stapleton has teamed up with in recent weeks. The country star has proven himself to be more than busy, and he joined Taylor Swift for her re-recorded version of Red . Stapleton helped provide vocals for Swift's single " I Bet You Think About Me ," which had been released last week.

“I don’t think I ever know,” said Chris Stapleton on whether he’s aware he has a hit song on his hands. “The win is finishing the song.”. Interviewed on 60 Minutes in December 2021, during a two-night run of shows at the Bridgestone Arena in Nashville, Stapleton spoke about the art, or lack thereof, of knowing when you’ve written that No. 1.
MUSIC・2 DAYS AGO
The Staten Island Advance

Montreal vineyard where Adele filmed ‘Easy on Me’ music video is selling for $4.4M

Adele has an eye for design when choosing filming locations for her breakout single “Easy on Me.” About 90 minutes outside Montreal, there lies the 173-acre vineyard Domaine Dumont Chapelle Ste-Agnès, which is now for sale, priced at $4.37 million according to TopTenRealEstateDeals.com. This elegant and exclusive...
REAL ESTATE・6 DAYS AGO
CBS News

The 43-year-old has collaborated with some of music’s biggest names and won five Grammys, but stardom has never seemed to be the goal for Chris Stapleton. Sharyn Alfonsi reports.
MUSIC・3 DAYS AGO
hot96.com

Adele joins exclusive chart club, thanks to ’30”s six-week stint at number one

When Does Chris Stapleton Know He Has a Win as a Songwriter? [VIDEO]

Chris Stapleton was the focus of a 60 Minutes profile Sunday (1/16). He shared with CBS’s Sharyn Alfonsi when he knows he has a win as a songwriter. “I don’t think I ever know that. The win is finishing the song. There are a lot of songwriters who will claim, yeah, I knew the instant that we wrote this one that it was a six-week number one, and I was gonna get a big giant check in the mail. I really just think those guys are full of S-beep. I don’t think anybody knows that.”
MUSIC・1 DAY AGO
iHeartRadio

Watch Travis Barker Give Adele's 'Easy On Me' A Rock Makeover

Adele knows who to call if she's looking for a new drummer.
MUSIC・14 DAYS AGO
thatgrapejuice.net

Another week means another win for Adele. The British belter’s colossal comeback single ‘Easy On Me’ has extended its reign at #1 on the Billboard Hot 100. It serves as the eighth non-consecutive week the ’30’ lead track has reigned atop of the converted count.
CELEBRITIES・8 HOURS AGO
CBS News

Inside the recording studio with Chris Stapleton and producer Dave Cobb

Chris Stapleton and producer Dave Cobb deconstruct their recording process and why Morgane Stapleton is often the “voice of reason” in the studio.
MUSIC・3 DAYS AGO
CMT

Chris Stapleton Doesn’t Believe Writers Can Predict a No. 1 Song

Chris Stapleton thinks people who say they know a song is a hit when they write it are full of crap. Stapleton, who will be featured on “60 MINUTES” at 8 p.m. Sunday on CBS, said the only barometer he trusts is people. View a clip of the...
MUSIC・6 DAYS AGO
Outsider.com

Chris Stapleton Profiled on ’60 Minutes’ on Sunday Night: ‘You Have to Take It to the People’

If there’s anyone who’s an expert in songwriting, it’s country music icon Chris Stapleton. He’s written nearly 200 songs, six of which went number one. But when he was recently asked in an interview about knowing when a song is a hit, the Grammy award winner said it’s up to the people to decide that.
MUSIC・5 DAYS AGO
Whiskey Riff

Chris Stapleton Says He Grew Up Listening To Dr. Dre And Snoop Dogg: “It Was So Real”

Everybody knows that Chris Stapleton has the most diverse arsenal of genres in all of music. I mean seriously, whether it’s straight up country, soul, R&B, blues… the man can do it all, and better than just about anybody. It’s no surprise his services have been requested by everybody from Adele and Taylor Swift, to Pink, Carlos Santana, Morgan Wallen, Tom Morello, Ed Sheeran… the list is endless. But I’ll be the first to admit, taking one glance at the […] The post Chris Stapleton Says He Grew Up Listening To Dr. Dre And Snoop Dogg: “It Was So Real” first appeared on Whiskey Riff.
MUSIC・2 DAYS AGO

"I'm good at being me on guitar": Chris Stapleton on his life and career

His contemporaries will tell you he's among the best country music has these days. Kentucky-bred Chris Stapleton is a triple threat: a powerfully gifted singer, prolific songwriter and skilled guitar player. Now 43 years old, his talents have connected with music fans across generations and genres. He's collaborated with artists like Adele, Pink and Carlos Santana, won five Grammy awards and is up for another three this year. But Chris Stapleton wasn't looking for accolades or stardom when he came to Nashville. He was a storyteller… and he invited us backstage to hear his.
KENTUCKY STATE・3 DAYS AGO
iheart.com

If you've ever been to a Chris Stapleton show, his music does the talking. He's not one to chat it up onstage, so it was a real treat to hear and see Chris share some of his thoughts about music and share the "Band Cave" on camera. The Band Cave...
MUSIC・2 DAYS AGO
Outsider.com

Festivals and rodeo’s are back in action this year, and you know what that means! That’s right, RodeoHouston recently announced the lineup for this once-a-year event. Furthermore, this year is going to be unforgettable, especially with RodeoHouston right around the corner. In previous years, country superstars put on...
MUSIC・13 DAYS AGO
iHeartRadio

Miranda Lambert is taking fans behind the scenes of her latest music video, "If I Was A Cowboy."
CELEBRITIES・4 HOURS AGO
energy941.com

Adele‘s “Easy on Me” remains the top song in the country, spending its ninth week atop the Billboard Hot 100 — but a song from the Disney film Encanto is hot on her heels. Billboard reports that Encanto‘s viral track “We Don’t Talk About Bruno” hit...
MUSIC・1 DAY AGO
AceShowbiz

The black-and-white footage, which features a python, a horse as well as a burning wooden chair, is helmed by 'Rolling In The Deep' video director Sam Brown. AceShowbiz - Adele's "Oh My God" has got music video treatment. The visuals, which was released on Wednesday, January 12, sees the English singer performing the track along with multiple versions of herself.
MUSIC・6 DAYS AGO