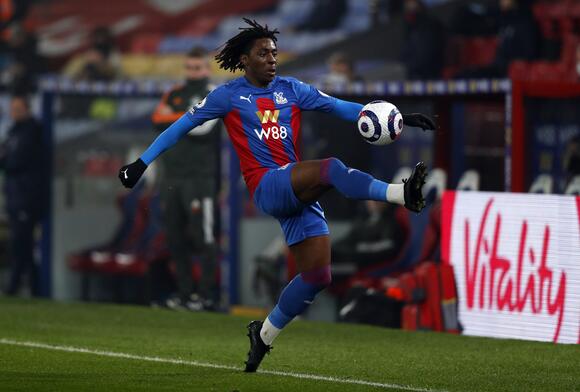 Patrick Vieira has revealed Ebere Eze will be part of the Crystal Palace squad again for the trip to Burnley but has stressed the need for patience with the playmaker.

The former England youth international is back in contention for the first time since May when he sustained an Achilles injury which brought a successful first campaign at Selhurst Park to a premature end.

Eze returned to training in October but has stepped up his recovery during the last month with two appearances for Palace’s Under-23s and a friendly cameo to convince his manager he is ready to feature in the Premier League.

Vieira said: “Eze will be part of the group that will travel to Burnley.

“Obviously he is a talented player but he still has a long way to go from his best. We have to remind ourselves he will need time to get to where he was because of the injury he had but he will get there.

“He is building up his confidence week after week. He played the two games with the Under-23s, we played an in-house game, a friendly one, and he was feeling really well. He is improving but we have to give him time to get to where he was before his injury.”

The ex-QPR attacker was one of Palace’s most impressive players last season, scoring four times and providing six assists during his maiden top flight term.

Eze played on the left of a midfield four under Roy Hodgson , but Vieira, who has used a 4-3-3 formation during his time at Selhurst Park, has a different plan for the 23-year-old.

“My own responsibility is to find the best role that will allow him to express his talent and I believe that is more in the central area,” the Palace manager added.

“He is the type of player who likes to touch the ball but we try him inside as well as in the midfield three as a number 10 and he was really good. There are a couple of positions where I believe he can help the team to perform.”

Eze’s return is timely with James McArthur out for the foreseeable future with a hamstring injury.

While captain Luka Milivojevic is set to be recalled at Burnley, Eze will expect to push for a place in Palace’s midfield three when fully up to speed but for now the Eagles are contemplating the loss of one of their longest-serving players.

“James has a hamstring issue and he is going to be out for the next couple of weeks,” Vieira revealed.

“He is part of the leaders of the team and he brings energy, experience and competitiveness, but we have a squad.

“Injuries give the opportunity to someone else, who has not played very much, to come and take that chance.”

​Crystal Palace pull out of race for Juventus midfielder Ramsey

Crystal Palace are distancing themselves from a move for Juventus midfielder Aaron Ramsey. The Welshman is likely on his way out at the Italian club, but is resisting efforts from Juventus to sell or loan him. According to the Daily Mail, Palace are now walking away from their interest in...
PREMIER LEAGUE・1 DAY AGO
Tribal Football

St Etienne remain convinced of signing Crystal Palace striker Jean-Philippe Mateta this month. On-loan from Mainz, Mateta has struck a sudden rich seam of goalscoring form with Palace, leading to talk of manager Patrick Vieira rejecting previous plans of sending him back to Germany this month. However, Le Porgres is...
PREMIER LEAGUE・1 DAY AGO
SkySports

The move started with a Joel Ward throw-in deep in Crystal Palace territory and ended, 58 seconds later, with Conor Gallagher firing an angled finish into the corner of the Brighton net. In between, the ball travelled through every Palace player, including goalkeeper Jack Butland. The patient, 20-pass build-up carved...
PREMIER LEAGUE・1 DAY AGO

CRYSTAL PALACE have reportedly pulled out of the race to sign Aaron Ramsey. The former Arsenal midfielder is pushing for a return to the Premier League after Juventus confirmed plans to sell him. Palace were among English clubs linked with Ramsey, who is believed to be open to working with...
PREMIER LEAGUE・1 DAY AGO
BBC

Jordan Ayew is available for Crystal Palace this weekend after returning from international duty with Ghana. Wilfried Zaha and Cheikhou Kouyate are still involved in the Africa Cup of Nations, while James McArthur and James Tomkins remain out. Liverpool's Alex Oxlade-Chamberlain could recover in time from the ankle problem he...
PREMIER LEAGUE・1 DAY AGO
The Independent

Crystal Palace boss Patrick Vieira has played down the absence of key Liverpool duo Mohamed Salah and Sadio Mane for Sunday’s meeting at Selhurst Park.The Reds will again be without their two main attackers, who are away competing at the Africa Cup of Nations in Cameroon.It will no doubt boost Palace, who lost 3-0 to Liverpool in September with the pair on target and both hit doubles against the south London outfit last season too.Jurgen Klopp’s side have coped well without Salah and Mane, winning three of the four games they have missed to progress in two cup competitions and...
PREMIER LEAGUE・10 HOURS AGO
Daily Mail

Crystal Palace pull out of the race to sign Juventus midfielder Aaron Ramsey, despite the £400,000-a-week former Arsenal star's interest in working with Patrick Vieira at Selhurst Park

Crystal Palace are walking away from their interest in Juventus midfielder Aaron Ramsey. The former Arsenal star has been heavily linked with a move to Selhurst Park in recent weeks - and it is understood there has been a tentative interest in Ramsey from Palace. But the Eagles have decided...
PREMIER LEAGUE・1 DAY AGO

Jurgen Klopp insists Liverpool will not get carried away and “celebrate like kids” over a first trip to Wembley in six years as there is business to be done in the Premier League.The 2-0 second-leg Carabao Cup win at Arsenal means a return to the national stadium for a domestic cup final for the first time since they lost to Manchester City in the League Cup during Klopp’s first season in 2016.But while Thursday’s result was a much-needed boost, Klopp insists the Reds cannot allow their focus to be distracted from keeping the pressure on Manchester City, who have an...
PREMIER LEAGUE・1 DAY AGO
The Guardian

Minute-by-minute report: Josh Sargent scored one of the goals of the season – if not the goal of the season – as Dean Smith’s team swept aside their relegation rivals. Scott Murray was watching.
PREMIER LEAGUE・21 HOURS AGO
The Independent

Arsenal are set to play host to Liverpool at the Emirates this evening with a place in the EFL Cup final on the line. The Gunners earned a strong position going into this game in extremely tough circumstances last week. Whilst missing a number of players for various reasons, and with Granit Xhaka getting himself sent off inside the opening 30 minutes, we managed to fight until the bitter end to earn a 0-0 draw.
PREMIER LEAGUE・2 DAYS AGO
San Diego Union-Tribune

Pressure is building on Eddie Howe. The Newcastle United manager takes his team to Elland Road tomorrow to face Leeds United desperately needing a win. The prospect of relegation is growing by the week. There are plenty of points still available and things can change quickly. St James’ Park insiders were talking about the importance of beating fellow strugglers before the 1-1 draw with Watford last week, speaking in terms of a mini-league of the bottom five sides in the table. Leeds were very much in the mix at that point but two consecutive wins for Marcelo Bielsa’s men changed...
PREMIER LEAGUE・1 DAY AGO
The Independent

Manchester United can leapfrog West Ham United with a win on Saturday, with both sides fighting for a top-four finish in the Premier League.It’s the Hammers who sit in fourth at present but they are only two points ahead of United having played a game more - while Tottenham, fifth, are in better form than both of these teams.The most recent trip back to his former club saw David Moyesemerge triumphant with a win in the Carabao Cup, but Ralf Rangnick holds hopes that his team are on the right path now, following a strong second-half showing and win over...
PREMIER LEAGUE・6 HOURS AGO
The Independent

Norwich City have been dealt a blow in their Premier League survival battle with goalkeeper Tim Krul set for a spell on the sidelines because of a shoulder problem.Dutchman Krul suffered the injury late on during the victory over Everton on Saturday and Norwich are awaiting confirmation of how long he will be unavailable.“Tim Krul is out. He hurt his shoulder, the ACL joints, in the last minute of the Everton win,” said boss Dean Smith whose side travel to relegation rivals Watford on Friday night where Angus Gunn is expected to deputise in goal.“I am not sure on...
PREMIER LEAGUE・2 DAYS AGO