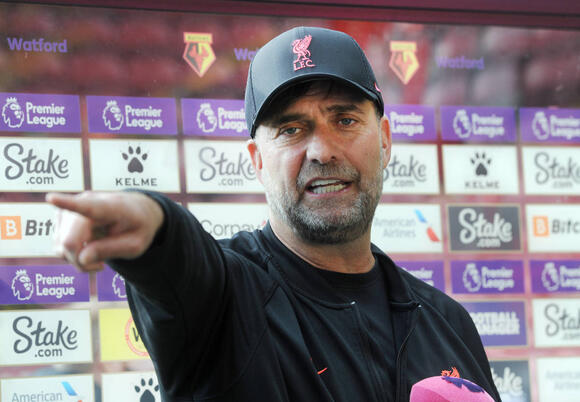 Liverpool manager Jurgen Klopp has addressed his own Anfield future in his press conference today.

The German's contract runs out in 2024, and with new Aston Villa boss Steven Gerrard saying he wants Klopp to sign a 'lifetime contract'.

"Wow! I thought Stevie said some nice things, smart things, made sure it was about Villa and Gerrard. I don't have to think about [my future] thank God. We are in the middle of the season. No other managers gets asked so often about 2 or 3 years away."

"It's over when it's over, but it's far away from being over, so let's focus on that."

There has been plenty of speculation looking ahead to Klopp's departure, with Gerrard himself constantly linked alongside assistant manager Pepijn Ljinders.

But as the current Liverpool manager rightfully says, there is two and a half years left on his deal - and who knows, he may sign an extension.

Will it be Steven Gerrard? He would have to succeed at Villa to have a shot at it, but that, to us, is probable.

Hopefully he's right about that lifetime contract, but even if he stays an extra few years, that would be enough for us.

Opinion: Can Liverpool Deliver More Success With This Current Squad?

Have Liverpool's most recent golden boys ran out of steam?. After a painful to watch 0-0 draw with Arsenal at Anfield, the question must be asked, how desperately do Liverpool need a revamp? They may still be in their Carabao Cup tie but the problems lay beyond Thursday's game. It...
PREMIER LEAGUE・2 DAYS AGO
The Guardian

Liverpool striker Mohamed Salah was on target as Egypt edged past Guinea-Bissau at the Africa Cup Of Nations and you can watch the goal here. The strike came in the 69th minute and was enough to help Egypt secure the three points leaving them second in Group B. Salah was...
FIFA・1 DAY AGO

Liverpool manager Jurgen Klopp has been speaking to the media in his press conference ahead of the Premier League clash against Brentford on Sunday and you can watch what he said here. The German will be hoping his team can bounce back from a disappointing performance on Thursday evening at...
PREMIER LEAGUE・2 DAYS AGO
LFCTransferRoom

Trent Alexander-Arnold spoke of last year's tough period and how important it was for the team to come out of the other end. Last season, Liverpool were hit with a huge injury list. The Reds were flying high at the top before Christmas, then at the turn of the new year, they lost many key players, especially in the defence.
PREMIER LEAGUE・2 DAYS AGO
The Independent

As reported by The Mirror, the German is keen to see the talented 20 year old fulfil his potential but felt the need to talk it through with the player. “I had a long talk last week with Curtis, because I love the boy and I love the potential he has.
PREMIER LEAGUE・1 DAY AGO
Yardbarker

An enthralling encounter at Villa Park ended 2-2 between Aston Villa and Manchester United, and you can watch the match highlights here. The Red Devils took a two goal lead through a Bruno Fernandes double before Jacob Ramsey pulled one back for Villa with 13 minutes left. Substitute Philippe Coutinho...
PREMIER LEAGUE・1 DAY AGO
LFCTransferRoom

Manchester United throw a 2-0 lead away agaisnt Steven Gerrard's Aston Villa and rival fans are loving it. LFCTR take a look at the reactions of rival fans, as former Liverpool player Philippe Coutinho is the man of the moment. Although Manchester United's ability to bottle matches is becoming the...
PREMIER LEAGUE・1 DAY AGO
The Independent

Steven Gerrard wants to keep Philippe Coutinho smiling after the Aston Villa debutant secured a hard-fought 2-2 draw that left Manchester United interim boss Ralf Rangnick deflated.Saturday evening’s Premier League encounter looked to be going the same way as their FA Cup tie at the start of the week, with Villa looking sharp but ultimately lacking a cutting edge against the Red Devils.A howler from Emiliano Martinez allowed Bruno Fernandes to open the scoring, with the Portuguese skipper adding another just as Villa threatened to level.Gerrard turned to former Liverpool team-mate Coutinho and got a dream response, with the Brazilian...
PREMIER LEAGUE・1 DAY AGO
fourfourtwo.com

Liverpool manager Jurgen Klopp hopes the fact this season is far from normal will give his side a chance of reeling in Premier League defending champions Manchester City at the top of table. A comfortable 3-0 victory over Brentford secured a first league win since mid-December and closed the gap...
PREMIER LEAGUE・18 HOURS AGO
LFCTransferRoom

Opinion: Is Jurgen Klopp a 'Yes Man' for FSG?

This may be a controversial topic but today we're going to delve into Jurgen Klopp and his relationship with Liverpool's owners, FSG. I want to preface this article by saying Jurgen Klopp and FSG have done great things for Liverpool FC over the years. I'm not FSG in or FSG...
PREMIER LEAGUE・2 DAYS AGO
LFCTransferRoom

Liverpool midfielder Fabinho has been speaking to liverpoolfc.com about the importance of the return of his Brazilian teammate Roberto Firmino. The number nine has had an interrupted season so far through injury and more recently Covid-19 but returned to the squad last weekend to score an audacious goal in the 4-1 FA Cup victory against Shrewsbury.
LIVERPOOL, NY・2 DAYS AGO