Graham Colton is having a full-circle moment in Oklahoma City 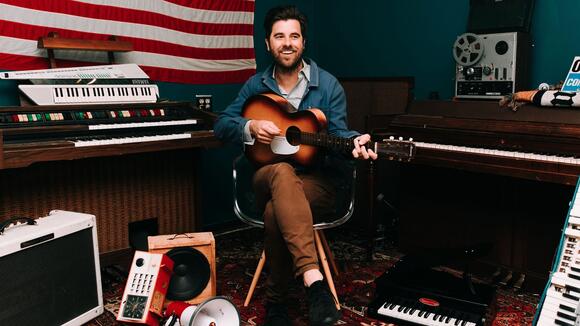 Graham Colton didn't want to be that guy.

"When we opened The Jones Assembly, when I first got the opportunity to kind of have my own place with my partners, everybody asked me, 'You gotta play the first show.' And I said, 'No, no, no. ... I don't want to do that,'" Colton recalled.

"But four and a half years later ... since we opened our doors, it just feels right. It feels fun. It feels like a time for us to celebrate and gather."

On the day before Thanksgiving, Colton — the Oklahoma City singer-songwriter who became a restauranteur, venue operator and civic leader — will take the stage that he helped build with operating partners Brian Bogert, Scott Marsh and Courtney Mankin. The Nov. 24 show won't just be his first at The Jones: It will be his first concert in seven years, a hiatus he couldn't have fathomed 20 years ago when he set out on his music career.

"I have a lot of things that I'm just really thankful for: I'm right where I need to be. What I know here in 2021 is that things worked out exactly the way they should have — and life is kind of like that. And that's what a lot of my songs are about," Colton said.

When Colton graduated in 1998 from Heritage Hall, where he was the all-state quarterback on the state championship football team, he had a clear vision for what he wanted to do with his life. The OKC native headed south to Southern Methodist University with plans to do more of what he had already started in his hometown: writing and performing songs.

"You throw COVID in there, and you can take some liberties with your mathematics. But it's the 20th anniversary of my first self-titled release, which was seven songs that I recorded my freshman year of college when I moved to Dallas," he said.

Those songs found their way to some record companies and well-known musicians, including Adam Duritz of Counting Crows. The newly formed Graham Colton Band was tapped to join the Crows on their 2002 "Hard Candy Tour," which led to four years of touring with the likes of Dave Matthews Band, John Mayer, Maroon 5, Kelly Clarkson, Needtobreathe and Jason Mraz.

Colton inked a deal with Universal Records, had his first hit song with "Best Days" and made the rounds performing on TV talk shows.

"In those early days, it all happened so quickly — and it kind of did happen the way I thought it would. It was sort of like, 'I'm going to write these songs, I'm going to form a band, I'm going to get in a van, I'm going to tour, and I'm just going to keep going,'" Colton said. "Things weren't as complex as they are now to be in the music business ... and I knew I could do it, if I did the right things, I had the right songs and I had the right band."

Now 40, Colton admitted that he was naive, and he got caught up in the lifestyle.

"As things tend to happen in life, you just get you get your ass kicked a little bit," he said. "I think the best thing that could ever happen to me was to come back to Oklahoma City and re-establish roots. And I'm just kind of having this full-circle moment."

COVID-19 pandemic put music back in the forefront

Since he moved back in 2006, Colton has settled in OKC with his wife Betsy and their two children, Gray and Colette. He started Lunar Manor recording studio and was instrumental in organizing events like the Scissortail Park opening concert featuring Kings of Leon and Edmond's Heard on Hurd festivals. He has served on the boards of the Oklahoma Aids Care Fund, Allied Arts and Oklahoma Arts Council.

And he became operating partner with The Social Order Dining Collective, opening and operating the popular restaurant, bar and music venue The Jones Assembly.

"I was surrounded by incredibly talented people that I knew would have my back and helped me. But it felt like when I first went on tour, I was first making albums or first writing songs. ... You just don't know what you're doing, but you're like, 'OK, we're creating something magical,'" he said. "So, that made me kind of think, 'OK, well, this is the next phase. I think music is will always be a part of me. I'll still want to write songs and do that, but I think playing and performing is behind me.'"

Then, the COVID-19 outbreak forced The Jones Assembly to close for three months in spring 2020. During the shutdown, Colton recorded an unexpected album, "Inside Out," his first since 2014's "Lonely Ones."

Last summer's release of his first album in six years heralded his first concert in seven years, a kind of celebration of coming out of the pandemic. For the past four months, he said The Jones has hosted a diverse run of sold-out or near sold-out shows with enthusiastic crowds.

"And for me, I just don't think that album or this show would have happened without taking that breather, without COVID, without all those things. I'm going to have my kids there, and they've never even seen me play," said Colton, whose children are now 6 and 8 years old.

"They don't even know Dad as the guy on stage. They just know Dad is the guy who sort of has his silly songs that they hear occasionally on TV and in the 'Toy Story' movie."

For his debut on The Jones Assembly stage, he is planning a pre-show cookout, an after-party, surprise guest appearances and a set list that will include songs from each of his albums — and even a few tunes that date back to his high school days playing at local restaurants.

"In a way, I don't feel any different than when I was 20 years old writing songs that I didn't know if anybody would hear," he said. "Now, I'm so fortunate and so happy, especially coming out of this crazy time. I just think maybe this show will be the first of yet another chapter — whatever the hell that means."

COVID-19 protocols: Ticketholders must provide proof of full vaccination against COVID-19 or a negative test taken within 72 hours.