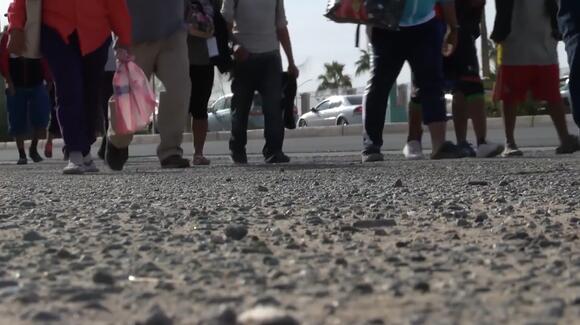 YUMA, Ariz. (KYMA, KECY) - The North American Leader's Summit comes as a group of thousands of migrants begins to make their way to the United States.

But there is still a concern as some are expected to end up at shelters and perhaps border patrol facilities - if they choose to come to Yuma.

According to Yuma mayor Doug Nicholls, the large migrant caravan leaving Mexico may not even make it to the county due to distance.

“Just in general that the generic movement from Central America to the northern border is used as a pretty far tracking pass up a lot of opportunities along the way. So that's generally why we don't get a large group that comes specifically from Central America,” the mayor explained.

However, Nicholls says there’s still the possibility some will.

News 11 spoke to shelters in San Luis Mexico and Mexicali that are concerned about the influx of migrants since they’re already at max capacity.

As for migrants being housed inside a local hotel, “That money is through their regular DHS budget so it's federal money it's federal taxpayer money that's being used for those contracts and it's $365 a day a person,” Nicholls said.

That daily amount pays for the hotel, food, and any minor medical expenses like a COVID test.

“So the cartels are using the asylum seekers to come to the human port as a bait and switch that allows the drug runners to come across the other sections of the desert,” Dunn said.

The state-deployed National Guard along the border right now is only limited to certain duties along the border. They aren't allowed to interact with undocumented immigrants due to federal regulations but can assist with illegal drug entry.

If any migrants were to cross, Dunn says the department of homeland security shuttles them out within 48 hours.

Currently, the Yuma Sector apprehends over 750 migrants a day with border patrol facilities at capacity.

The New River, which runs east of Calexico and into the Salton Sea, has been a public health hazard for decades. The post New River project in Calexico set to move forward appeared first on KYMA.
CALEXICO, CA・5 DAYS AGO
KYMA News 11

Yuma sees 9.5% increase in cost of living over past 10 years

It seems like everything has been getting pricier lately, and in Yuma, a new study confirms that wallets are becoming a bit lighter. The post Yuma sees 9.5% increase in cost of living over past 10 years appeared first on KYMA.
YUMA, AZ・11 DAYS AGO

High COVID-19 cases are being reported in both Yuma and Imperial counties Wednesday. The counties are both showing high positivity rates also. The post Yuma County’s COVID-19 positivity rate at its highest since beginning of 2021 appeared first on KYMA.
YUMA COUNTY, AZ・12 DAYS AGO
KYMA News 11

COVID-19 cases just continue to rise, and while it affects all industries of Yuma's economy, local restaurants have been among those affected the most. The post COVID-19 surge affecting local restaurants in Yuma appeared first on KYMA.
YUMA, AZ・12 DAYS AGO
KYMA News 11

Arizona governor lays out plans for last year in office

Gov. Doug Ducey (R-AZ) delivering his 2022 state of the state address Monday afternoon all part of opening day at the Arizona State Capitol. The post Arizona governor lays out plans for last year in office appeared first on KYMA.
PHOENIX, AZ・14 DAYS AGO

COVID-19 cases have surged almost three-fold in the military since just before Christmas. The post Military COVID cases have tripled since Christmas appeared first on KYMA.
MILITARY・14 DAYS AGO
KYMA News 11

A year ago the U.S. Capitol was invaded by many supporters of then President Donald Trump in an attempt to overturn the results of the 2020 election. Yuma locals, like Walter Ashenfelter, look back at the events, still frustrated with what happened. The post Yuma locals and visitors reflect on January 6th riots on first anniversary appeared first on KYMA.
YUMA, AZ・18 DAYS AGO
KYMA News 11

This past year has seen immigrants from all over make their way to the U.S. However for the Yuma sector of the border, they have seen an increase in numbers that far exceeds any others. The post Nearly 2,400% increase in Yuma activity comparing 2021 to 2020, says Border Patrol appeared first on KYMA.
YUMA, AZ・22 DAYS AGO
KYMA News 11

The Yuma City Council held its first public meeting of the new year. On the agenda, something that affects everyone walking in downtown Yuma. The post City of Yuma holds first council meeting of the New Year appeared first on KYMA.
YUMA, AZ・19 DAYS AGO
KYMA News 11

In the aftermath of the holiday season, many are trying to get tested for COVID due to being around someone who later tested positive or because they are feeling sick themselves. The post COVID testing challenges after holiday season appeared first on KYMA.
YUMA, AZ・20 DAYS AGO