End of the era for Matt Ryan and the Atlanta Falcons? 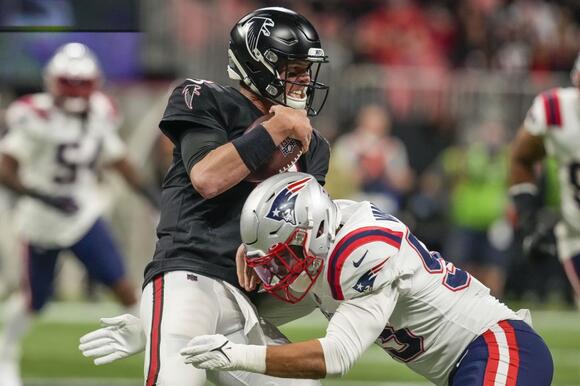 Fresh off a 43-3 beatdown at the hands of the Dallas Cowboys, Matt Ryan and the Atlanta Falcons hosted a red-hot New England Patriots squad Thursday night.

To say it didn’t go exceedingly well for Arthur Smith’s team would be an understatement. Atlanta fell down by the score of 13-0 at halftime with its offense putting up a total of 64 yards in those first two quarters.

When all was said and done, Atlanta lost by the score of 25-0 . Adding insult to injury, Ryan himself dealt with injuries to both his ankle and shoulder during the game and was eventually replaced by Josh Rosen under center with the game out of hand.

Reality now has to be setting in for Ryan as he finishes up his 14th season with the Falcons. They now sit at 4-6 and pretty much completely out of the NFC Playoff race . Could this be the end of Ryan’s tenure in Atlanta? Below, we look at why that makes the most sense.

Earlier in the season, Ryan talked to Sportsnaut’s “Mano A Mano” about his tenure in Atlanta. In the process, he had absolutely nothing but great things to say about the organization and the city.

“You know, from the top down, (owner) Arthur Blank has been unbelievable to me my entire career. I am thankful that I was drafted here,” Ryan told Sportsnaut . “I ended up in a building which is a great place to be a part of. It’s a great place to live. My family and I like it here. It’s the right place for us. I believe we have the right guys to win. And I want to do it here.”

This could very well be similar to Matthew Stafford’s departure from the Detroit Lions after 12 seasons. While Ryan has enjoyed much more success than his counterpart, there’s something to be said about a relationship having to come to an end.

Atlanta is closer to a full-scale rebuild than it is to contention for a playoff spot. At 36 years old, we’re not sure Ryan will even be playing once the Falcons return to relevance. It’s possible to move on from a situation while still holding your former city and bosses in high regard. If Tom Brady can do it, anyone can.

There’s also something to be said about a veteran of Ryan’s ilk enjoying playoff contention as he enters the twilight of his career.

It’s in this that there are multiple teams out there who are in a better position to contend with better quarterback play. We’re not 100% sure how the Baker Mayfield situation is going to play out in Cleveland. But the former No. 1 pick is having a down season en route to leading his Browns to a pedestrian 5-5 record. With a championship-caliber roster, adding an upgrade like Ryan under center could take this squad to the next level.

Remaining in the AFC, it’s hard to conclude that the Denver Broncos don’t boast an elite-level defense and one of the top receiving groups in the NFL. With Teddy Bridgewater under center, it’s primarily been about the quarterback position in the Mile High City. Ryan would change that.

Related: Find out where Matt Ryan stands in our NFL QB rankings

We can go up and down the line. The Philadelphia Eagles, Washington Football Team, Chicago Bears and San Francisco 49ers would all be seen as legit playoff teams with better quarterback play. Don’t think for a second this is lost on Matt Ryan.

Botton line: Ending the relationship on a high note

First-year Falcons head coach Arthur Smith might have success in Atlanta. Rookie tight end Kyle Pitts looks to be a generational talent at that position. These are the two core individuals the Falcons should start anew with a rebuild.

From there, it’s all about general manager Terry Fontenot finding that franchise quarterback to help rebuild the organization.

As for Ryan, he’d still be remembered as a lifelong Falcon. Once he does head to Canton, it will be all about showing love for the organization. In no way does that mean he should waste away during the twilight of his career.

been saying for the last four years that Matt Ruin needs to go. at this point, release and trade everyone but Art Blank and rebuild from the ground up.

Been a fan for most of my life..Atlanta has always stuck with a one player mentality the entire time. They also love to give too free agent money to running backs way past their time. Seems like Arthur is no better as ownership than the Smith family was..

Cordarrelle Patterson is a free agent, and Mike Davis might not be back. Here's a look at five running backs the Atlanta Falcons could target in free agency.
NFL・2 DAYS AGO

Two things can be true Antonio Brown is one of the greatest receivers to ever step on a football field and also one of the biggest team disrupters in football history. With the Atlanta Falcons desperate at the receiver position and in need of a playmaker Brown has to become at least a momentary consideration.
NFL・12 HOURS AGO
Sportsnaut

Can the Tampa Bay Buccaneers win back-to-back Super Bowls? Find out how the 2021 schedule sets up nicely for Tom Brady and Co. to make another title run.
NFL・4 HOURS AGO
Falcon Report

The Falcons must make a decision on their backup tight end.
NFL・6 HOURS AGO
Falcon Report

Watch all the highlights of Kyle Pitts’ historic rookie season with the Atlanta Falcons.
NFL・1 DAY AGO

'I would not be surprised at all to see WR Calvin Ridley dealt to the New England Patriots this offseason,' says NFL insider
NFL・7 HOURS AGO
Sportsnaut

NFL TV ratings, a look forward: The NFL Playoffs have arrived, following a 2021 regular season that saw interest in
NFL・2 HOURS AGO
atlantafalcons.com

The Falcons have had stability at the quarterback position most teams only dream about. They've had an upper-tier quarterback in Matt Ryan for 14 straight seasons, someone who is as stable and professional and as productive as it gets. That was the case again in 2021, where the Falcons increased...
NFL・2 DAYS AGO
Sportsnaut

Ben Roethlisberger’s NFL career came to a close on Sunday night with the Steelers’ 42-21 loss to the Chiefs. The Steelers started out the game strong (at least defensively) before giving up 21 points in the final six minutes of the second quarter. With how the Steelers offense...
NFL・2 DAYS AGO
Sportsnaut

Super Bowl 2022: The Tampa Bay Buccaneers are the reigning NFL champions, but who'll make the playoffs — and lift the Lombardi Trophy at the end of this season?
NFL・9 HOURS AGO
AllSteelers

PITTSBURGH -- Joe Hade might have played his final game with the Pittsburgh Steelers after spending the last five years in black and gold. The 32-year-old cornerback is expected to hit the free agent market with uncertainty whether or not the Steelers will make him another offer. Haden posted on...
NFL・2 DAYS AGO
USA TODAY

Following yet another late-season meltdown, Kyler Murray and the Arizona Cardinals are headed home for the winter. Losers of four
NFL・1 DAY AGO
Sportsnaut

Von Miller and Demaryius Thomas were teammates with the Denver Broncos for the better part of eight seasons. Thomas found
NFL・2 DAYS AGO
USA TODAY

Tom Brady could use a boost from the Tampa Bay Buccaneers defense that was so essential during the stretch run to winning the last Super Bowl.
NFL・2 DAYS AGO