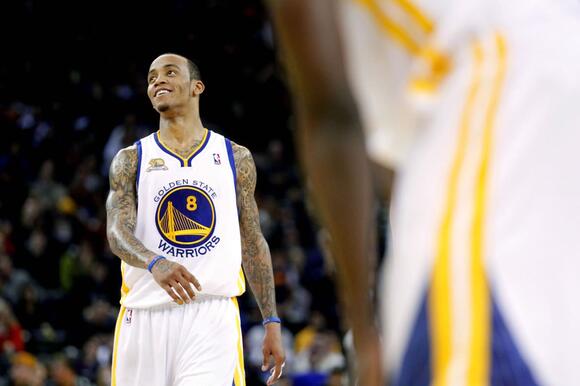 The Golden State Warriors are the best team in the NBA to start the season, and I think that they should bring back Monta Ellis who played with Steph Curry years ago.

The Golden State Warriors are on fire to start the 2021-22 NBA season, and have a 13-2 record in their first 15 games, which is the best record in the entire NBA.

After making the NBA Finals for five straight years, the Warriors have missed the playoffs in each of the last two seasons.

Based on the way they have started the new season it appears as if they will break out of their slump, and once again be considered one of the premier teams in the league.

I think that they should do something that would add to the exciting start to their season.

I believe that they should bring back NBA veteran Monta Ellis.

Why Should The Warriors Bring Back Monta Ellis?

Ellis has played for the Warriors, Bucks, Mavericks and Pacers over his 12-year career.

Clearly, there was some interest in Ellis to return to playing in the NBA.

He would only be signed for a veterans minimum deal, so money is not an issue for any team to sign him, and a team could probably even bring him without guaranteeing his salary for the entire year.

Therefore, the Warriors should bring him in.

There is no risk.

He was an absolute fan-favorite for years when he played for the Warriors from 2005 to the middle of the 2012 season.

As a 24-year-old he averaged 25.5 points per game, and after the Warriors drafted Steph Curry in 2009 he played in the backcourt with the now two-time MVP for several years.

Nothing would make for a better story then for Ellis to come back to the team he started his career with, and win an NBA Championship.

The Warriors have a very young team who does not have the experience that some of their other title teams had, and at the very worst Ellis would provide good veteran leadership as a respected former star and someone who has multiple years of playoff experience.

Stephen freaking Curry. What else is there to say? The Golden State Warriors star might be in the middle of a shooting slump this season, but that hasn’t stopped him from pulling out magic as he’s always done. In a close game against the Houston Rockets, Stephen Curry...
NBA・2 DAYS AGO
FastBreak on FanNation

The Golden State Warriors beat the Houston Rockets on a buzzer beater from Steph Curry, and after the game Curry spoke to the media.
NBA・1 DAY AGO
95.7 The Game

Warriors coach Steve Kerr took the blame for his team’s 121-117 overtime loss to the Indiana Pacers, who were without four of their top five scorers.
NBA・2 DAYS AGO
95.7 The Game

Warriors superstar Steph Curry hit a buzzer-beater to send Golden State to a 105-103 win against the Houston Rockets Friday night at Chase Center.
NBA・2 DAYS AGO

Steph Curry and the Warriors beat the Rockets on Friday night.
NBA・1 DAY AGO
FastBreak on FanNation

Steph Curry and the Golden State Warriors beat the Houston Rockets on Friday night, and Curry hit the first buzzer beater of his career.
NBA・1 DAY AGO
Paradise Post

Stephen Curry has hit all sorts of shots in his 13 seasons with the Warriors, but he unlocked a new one Friday night. Tied at 103 with 5.3 seconds left in regulation, Curry got the ball. He dribbled left, pulled up and elevated over a Houston defender. Forget the fact that he couldn’t seem to buy a basket on credit for most of the night. Forget the fact that he had dead legs from the prior night’s overtime loss.
NBA・1 DAY AGO
watchstadium.com

Steph Curry on the NBA’s Evolution

Steph Curry recently opened up about his role in the NBA with Shams Charania. The crew discusses his comments.
NBA・2 DAYS AGO

With the 2021-22 NBA season in full swing, basketball fans are putting on their jerseys and filling up arenas around
NBA・17 HOURS AGO
NBC Bay Area

Following a back and forth battle between the Golden State Warriors and Houston Rockets, Friday’s contest at Chase Center came down to the final shot. With only 5.1 seconds left on the clock, Golden State would get the final shot in regulation. With a chance to win the game, Steph Curry came to the rescue for the Warriors.
NBA・1 DAY AGO

Warriors week: If Steph Curry doesn’t win the MVP, who will?

In terms of story lines surrounding the Warriors this week, injuries, recovery and potential remain the main threads. Draymond Green’s injury will continue to be a major issue. Klay Thompson is slowly working his way back to his old self. We’re all holding our breath for the return of James Wiseman. And Jonathan Kuminga might be the most tantalizing Warrior rookie since Anthony Randolph.
NBA・1 DAY AGO
ClutchPoints

Klay Thompson hasn’t exactly been lighting it up for the Golden State Warriors since he made his highly-anticipated return to action in mid-January. Especially considering how Thompson was shooting the ball prior to his two-year injury hiatus, it would be safe to say that the five-time All-Star is currently in the midst of a brutal shooting slump.
NBA・2 DAYS AGO
FastBreak on FanNation

Steve Kerr spoke to the media after the Golden State Warriors beat the Utah Jazz.
NBA・5 HOURS AGO
CBS Sports

MILWAUKEE -- The regional rivalry between the Milwaukee Bucks and Chicago Bulls was renewed on Friday night, when the two Eastern Conference contenders met for the first time this season. With a split crowd reacting to every play, the game didn't need need any more juice, but it got some in the third quarter when Grayson Allen was ejected for a dangerous foul on Alex Caruso.
NBA・2 DAYS AGO
FastBreak on FanNation

Giannis Antetokounmpo and the Milwaukee Bucks defeated the Chicago Bulls on Friday evening.
NBA・1 DAY AGO
FastBreak on FanNation

Luka Doncic has many of the same flaws as Russell Westbrook but gets far less criticism. He may not be able to outrun it much longer.
NBA・2 DAYS AGO
Footwear News

Images of the Air Jordan 12 ‘Playoffs’ Have Surfaced

An iconic Air Jordan 12 style is returning to sneaker stores soon. Sneaker leak social media account @zSneakerheadz shared images of Michael Jordan’s 12th signature basketball shoe in the original “Playoffs” colorway, a style that debuted in 1997. Jordan Brand confirmed in December that the Air Jordan 12 “Playoffs” will be returning in February as part of the brand’s spring 2022 Air Jordan retro collection to celebrate the shoe’s 25th anniversary. The sneaker will release in conjunction with this year’s NBA All-Star Game in Cleveland, OH, which was the same location and event where the NBA legend first laced up the style...
NBA・2 DAYS AGO