Someone You Should Know: Kids’ pastor channels his sense of humor to spread the word of God and express his love of Chick-Fil-A 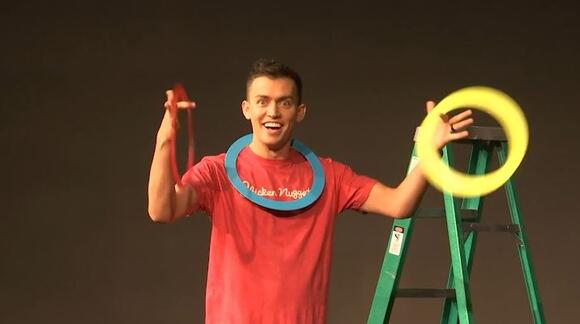 “Chick-Fil-A, The Office, and La Croix; they’re just like, passions of mine,” Kyle Jorris said.

Aside from those passions, he’s the kids’ pastor at Evangel church in Bismarck and it’s that passion that brought him to the Peace Garden State from Fort Wayne, Indiana.

Back home, he grew up with both of his parents as pastors.

“They’ve been there for as long as I’ve been alive, serving kids and families in their community,” said Jorris. “Now I’m here in Bismarck 1,000 miles away doing the same thing. It feels really good.”

Evangel is his first pastoral position but Jorris had worked with kids for a long time.

Plus, he traveled the country in recent years as an Evangelist.

He was doing a lot of what he does today; preaching the word but by way of unicycling, juggling, and tricks that are perfect for kids.

It was on the road when he realized he wanted to reach more people. He said, “I wish I could make videos and all different kinds of content for kids and families to watch together to grow closer in a relationship with them and ultimately with God, so that’s what happened.”

His YouTube channel consists of a rap album of bible verses, silly bible-based songs, vlogs, and a special video relating back to one of those first passions he mentioned.

Of all the content on the Internet, he hopes kids find their way to his.

Ultimately, Jorris’ motto comes down to his favorite Bible verse; “I want to let my light shine, before others that they may see my good deeds but understand that I’m only good because of my savior.”

He says it’s a reminder to be good not for oneself, but for others.

While his online content can reach all over… locally, he reaches about 500 kids a week at Evangel.

“I know a lot of their names and I love being able to high-five them, and know where they’re at in life and in their faith and in their families,” said Jorris. “I think it’s just so much fun. And I also get to juggle and play, and ride unicycles and do crazy magic tricks on stage for them every week, so that’s fun too.”

And while he says it’s God that led him to his ministry work, he jokes that God also wouldn’t have led him to a place that didn’t have Chick-Fil-A. Low and behold, it’s being built just in the knick of time.

“I’m hoping Chick-Fil-A succeeds for the rest of my life here in Bismarck so I can have chicken nuggets as much as I want, ’til the day I die.”

Still, that’s not the only thing keeping Kyle Jorris in the capital city.

“The families, the people, and my friends that I’ve made here are just so valuable to me. All those friendships and relationships that I have, make it meaningful to stay here. But ultimately, God called me to be here, I wouldn’t be here without him.”

Kyle Jorris… pastor … husband … lover of Chick-Fil-A … and Someone You Should Know.

It’s worth note – that the hilarious ode to Chick-Fil-A on Kyle’s YouTube – is a big thanks to his wife, who encouraged him to make content beyond the usual.

Thank you to her for a good laugh about the long-awaited restaurant coming to North Dakota.

Toddlers and preschoolers inside the North Dakota Heritage Center & State Museum are learning about how snow falls on the ground in some creative ways. During the Little Kids Big World exercise, the story If Snowflakes Tasted Like Fruit Cake was read to children. With the help of their parents, children engaged in an arts […]
KIDS・4 DAYS AGO
KX News

A non-profit is launching a new partnership, helping it expand its reach by miles — literally. Souris Valley United Way in Minot has announced the Ride United Last Mile Delivery program. United Way Worldwide teamed up with DoorDash a year ago to offer delivery service of essential items to those with transportation challenges. Now, Minot […]
MINOT, ND・23 HOURS AGO
KX News

Betty White would have turned 100 years old on Monday, and for her birthday, people are challenged to donate in her honor. The Betty White Challenge encourages people to donate $5 to their local animal shelter or rescue. For Belle’s Sake, a local animal nonprofit and rescue, celebrated by holding a meet and greet with […]
PETS・2 DAYS AGO
KX News

America is a country where people come to live freely but some countries aren’t afforded the same opportunities. Cameroon is a country in central west Africa bordering Nigeria. And getting the proper medical care has become harder to get. Calvin Hohn who is currently in Cameroon with the Cameroon Baptist Convention has gotten to experience […]
BISMARCK, ND・1 DAY AGO

Sanford Health has added a new doctor to its children’s campus in Bismarck, and she’s the region’s first pediatric cardiologist. Dr. Michele Pasierb joined Sanford in Fargo two years ago. If a child in the Western part of the state needed a cardiologist, the parents must travel to Fargo. Now, they only need to go […]
FARGO, ND・2 DAYS AGO
KX News

Bismarck Public Schools is using new technology when it comes to communication between parents and school staff who speak different languages. Interactive Language Assistant is a system that breaks the language barrier between parents and school staff through a tablet device. The app works by first selecting a language and speaking a thought. The app […]
BISMARCK, ND・21 HOURS AGO
KX News

Since 1994, the Gateway to Science program has brought creativity to schools and communities across the state.The program hosts an afterschool STEM club, and each week members are able to participate in hands-on activities that include a science lesson. Working in the programming department, teaching curriculum, camps and clubs, Thomas Power says he loves helping […]
BISMARCK, ND・1 DAY AGO
KX News

Volunteers presented their findings after a years-worth of research on what’s called Champion Trees. Champion Trees are identified as the largest tree specimens found in the U.S. and there are even some in Bismarck. Some of those trees are Cottonwoods, American Elms, and Bur Oaks. The results of the research were shared Sunday during a […]
BISMARCK, ND・3 DAYS AGO

The spring turkey season is all set in North Dakota with 7,647 wild turkey licenses available, and according to Game and Fish, that’s 635 more than last year. Something new this year, handguns are no longer a legal firearm — only shotguns no larger than a 10 gauge are legal. Unit 21, in Hettinger and […]
LIFESTYLE・22 HOURS AGO
KX News

Producers shared ideas Wednesday at the 54th Annual North Dakota Dairy Convention in Bismarck. About 30 million gallons of milk are produced at dairy farms across North Dakota, along with cottage cheese, yogurt and other products. To break it down even further, there are just about 60 dairy farms in the state contributing to producing […]
BISMARCK, ND・21 HOURS AGO
KX News

Fourteen-year-old student driver Madison Foster is not just staying safe by buckling up and following all posted speed limit signs. She’s taking driver’s education lessons to prepare for the wintry weather road conditions. “As soon as my sister got her permit, I was pretty jealous and wanted to drive by myself,” Foster said. Last February, […]
TRAFFIC・2 DAYS AGO
KX News

Martin Luther King Jr. Day is a federal holiday acknowledging the legacy of the great civil rights leader. His goal was to bring together people from all walks of life, ensuring the best community for all. And Monday night, a Bismarck church is hosting an event to honor his efforts. The first time MLK Day […]
BISMARCK, ND・2 DAYS AGO

Just like any other day, Laurie Kunz pulled into work and said nothing will stand in her way to interrupt her from what she describes as a one-of-a-kind job. “I love my job here, best job I’ve ever had. I’m so thankful for the family and friends I do have here,” said Kunz, a teacher’s […]
LINCOLN, ND・5 DAYS AGO
KX News

“Beef to me and my family means quite a bit because our farm has kinda stayed in the family, especially my grandpa’s farm. It’s nice to know that the beef comes locally and that we support local farmers, especially times like now when the beef market is kind of low,” said Ashley Schmaltz. Despite a […]
AGRICULTURE・20 HOURS AGO
KX News

Starting Thursday, the North Dakota Tournament Association’s Dart Tournament gets underway in Dickinson. To tell us all about it, Preston Obrigewitsch, owner of Badlands Music, joined us for our Jan. 19 edition of KX Conversation. We discussed how busy he and his team are setting up for everything, how many players they expect, the economic impact an […]
DICKINSON, ND・21 HOURS AGO
KX News

Police are asking for volunteers to assist in a search for Katelynn Berry, a Montana woman who’s been missing since Dec. 21, 2021. The Richland County Sheriff’s Office and Sidney Police Department are asking for all volunteers who can assist in the search for Berry to report to the Richland County Fire Station on Thursday […]
SIDNEY, MT・2 DAYS AGO
KX News

Army veteran Delaino Helm once visited Washington D.C. on an honor flight. “It was exciting, especially when we got to Washington to the airport. We walked down there to the terminal, and everybody was greeting us,” Helm said. He said other veterans should take the same opportunity. “I encourage them to go if they didn’t,” […]
WASHINGTON, DC・3 DAYS AGO
KX News

Bottineau Winter Park opened in early December and with all the snow North Dakota’s getting this winter, attendance has been rising. “We love all the fresh snow that we got,” said Rachael Buss, program coordinator for Annie’s House Adaptive Recreation Program. “That’s been a really, really great benefit for the park. We’re starting to pick […]
BOTTINEAU, ND・2 DAYS AGO
KX News

Know the symptoms of COVID vs. cold and flu… and when to get tested

There are constantly new developments in the fight against the Coronavirus. CDC guidelines are often changing, but one thing that hasn’t – the message to get vaccinated. There are many different covid variants, but the CDC lists Delta and Omicron as variants of concern because of how quickly they spread. The omicron variant spreads more […]
PUBLIC HEALTH・1 DAY AGO