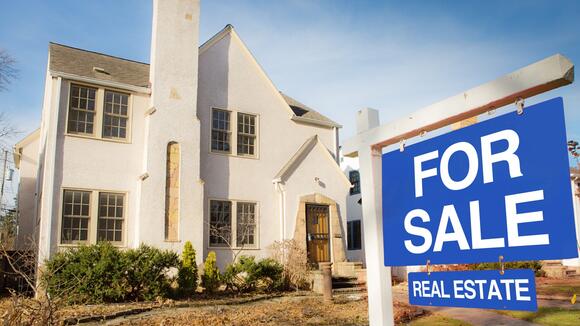 Home prices rose by nearly 20% over the last year, an astonishing rate of growth that was faster and more intense than even the run-up to the housing crash of 2008, according to Fortune — and that one sunk the entire global economy. Volumes have been written about the lumber shortage, the remote-work office exodus and the record-low mortgage rates that turned the 2021 housing market into one giant bidding war, but will it finally all come crashing down in 2022?

If the pessimist inside you wants to believe that 2022 will bring an implosion to rival anything the Great Recession doled out, you won’t have to look far to find a doom-and-gloom housing market analysis that confirms your worst suspicions. The reality, however, will probably be much less dramatic.

Check Out: Surprising Data Reveals The Top 25 Tax-Friendly States To Retire
See: 26 Home Makeover Ideas That Each Cost Less Than $500

Current Growth Is Not Sustainable, But a Crash Is Unlikely

Fannie Mae predicts that home prices will rise by just 7.9% between the fourth quarter of 2021 and the same time at the end of 2022 — “just” being a subjective term. Although annual growth of nearly 8% might seem trivial in light of 2021’s historic gains, 7.9% is nearly double the average historical growth rate. Since 1987, according to the Federal Reserve Bank of St. Louis, home prices have grown by an average of 4.1% per year. In short, the many buyers who were priced out of the market in 2021 should temper their expectations if they were hoping that the bubble would pop and turn the tables in favor of buyers this year. The more likely scenario is that the market will cool, but only to a point that’s less scorching hot but still historically impressive in terms of price appreciation. Although prices won’t fall, they will almost certainly increase by less — much less — than they did during the market’s historic 2021 run.

Avoid These: Craziest Things That Kill Your Home’s Value

Forces Are in Play To Ease Prices Down Gently

Two conflicting storylines are teaming up to make a sudden crash unlikely in 2022. The first is rising mortgage rates. COVID-19 brought historically low-interest rates that made it cheaper to borrow money than it had ever been before. Buyers across the country knew that such a chance would likely never come again and raced to lock in loans. Those record-low rates, however, have already started inching up and continue to climb. Fannie Mae predicts the average 30-year fixed mortgage rate will jump to 3.3% this year. With the cheap-money incentive drying up, demand — and therefore prices — should plummet, bringing to fruition the crash that so many fire-and-brimstone pundits have predicted for 2022. But there’s another dynamic at play that is mitigating the price-smothering effect of rising interest rates: Even if rates continue to rise, there’s simply not enough supply for demand to crash. Fannie Mae’s 2022 outlook noted a “severe shortage of homes for sale,” which are “limiting interest rate effects on home sales and home prices of housing inventory.” Not only is supply so tight that prices will still appreciate even with a drop in demand, but historically speaking, 3.3% mortgage rates are still very low and quite enticing. The ingredients for a sudden housing market crash are not in place, but it does appear that conditions are ripe for demand and prices to ease down gently throughout next year.

Read: Homes Won’t Be Affordable in These Cities Within 10 Years

Buyers who are waiting for prices to plummet in 2022 will likely be disappointed. While competition will probably be less stiff and rising home prices will begin to even out, many buyers will get a wash. They’ll trade slightly lower housing prices for slightly higher mortgage rates — i.e., they’ll pay less up front but more over time than they would have had they closed in 2021. Most sellers will probably face a similar tradeoff. Yes, prices and demand are higher now than they’re predicted to be this time next year, which is good for sellers. But those who rush to sell now while the market is still hot will find themselves on the other side of the equation — they’ll become buyers struggling to overcome those same difficult conditions as they look for their own new houses to live in. With a dramatic crash highly unlikely for the housing market in 2022, buyers and sellers alike would be wise to follow the wisdom that holds true during the hottest seller’s markets, the coolest buyer’s markets, and everything in between. Make your move when you’re ready —  financially, personally, and in terms of your moving schedule — instead of trying to time the market.

This article originally appeared on GOBankingRates.com : Will the Housing Market Finally Crash in 2022?

The monopoly man never won from home prices dropping.I think prices will continue to rise even if it leaves everyone homeless.My bets are the government keeps inflating this balloon.

Overpopulation will continue to make prices rise in desirable areas, in both sales and rentals.When demand is high prices rise.

It will fall, another note to home owners there is always a risk that you could lose all your equity and home due to something similiar to credit card fraud but easier. Not many are aware but like many things when you think your home is yours it is not. Good example if someone wants it they can take it as well if the govwrnment wants it, it's theirs.

Priced Out of the Housing Market? Consider These 5 Living Situations

Do you worry you're being priced out of the current housing market? As discussions of an impending recession increase and more companies conduct mass layoffs, renters may struggle to find not just...
2 DAYS AGO
GOBankingRates

Home Prices: 8 Cities To Consider Where Costs Could Drop Quickest

As housing prices begin to fall after a period of real estate mayhem (during which home prices rose by as much as 20.6% year-over-year in March 2022), Goldman Sachs recently projected a significant...
AUSTIN, TX・6 HOURS AGO
GOBankingRates

Will Your Home Lose Value in a Recession?

The big 'R' word: We've been hearing it tossed about through gritted teeth for months now. As the Federal Reserve has steadily hiked interest rates in its efforts to curb inflation, the unfortunate...
FLORIDA STATE・3 HOURS AGO
GOBankingRates

Don’t Hide Your Emergency Cash in These Spots

To keep from having to go into debt when the unexpected happens, financial experts recommend that you open a savings account and build an emergency fund that can cover three to six months' worth of...
4 DAYS AGO
GOBankingRates

Dollar Tree Is Raising Prices: What You Need To Know

Dollar Tree changed its standard price point from $1 to $1.25 in 2022, and there are more changes coming. The Fortune 500 company has also been working on Dollar Tree Plus, a new initiative for...
5 HOURS AGO
GOBankingRates

On Jan. 19, the U.S. officially hit its debt ceiling, having spent all of the $31.4 trillion available for expenditures as allocated by the Treasury. In the days since, conversations have become...
2 DAYS AGO
GOBankingRates

Claim Your Money From All These Class Action Settlements Worth Millions

Consumers and the government alike are cracking down on companies that have engaged in negligent or harmful policies -- whether it's purposefully slowing down data while keeping rates high (in the...
ILLINOIS STATE・2 DAYS AGO
GOBankingRates

It's no surprise that the housing market has been a difficult one recently, as inflation, soaring rates and short supply made for a bad combination for potential homebuyers. What may come as a...
COLORADO STATE・2 DAYS AGO
GOBankingRates

Does the IRS Still Owe You Money From Your 2020 Tax Return? How To Find Out and Claim It

Tax season for 2022 returns has officially begun as of this week, but 2020 returns are also in the news again. The IRS recently let Americans know they some may still be owed money from that time...
2 DAYS AGO
GOBankingRates

It can be tough to leave Costco -- which feels like a universe unto itself -- without a shopping cart overflowing with stuff, but experts note there are some items at the mega warehouse club that just...
3 DAYS AGO
GOBankingRates

Debt Ceiling: 6 Million Jobs, 7% Unemployment Rate Are on the Line If Government Defaults

On January 19, the U.S. government reached its debt ceiling limit of $31.4 trillion, provoking U.S. Treasury Secretary Janet Yellen to tell Congress "extraordinary measures" would start to roll out in...
3 DAYS AGO
GOBankingRates

The East Coast is often seen as an affluent part of the country, even though it includes a number of states spanning New England to the South with varying economies. The entire U.S. has experienced...
GEORGIA STATE・1 DAY AGO
GOBankingRates

Warehouse stores offer discounts on bulk goods, as most know. Membership benefits usually include access to member-only pricing at the store's gas stations, savings on bulk items in-store and online,...
1 DAY AGO
GOBankingRates

While most people think of social security as a retirement income program, it is actually much more. Social Security provides several other services including survivor's benefits, disability benefits...
3 DAYS AGO
GOBankingRates

Make Groceries Last and Save Money With 6 Essential Preservation Tips

With grocery prices soaring, making food stretch is crucial. But for many, that's hard to accomplish simply because they don't know where to start. Consider taking tips from someone who doesn't have a...
3 DAYS AGO
GOBankingRates

Real estate is typically thought of as a good investment, as home values tend to increase over time. While this upward trajectory is not guaranteed, there are a number of factors -- both within and...
4 DAYS AGO
GOBankingRates

The Future of Banking: When Will We No Longer Need Cash?

In 1950, Americans could pay for dinner at a restaurant even if they left their money at home for the first time in history. That was the year Diners Club introduced the world's first credit card. See...
CALIFORNIA STATE・3 DAYS AGO
GOBankingRates

Overhaul Your Finances With This 7-Day Financial Detox

There's no shortage of detox diet trends that are supposed to improve your health -- from eliminating sugar to eating only plants or even drinking only water (and eating nothing) for a few...
4 DAYS AGO
GOBankingRates

Are Banks the Best Places To Exchange Currency?

When it comes to exchanging currency, banks are generally cited as one of the best places to do so. But is it the very best option, or could you go somewhere else just as easily to swap money? See the...
2 DAYS AGO
GOBankingRates

About one in 10 Americans suffer from food insecurity, meaning they have trouble getting enough nutritious food to eat. That percentage briefly spiked higher during the COVID-19 pandemic, but it has...
1 DAY AGO