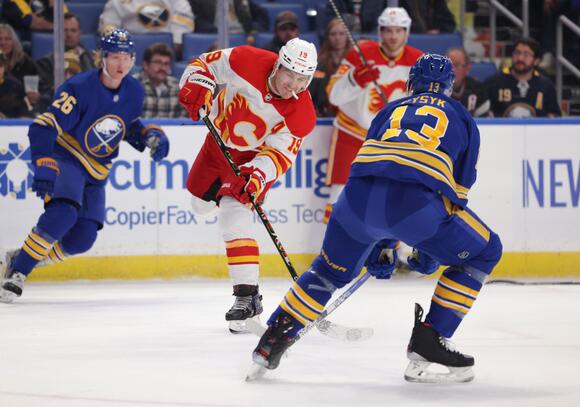 The Calgary Flames used four second period goals to stun the Buffalo Sabres and shut them out 5-0 on Thursday night at KeyBank Center.

Johnny Gaudreau broke the stalemate midway through the opening period with his fifth goal of the season. The forward was able to get behind the Sabres defense and receive a pass from Matthew Tkachuk before scoring. Tkachuk and Christopher Tanev assisted on the goal that made it 1-0 Flames.

It did not take Calgary long in the second period to extend their lead to 2-0 over the Sabres. Andrew Mangiapane scored his 11th goal of the season, despite Tokarski tipping the puck with his glove. Mangiapane was able to use pass from Tanev in the offensive zone to create the chance. Oliver Kylington and Tanev were credited with the assists.

The lead was extended to 3-0 on Tkachuk's eighth goal of the season, after being set up Gaudreau on a cross-ice pass. Both players recorded their second points of the night with a goal and assist. Elias Lindholm recorded his first point of the night on the goal.

A pair of quick goals late in the middle stanza helped Calgary balloon their lead to 5-0 over Buffalo. Mangiapane and Gaudreau each scored their second goals of the game, coming just over 30 seconds apart. Gaudreau's second goal of the came while Anders Bjork was in the penalty box for high sticking.

Neither team was able to score in the third period. Aaron Dell came in relief for the Sabres in goal and made 10 saves after Tokarski played the first two periods.

Third Period
BUF : none
CGY : none

First Period
BUF : none
CGY : none

Third Period
BUF : none
CGY : none

What's Next
The blue and gold will be in New York to face the Rangers on Sunday evening. Buffalo and New York will drop the puck at six o'clock at Madison Square Garden on The Bet 1520 AM. Pregame coverage with Brian Koziol will begin at five p.m. as well.

The Buffalo Sabres were no match for the Detroit Red Wings on Saturday night, as the Wings defended their home ice to the tune of a 4-0 shutout final.
NHL・23 HOURS AGO
NHL

The Detroit Red Wings bounced back in a big way on Saturday night, scoring a pair of power-play goals and receiving 22 saves from goalie Alex Nedeljkovic in a 4-0 shutout win over the Buffalo Sabres at Little Caesars Arena. Tyler Bertuzzi scored on the power play at the 8:57...
NHL・23 HOURS AGO
WGR550

The Buffalo Sabres got some good news on Saturday morning as Tage Thompson will be returning from the NHL’s COVID-19 protocols. He’ll go into the lineup for Zemgus Girgensons, who is injured and didn’t practice on Friday. Paul Hamilton has more:
NHL・1 DAY AGO

This was a total team win just like the loss to the Lightning was due to a lack of effort. This win was a very good recovery as the team came to play with a full effort. Buffalo stayed aggressive and never backed off to give Nashville hope.
NHL・2 DAYS AGO
WGR550

Sabres get Peyton Krebs back from NHL's COVID-19 protocols

Peyton Krebs returned to practice for the Buffalo Sabres on Sunday after exiting the NHL’s COVID-19 protocols. He will play on Monday against the Detroit Red Wings. Paul Hamilton has more:
NHL・6 HOURS AGO
USA TODAY

Brad Marchand and Sidney Crosby are notable snubs for the 2022 NHL All-Star Game, which will be held in February in Las Vegas.
NHL・2 DAYS AGO
NHL

3 Takeaways: Islanders Shut Out by Capitals 2-0

Semyon Varlamov stops 34-of-35, but Islanders unable to capitalize vs Washington. The New York Islanders three-game winning streak came to a close on Saturday, as the Isles fell 2-0 to the Washington Capitals at UBS Arena. Tom Wilson's goal at 4:35 of the first period held up as the game-winner,...
NHL・1 DAY AGO

Rangers’ Shesterkin shuts out Sharks 3-0 in return to lineup

SAN JOSE, Calif. (AP) — Igor Shesterkin made 37 saves in his return from COVID-19 protocol, Braden Schneider scored in his NHL debut and the New York Rangers beat the San Jose Sharks 3-0. Chris Kreider got his first career short-handed goal and an empty-netter to reach 200 career goals as the Rangers followed up a 1-0 victory over the Sharks at Madison Square Garden on Dec. 3 with another shutout less than six weeks later. Adin Hill made 27 saves for the Sharks. San Jose has lost seven straight against the Rangers.
NHL・2 DAYS AGO
97.1 The Ticket

Individually, Larkin has had a great season. His resurgence has been crucial for the Red Wings, who look to have a No. 1 center moving forward.
NHL・2 DAYS AGO
Sportsnaut

Chicago Blackhawks defenseman Calvin de Haan was fined $2,500 by the NHL on Friday for a dangerous trip against Montreal
NHL・2 DAYS AGO
KOAA News 5 Southern Colorado

Nathan MacKinnon and Cale Makar have been selected to play in the 2022 NHL All-Star Game for the Central Division team, which will be coached by Avalanche coach Jared Bednar.
NHL・2 DAYS AGO

Aisha Visram is believed to have become the first woman to work on the bench of an NHL regular-season game in any capacity when she served as athletic trainer for the Los Angeles Kings in their 6-2 win over the Pittsburgh Penguins on Thursday night.According to the Professional Hockey Athletic Trainers Society and Society of Professional Hockey Equipment Managers, Visram likely made history when she stepped in because three Kings support staffers were unavailable because of COVID-19 protocols.“That’s incredible. That’s great. We need more of that in our game,” Kings coach Todd McLellan said.Visram is the head trainer for...
NHL・2 DAYS AGO
thednvr.com

Kuemper shuts out Coyotes in return to Arizona

In my opinion, what made the game-changing Too Many Men call earlier this week in Nashville extra disappointing was that the Colorado Avalanche went into that game with a chance to claim the top spot in the Central Division had they won. They let that opportunity slip away but had another chance this weekend to climb to the top of…
NHL・19 HOURS AGO
NHL

The Detroit Red Wings dropped a 3-0 decision to the Winnipeg Jets on Thursday night at Little Caesars Arena. The Jets scored one goal in all three periods to complete the game's scoring, securing their third win in the past four games dating back to Jan. 2. Detroit was shut out for the fifth time this season, and the second time in the past four games.
NHL・2 DAYS AGO
CBS Boston

BOSTON (CBS) — Tuukka Rask now has 540 starts in net for the Boston Bruins. His most recent one was a lot different than the others, the goaltender admitted Thursday night. Rask said that it was an emotional experience as he made his long-awaited return for the Bruins on Thursday night, his first game in net for Boston in 218 days. The 34-year-old showed very little rust in his first game back from offseason hip surgery, stopping 25 of the 27 shots that the Philadelphia Flyers sent his way and helping Boston notch a 3-2 victory at TD Garden. Simply put, Tuukka...
NHL・2 DAYS AGO
WGN Radio

Islanders' Adam Pelech is an All-Star, but Mat Barzal could join him in Vegas

Islanders defenseman Adam Pelech is officially an NHL All-Star, but his teammate Mat Barzal also has a chance to be voted in to join the league’s best.
NHL・2 DAYS AGO
Sportsnaut