Duchess Kate switches up her hairstyle for a night out 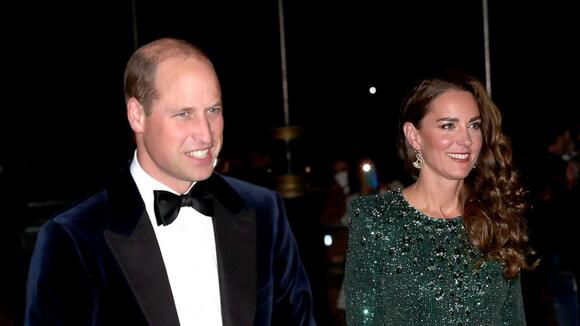 Duchess Kate switched up her hairstyle, opting for curls instead of her usual straight locks, for a night out with Prince William on Thursday.

The Duchess of Cambridge revealed the new look at the annual Royal Variety Performance, a theater event that supports one of the queen's patronages, the Royal Variety Charity. The organization is dedicated to supporting entertainers who find themselves in need.

For the occasion, Kate, 39, wore a gown by Jenny Packham, according to People . This isn't the first time royal-watchers have seen her in the dress; she also wore it during her tour of Pakistan in 2019.

In September, the couple visited Royal Albert Hall for another glamorous event: the premiere of "No Time To Die."

Happy for this beautiful, Royal couple. Hopefully, restores both elegance and family values to the monarchy. Long live the Queen!

Prince William Heartbreak: Kate Middleton’s Future Royal Title Will Be Bittersweet For Her Husband? Duchess To Be Called Princess Of Wales

Kate Middleton's future royal title will reportedly remind Prince William of Princess Diana. Prince William lost his late mother, Princess Diana when he was just a teenager. Even though it’s been years since the Princess of Wales died, it’s possible that the Duke of Cambridge has never gotten over the loss.
CELEBRITIES・4 DAYS AGO
Entertainment Times

Prince Harry and Meghan Markle Had a ‘Private’ Moment With Duchess Kate to Celebrate Her 40th Birthday, Expert Claims

Celebrations from abroad. Prince Harry and Meghan Markle made sure to send their regards to sister-in-law Duchess Kate on her 40th birthday earlier this month. “They did a video call,” royal expert Christopher Andersen exclusively told Us Weekly on Tuesday, January 11. “They wished her a happy birthday. [It was] very private.”
WORLD・13 DAYS AGO
epicstream.com

Kate Middleton and Prince William have reportedly been fighting over cheating allegations again. Prince William has been hounded with cheating rumors for quite some time now. Reports about the Duke of Cambridge cheated on Kate Middleton with Rose Hanbury, a married pal of the Duchess of Cambridge and part of their social circle, has been around for a while.
WORLD・8 DAYS AGO

Duchess Kate and Prince William paired up for a second day of royal engagements this week by visiting health care workers in the northwest of England. The couple arranged to carry out two appointments in Lancashire on January 20 to speak with frontline staffers who have experienced unique challenges faced by rural health providers during the coronavirus pandemic.
CELEBRITIES・5 DAYS AGO
Life and Style Weekly

Prince William Shuts Down Having Baby No. 4 With Duchess Kate: ‘Don’t Give My Wife Any Ideas’

Three is the magic number! Prince William shut down any “ideas” about having baby No. 4 with wife Kate Middleton. The royal couple paid a visit to the Clitheroe Community Hospital in England on Thursday, January 20. While greeting members of the community, new parents Trudi and Alastair allowed Kate, 40, to hold their baby girl, Anastasia.
WORLD・4 DAYS AGO
epicstream.com

Kate Middleton Diet: How Duchess Of Cambridge Keeps Slim Figure, What Does She Eat?

Kate Middleton works hard to be in shape by staying on the top of her diet. Kate Middleton has maintained her slim figure even after giving birth to three adorable children — Prince George, 8, Princess Charlotte, 6, and Prince Louis, 3. The Duchess of Cambridge was able to do so by minding the food she consumed.
CELEBRITIES・6 DAYS AGO
SheKnows

If you purchase an independently reviewed product or service through a link on our website, SheKnows may receive an affiliate commission. Kate Middleton kicked off 2022 by putting her best (fashion) foot forward. The Duchess of Cambridge attended her first public engagement along with her husband, Prince William, following the holidays and her milestone 40th birthday. As the Cambridges pulled up to the site of their visit, Kate’s look totally caught our eye. Obviously, this is nothing new for Kate, who always seems to perfectly accessorize every outfit she fashions with a classic silhouette and contemporary edge. So, without further ado, let’s dive into the Duchess of Cambridge’s first look of 2022.
BEAUTY & FASHION・6 DAYS AGO

The Duchess Of Cambridge Is Making Wide-Legged Trousers Her Signature

The Duchess of Cambridge braved the cold London weather in an ensemble that is fast becoming her signature uniform, and one which also very much resonates with how her sister-in-law, the Duchess of Sussex, dresses for official appearances. Kate was photographed arriving at the Foundling Museum yesterday, wearing a pair...
BEAUTY & FASHION・5 DAYS AGO
Vogue

January blues don’t seem to exist in the Cambridge household, and why should they? After the roaring success of Kate’s 40th birthday portraits, which showed a new style direction for the royal, the Duchess is back to work with a smile that suggests she had a lovely birthday, thank you very much.
WORLD・6 DAYS AGO
prima.co.uk

The Duchess of Cambridge returns to work after her birthday

The Duchess of Cambridge stepped out for her first public engagement of the year, alongside Prince William, as they visited the Foundling Museum in London. Keeping the minus one temperature at bay, Kate looked as chic as always, wrapped up in a black high-necked top, navy fitted flares and a long petrol blue blazer – which she paired with gold hoop earrings from high street brand Accessorize, which have already sold out!
CELEBRITIES・5 DAYS AGO
prima.co.uk

Kate Middleton stepped out in style on Thursday (20 January) when she and Prince William visited Clitheroe Community Hospital. The royal was reduced to giggles after cuddling up with a therapy dog during her visit to the healthcare facility. The Duchess and Duke of Cambridge attended a series of engagements...
CELEBRITIES・4 DAYS AGO

Princess Diana and Kate Middleton have both drawn inspiration from the epaulettes and double-breasted blazers of military-style fashion.
BEAUTY & FASHION・13 HOURS AGO
Parade

Duchess Kate stepped out for a museum visit with Prince William yesterday—and eagle-eyed royal watchers will have noticed that she’s taking notes from her sister-in-law!. The Duchess of Cambridge wore a gorgeous teal coat that is very similar to one that Meghan Markle wore to the launch of Together: Our Community Cookbook back in 2018.
CELEBRITIES・5 DAYS AGO
Cosmopolitan

Kate Middleton may be royalty but that doesn’t mean she’s not down to earth in the fashion stakes. The Duchess of Cambridge stepped out today (19th January) wearing £2.10 Accessorize earrings (yes, really) and £130 trousers from Jigsaw too. Joining Prince William to learn more about...
BEAUTY & FASHION・6 DAYS AGO
epicstream.com

New research revealed that Meghan Markle and Prince Harry are more photogenic than the Cambridges. Royal fans have been pitting Meghan Markle and Kate Middleton against each other for years even though there’s really no competition between the sisters-in-law. Just recently, Meghan Markle and Middleton were once again compared...
CELEBRITIES・4 DAYS AGO
Hello Magazine

There's not a one size fits all approach when it comes to royal living rooms. Some include decadent gold details and huge works of art whereas others are more modern with muted colour schemes. Discover where the likes of the Queen, Meghan Markle, Kate Middleton and Zara Tindall all choose to relax. Keep scrolling to see the most amazing royal living rooms…
INTERIOR DESIGN・19 HOURS AGO
purewow.com

The Duchess of Cambridge is kicking off her first event of the year by changing up her hair﻿. While heading to the Foundling Museum with Prince William for their first public engagement of the year, Kate Middleton was spotted rocking a dark navy outfit with a light blue trench coat (below, right). But what really caught our eye was her bouncy blowout with curls—a big change from the laid-back waves in her birthday portraits (below, left).
CELEBRITIES・6 DAYS AGO
Us Weekly

The cutest sight! During Prince William and Duchess Kate’s royal engagement at a local British hospital, they couldn’t resist cooing over a cockapoo therapy dog. “Who do you think Alfie, the therapy dog preferred?” their official Kensington Palace Twitter account wrote on Thursday, January 20, alongside snaps of the Duke of Cambridge, 39, and the Duchess of Cambridge, 40, taking turns holding the pooch.
ANIMALS・5 DAYS AGO
Entertainment Times