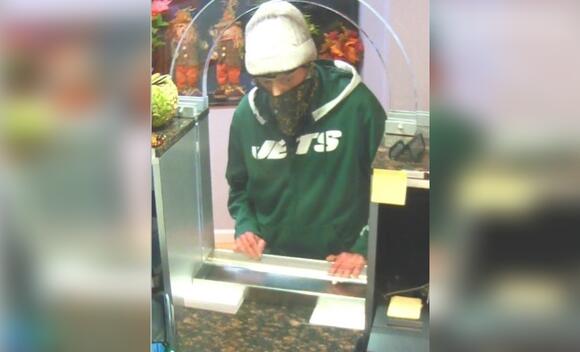 NEW YORK (1010 WINS) -- Police are on the lookout for a man they say is responsible for six bank robberies in Queens in just the past two weeks.

Police said the man they're looking for has been involved in a bank robbery pattern that began on Nov. 17 and has continued as recently as Nov. 26. Cops detailed four of the six incidents.

It was then that cops said he passed a note to a teller demanding cash. The teller complied and the suspect fled on foot, making off with about $337, police said. No injuries were reported. 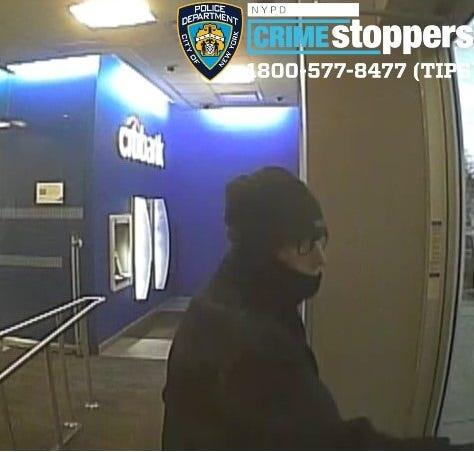 The next disclosed incident occurred on Nov. 20, when the suspect entered a Queens Savings Bank on 108th Street, passed a note demanding cash and fled with $800, police said.

The next two crimes happened on Nov. 26, one at 10:30 a.m. at a Santander Bank on Roosevelt Avenue and the other at 4:30 p.m. at a Citi Bank on Metropolitan Avenue. 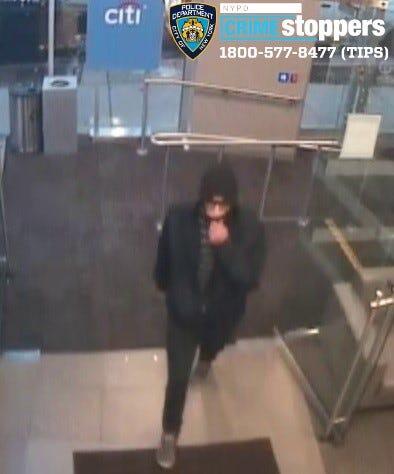 In the first incident, he demanded cash via note, but the teller refused and he ran off, police said. In the second incident, police said he passed a note and took over $2,100 from the teller.

Police said in the most recent incident, the man fled in a Toyota Corolla that possibly had temporary tags on it.

The NYPD released several photos of the man, who is described as light-skinned, about 6-feet, 1-inch tall, 150 lbs., with blue eyes.

Officials are searching for a man accused of breaking into a Bronx Burger King earlier this month, according to the NYPD.
BRONX, NY・1 DAY AGO
1010WINS

An off-duty NYPD officer was arrested after he allegedly punched a drunk driver repeatedly and hurled racist insults at him during a confrontation in Brooklyn over the weekend, police said Monday.
BROOKLYN, NY・5 HOURS AGO
1010WINS

The NYPD is looking to identify a knife-wielding man sought in connection to a slashing that happened during a fight on a Bronx street over the weekend, authorities said.
BRONX, NY・7 HOURS AGO
1010WINS

The NYPD is searching for a man who is sought in connection with a robbery that occurred at a TJ Maxx in Brooklyn last month, authorities said.
NEW YORK CITY, NY・1 DAY AGO

Police launched an investigation after a group of suspects beat and robbed a 24-year-old man at gunpoint inside a Manhattan subway station early Monday, authorities said.
NEW YORK CITY, NY・1 DAY AGO
1010WINS

The body of a man believed to be homeless was found aboard a subway train in Brooklyn on Monday morning, according to authorities.
BROOKLYN, NY・6 HOURS AGO
1010WINS

The NYPD released surveillance footage on Tuesday of a knife-wielding man who is wanted in connection to an assault that occurred last month in Harlem.
NEW YORK CITY, NY・1 HOUR AGO

Yonkers Police are asking people to avoid an area of Main Street as officials investigate a police-involved shooting.
YONKERS, NY・19 HOURS AGO
1010WINS

Officials discovered the decomposed body of an 84-year-old inside his Brooklyn home over the weekend, police confirmed Monday.
NEW YORK CITY, NY・1 DAY AGO
1010WINS

A school bus driver has been arrested and charged after a 15-year-old girl was fatally struck in a hit-and-run collision in Brooklyn Monday morning, according to police.
BROOKLYN, NY・18 HOURS AGO
1010WINS

Several people were hurt and at least one person was killed in a massive fire and building collapse at a Bronx home that may have been caused by a gas explosion.
BRONX, NY・2 HOURS AGO
1010WINS

A man who escaped police custody from a Brooklyn hospital is back behind bars and facing new charges, police said late Saturday.
BROOKLYN, NY・2 DAYS AGO
1010WINS

The first reported shooting happened Friday just before 10 p.m. at the Lillian Wald Houses on the Lower East Side, located at 691 FDR Drive.
NEW YORK CITY, NY・3 DAYS AGO
1010WINS

A 4-year-old girl died days after she sustained critical injuries from a car crash on Long Island that also led to the arrest of her mother, who was allegedly driving while on drugs at the time, New York State Police said Monday.
RIVERHEAD, NY・21 HOURS AGO
1010WINS

Police have charged a homeless man after he allegedly pushed a 40-year-old Asian woman to her death in front of a subway train in Times Square on Saturday morning.
NEW YORK CITY, NY・2 DAYS AGO
1010WINS

Police said it all happened around 8:30 a.m. on East 41st Street and Fifth Avenue in Midtown, when the 59-year-old victim approached Xavier Israel, 25, of Ohio, as he lied on the ground.
NEW YORK CITY, NY・4 DAYS AGO
1010WINS

A woman died after she was ejected from a vehicle when it fell down an embankment in North Haledon early Monday morning, police said.
NORTH HALEDON, NJ・3 HOURS AGO
1010WINS

Revel, the electric moped sharing company, has suspended services in the Bronx following a string of thefts.
NEW YORK CITY, NY・3 DAYS AGO