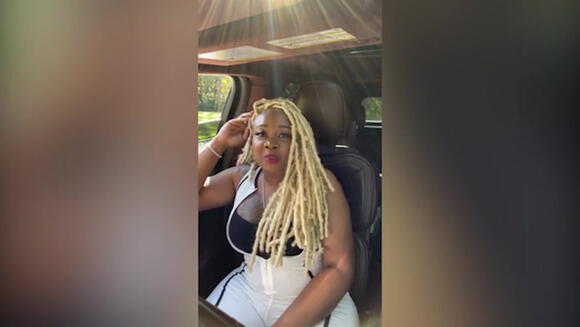 A married couple has left behind eight children after they died in a murder-suicide just six months after moving to Atlanta , Georgia to expand their businesses.

Keianna Burns, 44, and Ronnell Burns, 46, were home alone on 6 November just before 9pm when Ms Burns shot her husband to death and then killed herself with the weapon, police have said.

Ms Burns posted a video of herself singing and dancing with one of her children just hours before the shootings. Police said the child was with a relative when the couple died.

On social media, Ms Burns shared images of her Maserati Levante that her husband gave her last year. She also showed off a car trunk filled with bags by Louis Vuitton.

“Right now my husband is at a retreat. I stayed back because we have our children here,” she said during her Facebook live . “However, I just hopped on here because you have to be prepared for life changes no matter what it is that is taking place. I’m trying to encourage someone because things in your life can change for the good or the bad overnight, literally. And if you don’t feel like you are a strong enough individual, some things may take you out.”

“Like real talk, I have some very positive people on my timeline and they help me through my gloomy days because yes I do have them,” Ms Burns added. “Honestly if I’m being totally perfectly honest, I’m having one right now. And the reason I’m going live is sometimes you gotta reach out and tell people that you need love. You need support, you need care. You just need a hug. And honestly you guys, I need that. I need that right now.”

“God knows I would do anything to wake up from this nightmare,” she wrote on Facebook on 23 October.

Friends and co-workers shared their grief on social media following the news of their deaths.

“To know this couple Keianna Burns and Ronnell Burns you had no choice but to love them,” Rowena Terry wrote on Facebook. “They were selfless, loving, and caring. A lot of ppl say money makes you act different but not them. They are so down to earth. And very humble. They lit up any room they walked in. Motivational to others and only wanted to change the world.”

Police have said that they have no record of domestic violence at the family’s home. The couple had both their own children as well as kids from previous relationships.

Mr Burns was featured on an episode of Divorce Court eight years ago as he separated from his first wife. He accused her of cheating, while she said he also cheated and destroyed her credit history.

He said in a YouTube video that he also considered divorcing Keianna Burns.

But in the video recorded earlier this year, he added that they eventually chose to try to work it out.

prayers up going up for those 8 Angels. 🙏🙏she had to many materialistic things in her life and not any love. 😪😪Lord bless her sole. 💞💞she gave more than she got in return. 🤔🤔may God keep his arms around those kids.🙏🙏💓💞

this woman was a complete mess. bi-polar certainly and it's sad that she had all these Facebook followers who thought she had it all together when in reality she was living a lie!

This is so unbelievably sad. She reached out for help and didn’t get it or at least not enough help. Prayers for those 8 parentheses children 🙏🙏😢

Rapper J $tash Dead In Murder-Suicide, After Killing His Girlfriend At Home With Three Children Inside

Rapper J $tash was pronounced dead from a self-inflicted gunshot wound after he reportedly gunned down his girlfriend, Jeanette Gallegos, while three kids were in the home on New Year’s Day in Temple City, California, according to KTLA. Temple Sheriff’s deputies responded to a possible domestic violence call around...
TEMPLE CITY, CA・12 DAYS AGO
WESH

LAND O' LAKES, Fla. — Pasco County deputies are trying to make sense of an apparent murder-suicide that left a mother and two children dead in Land O’ Lakes Wednesday evening. Authorities were alerted to the incident after the father, whose name has not been released, came home...
PASCO COUNTY, FL・4 DAYS AGO
THV11

A Portland woman who police say was shot and killed by her son in a murder-suicide was remembered Thursday for her playful sculptures and dedication to supporting fellow artists. Police found Karen Friedstrom, 74, dead on Tuesday afternoon in the Hazelwood home she shared with her 47-year-old son Justin Friedstrom....
PORTLAND, OR・5 DAYS AGO

Mother and child among 3 dead in Alabama murder-suicide, officials say

TUSCALOOSA, Ala. (WBRC/Gray News) – A mother and her 8-year-old son were shot and killed early Thursday morning in what authorities are calling a murder-suicide. According to WBRC, the bodies of 34-year-old Darrin Lamar Patton Jr., his girlfriend Derika Shanice McGhee, 29, and her 8-year-old son, Aiden Carter Williams, were found in a home in Alabama.
TUSCALOOSA, AL・11 DAYS AGO
WFLA

HILLSBOROUGH COUNTY, FL. – The Hillsborough County Sheriff’s Office is conducting a homicide investigation in the Lake Magdalene area in Hillsborough County. At approximately 7:00 p.m. on Monday, January 10, 2022, deputies were dispatched to the 14000 block of Cherry Lake Drive. Upon arrival, deputies discovered the body of a female victim.
HILLSBOROUGH COUNTY, FL・7 DAYS AGO
ABC13 Houston

When the wedded pair's family could not reach them, they called deputies to search the home where officials found the couple shot to death.
TOMBALL, TX・10 DAYS AGO

The family was first discovered by a relative Sunday afternoon on Baker Road in Glenwood. 25-year-old David Sawyer Claborn, his wife, 24-year-old Meredith Claborn, and the couple’s 23- month-old daughter were all found dead.
GLENWOOD, AR・8 DAYS AGO
fox26houston.com

Authorities are investigating a shooting that left two people dead in northwest Harris County Friday afternoon. The shooting was reported in the 12500 block of Pavilion Court on Friday. Based on preliminary information from the Harris Co. Sheriff's Office, family members told officials they were trying to call the unidentified...
HARRIS COUNTY, TX・11 DAYS AGO
KHOU

HARRIS COUNTY, Texas — The bodies of three teens were found Tuesday at a Crosby-area home, according to Harris County Sheriff Ed Gonzalez. Gonzalez said a family member made the discovery inside a home in the 4500 block of Wolcek Road, which is just east of Crosby proper. Gonzalez...
HARRIS COUNTY, TX・8 HOURS AGO
fox5atlanta.com

ATLANTA - The Atlanta Police Department is working to learn why a person was shot in Southwest Atlanta before they died at the Grady Memorial Hospital. Police said officers went to the hospital at about 5:20 a.m. on Wednesday after receiving a report of a gunshot victim from Grady officials.
ATLANTA, GA・6 DAYS AGO

CHANDLER, Ariz. - Police are investigating an apparent murder-suicide in Chandler after a man and a woman were found shot to death on Jan. 9. According to police, 76-year-old Sheldon Butler called police Sunday morning saying that he had shot his wife. Officers responded to the home near Gilbert Road...
CHANDLER, AZ・8 DAYS AGO
WYFF4.com

GREENWOOD, S.C. — Detectives with the Greenwood Police Department have made an arrest in a murder investigation from last year. On Jun. 12, 2021, Quinton Payne was found at a home on Klugh Street with a gunshot wound, police said. They said Payne died at the scene. Police announced...
GREENWOOD, SC・7 DAYS AGO
FOX 2

Children ran from a home during an argument in the 1200 block of Fenton Ridge today, according to police. They heard gunshots as they fled.
FENTON, MO・1 DAY AGO
The Free Press - TFP

PASCO COUNTY, FL. – Pasco Sheriff’s deputies are on the scene of what appears to be a murder-suicide in the Lake Padgett area of Land O’ Lakes. Deputies say preliminary information indicates there are three deceased individuals: one adult female and two children. “It appears that a...
PASCO COUNTY, FL・6 DAYS AGO

PASCO COUNTY, Fla. — A young mother from the Land O' Lakes area died by suicide after reportedly killing her two children Wednesday. The father of the 9-month-old and 3-year-old kids returned home and found them, along with his wife, dead before calling 911, Pasco County Sheriff Chris Nocco explained in a news conference Thursday.
PASCO COUNTY, FL・6 DAYS AGO
KTLA

The mother of three children found dead inside a central California home has been charged with murder, officials said Thursday. Deputies doing a welfare check found the children, ages 8, 5 and 3, Wednesday in a Merced County apartment. They also found their mother, Patricia Ortiz, with what appeared to be self-inflicted wounds, the Merced […]
MERCED COUNTY, CA・5 DAYS AGO
CBS Chicago

CHICAGO (CBS) — A woman and her ex-husband were found dead Tuesday morning in an apparent murder-suicide at an apartment complex in Naperville. Police said, around 7:30 a.m., officers responded to a domestic incident at an apartment complex on the 1300 block of Crab Apple Court. After several attempts to contact the people inside the apartment, officers entered the unit, and found a woman who had been shot. She was taken to the hospital, where she was pronounced dead. Officers later found her ex-husband, a man from Michigan, dead of an apparent self-inflicted gunshot wound inside the apartment. Police said the incident remains under investigation.
NAPERVILLE, IL・11 HOURS AGO
WFLA

Two people have died in what deputies say appears to be a murder-suicide in Mulberry Sunday night.
POLK COUNTY, FL・1 DAY AGO