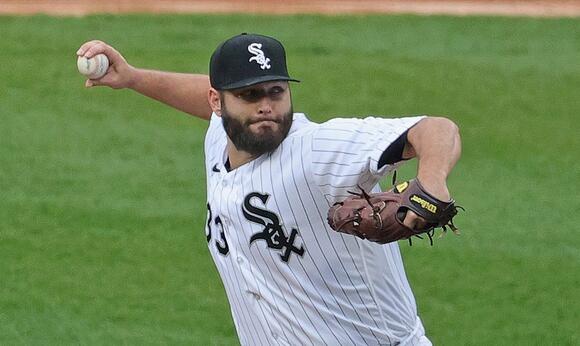 (670 The Score) With time to reflect on the White Sox’s season in 2021, right-hander Lance Lynn was proud of his club’s accomplishments.

And while the finish was mighty disappointing, Lynn believes the White Sox learned a lot as they lost to the Astros in four games in the American League Division Series after going 93-69 and winning the AL Central.

“We had a good year, obviously it didn't finish the way we wanted it to,” Lynn said. “When you look at making the playoffs two years in a row, the 60-game season in 2020 was a part of it but last year we saw the ups and downs of a season and we suffered injuries. I think we saw we are capable of winning the games we are supposed to. We saw the atmosphere of the playoffs, and many of these guys hadn't ever been in it. Moving forward, we know what kind of quality baseball we need to play to get to the ultimate goal of winning a World Series championship.”

Lynn, 34, spoke Thursday as he was fresh off finishing third in the AL Cy Young race Wednesday. Blue Jays left-hander Robbie Ray won the award, while Yankees right-hander Gerrit Cole was the runner-up.

“This is the first time I have been in the final three,” Lynn said. “I finished in the top 10 the last few years. I am making strides in the ultimate goal of the individual (award), but you are not going to be there without your team.”

Lynn in July signed a two-year contract extension with the White Sox that runs through 2023. He’ll again be tasked with leading a strong rotation, one that's set to have a bit of a different look as right-hander Michael Kopech moves into a starting role after working primarily out of the bullpen in 2021. Lynn is bullish on what Kopech will bring to the rotation.

"He has the desire to be great and the physical ability to do it,” Lynn said. “He has a pitching coach (in Ethan Katz) that is there to help him attain as much success as possible. I know Michael will lean on the guys in the rotation on how to approach and do things. You know with his desire and work, he has a chance to be a very good starting pitcher.”

The White Sox introduced the first Major League Baseball jersey that had a player’s name on the back. It was the brainchild of owner Bill Veeck. At first the name was only on the road jersey, but over time, teams stitched names on the backs of both road and home uniforms.
MLB・2 DAYS AGO
670 The Score

Roger Clemens, the seven-time Cy Young winner, is in his final year of eligibility on the Hall of Fame ballot.
MLB・1 DAY AGO
Inside The Blue Jays

Ahead of the January 25th Baseball Hall of Fame announcement, we look at five former Blue Jays on the ballot and their chances at induction
MLB・2 DAYS AGO

BOSTON (CBS) — It wouldn’t be Hall of Fame season if a member of the baseball media wasn’t twisting himself into a pretzel for all the world to see. Enter Jack Curry of the Yankees’ broadcast network. Curry revealed his ballot on Tuesday, which is the day that the Baseball Hall of Fame will announce which players — if any — will earn enshrinement this year. Curry used eight of his allowable 10 votes this year, and for the first time in their 10 years of eligibility, Barry Bonds and Roger Clemens received his vote. The reason Curry hadn’t voted for Bonds and...
MLB・3 HOURS AGO
Audacy

Yankees legend Alex Rodriguez randomly showed up on the TV in the fourth quarter of Saturday’s divisional playoff game between the Packers and 49ers.
NFL・2 DAYS AGO
USA TODAY

Three weeks from when pitchers and catchers usually report and no one knows when spring training will start or if it will be a truncated schedule.
MLB・2 DAYS AGO
Inside The Phillies

Jean Segura doesn't put up flashy numbers or make dazzling defensive plays, but all together he is one of the most well-rounded players in the National League.
MLB・2 DAYS AGO

The two sides are starting to step up the pace of their meetings.
MLB・1 DAY AGO
Inside The Dodgers

The MLB and MLBPA are set to meet on Monday to continue CBA negotiations.
MLB・2 DAYS AGO
Inside The Dodgers

Add video gaming to Betts' growing list of non-baseball interests.
MLB・1 DAY AGO
Inside The Phillies

Five years after signing on as Phillies general manager, Matt Klentak has accepted a job as special assistant for the Milwaukee Brewers.
MLB・1 DAY AGO

Alec Bohm was one of the league's worst fielders in 2021. As trade rumors swirl this offseason, it would mean a lot for the Phillies if Bohm could put a hammerlock on his natural position.
MLB・2 DAYS AGO
Sports Illustrated

The two sides met on Tuesday, marking the second consecutive day of discussions between the parties.
MLB・1 HOUR AGO
92.3 The Fan

Should MLB players from the steroid-era be allowed into the Hall of Fame? Jay Crawford says it does a disservice to the sport to ignore them. Hear why with Baskin and Phelps!
MLB・3 HOURS AGO
97.1 The Ticket

The Tigers spent about $225 million this offseason on Javy Baez, Eduardo Rodriguez and Tucker Barnhart. They’ll join a core of young talent in Detroit.
MLB・2 HOURS AGO
Inside The Blue Jays

Carter's fiery demeanor got him noticed by Blue Jays scouts. Now it's his humility off the field that's impacting the city of Toronto.
MLB・1 DAY AGO
USA TODAY

Major League Baseball and the players union continued to make slow, incremental progress Tuesday, but they are still a long way from an agreement.
MLB・22 MINUTES AGO
670 The Score

If there is a Major League season, the Mets are expected to be serious contenders.
MLB・18 HOURS AGO