Blackhawks get their first win against the Kraken 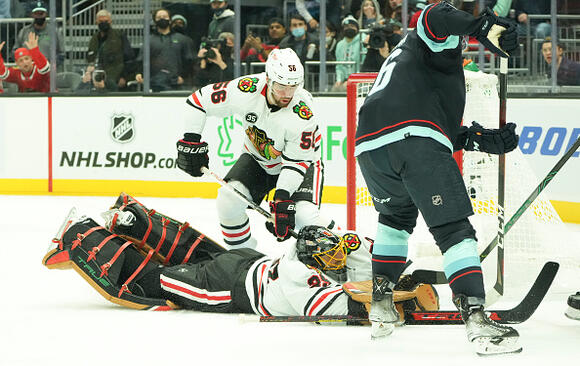 SEATTLE – It was a unique moment in team history that doesn’t happen very often: Facing a new NHL team for the first time.

Wednesday was another one of the moments as the Blackhawks faced the Seattle Kraken at Climate Pledge Arena for their first match-up with the new team. Like they have in the past, they were able to get out with the victory.

A three-goal advantage stood up against late barrage of shots by the hosts in a 4-2 victory that’s the fourth-in-a-row to start interim head coach Derek King’s tenure with the team.

Marc-Andre Fleury stopped 31 of 33 shots from the Kraken on the evening, with a number of them coming late, to make the early advantage hold up. Seth Jones got a score in the first period, Alex Debrincat in the second, then Patrick Kane in the third, and after Seattle got two back, Jake McCabe got an empty netter to seal the victory.

Wednesday was the 29th time the Blackhawks had faced an expansion team for the first time and improved their record to 17-8-4. They’ve won six of their last seven first games with their last loss coming against the Golden Knights in 2017.

They defeated the Blue Jackets, Wild, Thrashers (now Jets), Predators, and the Ducks in their first games against those franchises.

SEATTLE – For the visitors, it was arguably their best stretch of hockey of the season while the hosts were dealing with the worst time in their very short history. That was the situation as the Blackhawks, who were on a season-high four-game winning streak, visited the Kraken, who’ve struggled during a nine-game losing streak. But fortunes flipped on Monday afternoon, and while Derek King’s team was able to get a point, their winning streak is now gone.
NHL・14 HOURS AGO
WGN News

SEATTLE (AP) — After a month of increasing frustration, it seemed fitting that Joonas Donskoi, who had yet to score all season, was the one to finally snap the Seattle Kraken’s losing streak. Ryan Donato scored the tying goal early in the third period, Donskoi scored the deciding goal in the shootout and the Kraken […]
NHL・5 HOURS AGO
WGN News

CHICAGO – With the team down a number of players with injury, including one of their best guards off the bench, the Bulls have looked to a former Illinois star for some help. On Friday, the Bulls signed guard Malcolm Hill to a ten-day contract, which they’re allowed to do as part of the COVID-hardship […]
NBA・3 DAYS AGO
Sportsnaut

The NHL season officially started back on October 12. In this article, we track all the NHL games today as
NFL・3 HOURS AGO

Exciting nights have been rare for the Blackhawks this season. Complete performances have been even more rare. But for their lone Saturday home game of the season, the Hawks delivered both, beating the Ducks 3-0 in a fast-paced, high-quality game to earn their fourth consecutive victory. ‘‘That’s probably one of...
NHL・2 DAYS AGO
Daily Herald

Fleury nearly saves the day, but Blackhawks fall to Kraken in shootout

Marc-Andre Fleury's had plenty of spectacular games over his illustrious career. Most obviously came with Pittsburgh and Vegas, but the display he put on during the Blackhawks' 3-2 shootout loss in Seattle on Monday has to rank near the top. "Today I was sitting on the bench," said forward Dominik...
NHL・15 HOURS AGO
Seattle Times

Joonas Donskoi, Kraken relieved with finally getting a win

Joonas Donskoi had scored in the shootout before for the Kraken. That was in the first shootout in franchise history Dec. 1, when they lost in Detroit. On Monday, in a 2-2 game where Ryan Donato had just given Seattle the shootout lead, he had the chance again, but this time, to win it.
NHL・12 HOURS AGO

Joonas Donskoi, who has yet to score a goal this season, netted the clincher in a shootout as the Seattle Kraken snapped a nine-game losing streak with a 3-2 victory against the visiting Chicago Blackhawks on Monday afternoon. Vince Dunn and Ryan Donato scored in regulation and Donato also tallied...
NHL・15 HOURS AGO
Second City Hockey

Having extended their win streak to four games with a shutout of the Anaheim Ducks on Saturday, the Chicago Blackhawks will look to beat the Seattle Kraken for the second time and extend their winning streak to five. The Kraken, having fallen all the way to the bottom of the...
NHL・23 HOURS AGO
NHL

One: Getting to the Net More, Winning the Extra Puck Battle. While some fans might think Kraken head coach Dave Hakstol has to be highly frustrated right about now, given the team's nine-game losing streak going into Monday's Martin Luther King Jr. Day matinee, he most decidedly says that's not the case.
NHL・1 DAY AGO
NHL

TV: NBCSCH | RADIO: WGN 720 AM | STREAM: MyTeamsApp (In Market) & ESPN+ (Out of Market) The Blackhawks and Seattle Kraken meet for the second time this season in matinee game on the West Coast on Martin Luther King, Jr. Day. It's Chicago's second trip to Seattle this season, topping the expansion team 4-2 on Nov. 17 at Climate Pledge Arena.
NHL・1 DAY AGO

Warriors Starting Lineup Against The Timberwolves

The Golden State Warriors have announced their starting lineup for Sunday's game against the Minnesota Timberwolves.
NBA・1 DAY AGO
Sportsnaut

In their latest game, the Vancouver Canucks received a jolt from both Elias Pettersson and their sputtering power play in
NHL・10 HOURS AGO
WGN News

Derrick Jones Jr. becomes the latest Bulls’ player to exit the lineup with an injury

CHICAGO – While the team is enjoying success early in the 2022 calendar year, injuries have begun to pile up a little bit for the Bulls, with another player exiting the lineup for at least a couple of weeks. This time it’s forward Derrick Jones Jr., who will be out of the lineup 2-4 weeks […]
NBA・3 DAYS AGO
WEEI Sports Radio

With every league roughly midway through the 2021-22 season, we take a look at how some of the Boston Bruins’ top prospects are doing, including Fabian Lysell, Jack Studnicka and Mason Lohrei.
NHL・15 HOURS AGO
Sportsnaut

After the first 20 minutes, it seemed as if the Vegas Golden Knights were going to coast to victory in
NHL・10 HOURS AGO
Sportsnaut