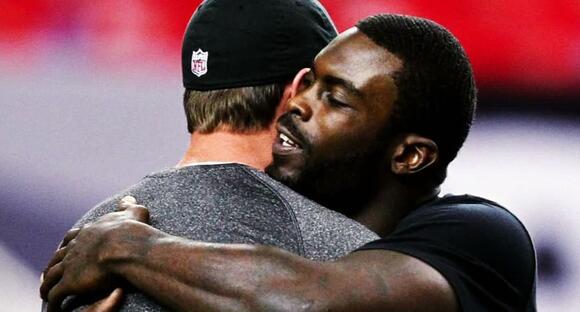 For Michael Vick to ultimately be right about this edition of the Atlanta Falcons, they need more weapons.

Michael Vick has an increasingly powerful voice now that he's not only an Atlanta Falcons legend but also a FOX analyst. And he is speaking powerfully now in his endorsement of Falcons leaders old and new.

On Smith: “I think Arthur is doing a great job. The culture that he’s brought from Tennessee (where Smith was the offensive coordinator), I think it’s translating. ... I think we’re playing tough, good football.''

On Ryan: "In regard to Matt, I think Matt is playing consistent, playing amazing, and right now it looks like he has three or four years left in him.”

Vick's visit with the Great Dane Nation podcast hosted by former Falcons’ kicker Morten Andersen (hat-tip The Falcoholic ) doesn't necessarily mean the entire Falcons audience has to agree with him.

There is certainly the hope that Atlanta's 4-5 start is a positive thing ... but for most observers, there is still much to prove - with maybe more proof coming in the "Thursday Night Football'' visit from the New England Patriots .

And while it's easy to agree with Vick's view ( and Patriots coach Bill Belichick's) of rookie tight end Kyle Pitts - “I think Kyle Pitts has been a big addition,'' Michael said. "His presence itself opens things up due to double-teams'' - Vick's endorsement of the work of long-time QB Ryan is sure to lead to some bar-room debate.

Ryan is, like Vick himself, a legendary Falcons figure. And his contract is part of the reason the "three or four years'' is a conversation piece.

For Michael Vick to ultimately be right about this edition of the Atlanta Falcons, Smith needs more weapons (and it is in part his job to accumulate those) and Ryan does, too (and then Ryan needs to fully utilize those).

The group is about to take the stage ... with a chance to prove Michael Vick right.

Earlier this season, Atlanta Falcons wide receiver Calvin Ridley stepped away from the field to focus on his mental health. According to NFL Network insider Mike Garafolo, this situation involving Ridley’s self assessment has not changed, but the Falcons are still holding out hope that they’ll have their 27-year-old wideout back for the 2022 season.
NFL・1 DAY AGO
Falcon Report

The concept of a "home-town discount'' is a fun one, a warm-and-fuzzy one. And it can happen. But ...
NFL・23 HOURS AGO
Sportsnaut

NFL Network reporter Mike Garafalo believes a trade is in the works for the Falcons and Ridley.
NFL・1 DAY AGO
Falcon Report

Maybe the best way for the Falcons to approach watching the Bucs is to simply try to learn from them …
NFL・2 DAYS AGO
NOLA.com

The season may be over for New Orleans Saints, but one player is still dealing with ramifications from last week's win over the Atlanta Falcons as defensive tackle David Onyemata was fined for one of his hits, a source informed the Times-Picayune. Onyemata's fine was for roughing the passer, a...
NFL・1 DAY AGO
atlantafalcons.com

We're through the first week of the Falcons offseason, with the playoffs set to start this weekend. Gotta admit that it'll feel weird not covering a Falcons game on Sunday. For as crazy as the season is, I'm gonna miss it. Terry Fontenot and Arthur Smith obviously wish they were...
NFL・2 DAYS AGO

The notion of the Falcons protecting Matt Ryan should be at the forefront this offseason.
NFL・58 MINUTES AGO
Falcon Report

Cordarrelle Patterson is a free agent, and Mike Davis might not be back. Here's a look at five running backs the Atlanta Falcons could target in free agency.
NFL・22 MINUTES AGO
nfltraderumors.co

The Falcons have had stability at the quarterback position most teams only dream about. They've had an upper-tier quarterback in Matt Ryan for 14 straight seasons, someone who is as stable and professional and as productive as it gets. That was the case again in 2021, where the Falcons increased...
NFL・5 HOURS AGO

Earlier this week, we talked about Saints free agents the Falcons might be interested in, given the deep ties general manager Terry Fontenot has to that team. Today, let’s talk about Titans free agents who have ties to head coach Arthur Smith and defensive coordinator Dean Pees. There’s no...
NFL・2 DAYS AGO
The Spun

FOX NFL broadcaster and former Cowboy great Troy Aikman didn’t seem to be too happy that he and Joe Buck were in Tampa Bay rather than Dallas. As Buck teased the next Sunday NFC playoff matchup between the Cowboys and 49ers on CBS, Aikman voiced his displeasure with some coded language.
NFL・20 HOURS AGO
Sportsnaut

Jerry Jones reaction to loss: Dallas Cowboys owner sent a stern message that sure sounded like a direct shot at Mike McCarthy after Sunday’s loss. Let’s spare hyperbole: The Dallas Cowboys playoff loss on Sunday afternoon was nothing short of embarrassing. Dallas entered the postseason with its sights...
NFL・16 HOURS AGO

FOX analyst Terry Bradshaw faced some criticism for what he said about the Philadelphia Eagles defense on Sunday morning. Bradshaw, a Hall of Fame quarterback turned analyst for FOX, believed the Philadelphia Eagles’ secondary could be their weakness against Tom Brady and the Tampa Bay Buccaneers on Sunday afternoon.
NFL・22 HOURS AGO
Falcon Report

It felt like January 1991 again for Sal Maiorana as Josh Allen and the Buffalo Bills put forth perhaps the best performance in team history.
NFL・1 DAY AGO
Sportsnaut

While the Buffalo Bills took the field as favorites in Saturday’s AFC Wild Card Game, many believed the New England
NFL・1 DAY AGO