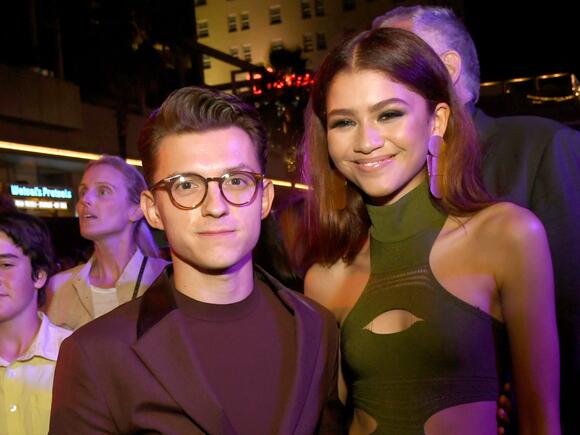 Tom Holland and Zendaya felt that their privacy was “robbed” after the paparaazi leaked photos of them kissing.

In the recent GQ Men of the Year issue, Holland spoke about their fame and how “privacy isn’t really in our control anymore.”

“I’ve always been really adamant to keep my private life private because I share so much of my life with the world anyway,” he said

Before divulging too much about the relationship, Holland stopped himself, adding that he respects her “too much” and that they’ll discuss it when they are “ready to talk about it together.”

Zendaya also spoke to the outlet about the photos and said it was “weird and confusing.”

“The equal sentiment [we both share] is just that when you really love and care about somebody, some moments or things, you wish were your own,” she said.

Since the photos of them kissing made the internet rounds, they’ve been spotted out together multiple times, including a mutual friend’s wedding in late August.

In September, the couple fina made their relationship Instagram official when Holland posted a sweet behind-the-scenes in honour of Zendaya's birthday.

According to Comments by Celebs, Zendaya responded to the post with,“Calling now.”

The trailer for Spider-Man: No Way Home, Holland and Zendaya’s third Spider-Man movie together, dropped on Tuesday.

“This true moment in cinematic history is about to come true…and it was crazy,” Holland said according to Variety.

The film is set to hit the big screens on December 17.

Will Jacob Elordi Get A Second Chance From Zendaya? Tom Holland Should Worry

Zendaya's ex-boyfriend Jacob Elordi is reportedly "secretly yearning" for another shot with her. Is Zendaya going to have to pick between Tom Holland and her ex?. Zendaya and Jacob Elordi remain at the heart of dating rumors despite now having their respective new relationships with others, especially when they began production for the third season of the blockbuster HBO drama. The "Euphoria" lead is currently seeing Tom Holland, while her series co-star is, allegedly, with Olivia Jade Giannulli.
CELEBRITIES・10 DAYS AGO
buzzfeednews.com

At long last, season two of Euphoria is finally here. Over two years since its first season premiered, the hit HBO series, which stars Zendaya, finally returned to screens on Sunday with an action-packed first episode. And despite a generous serving of onscreen drama, a particular behind-the-scenes moment still managed...
TV & VIDEOS・10 DAYS AGO
Life and Style Weekly

Tom Holland and Zendaya Are Attached at the Web! See the ’Spider-Man’ Costars’ Relationship Timeline

Tom Holland and Zendaya didn’t immediately start dating after meeting on the set of Spider-Man: Homecoming. The costars developed a solid friendship over the years. But after sparking romance rumors more than once, the two unintentionally confirmed they were dating by the summer of 2021. In July of that...
BEAUTY & FASHION・7 DAYS AGO
Life and Style Weekly

Tom Holland and Zendaya Are the Perfect Spidey Couple! See How Their Romance Is Going

The only thing better than an onscreen love is an offscreen romance! Tom Holland and Zendaya are one of Hollywood’s most high-profile couples, but they like to keep it under wraps from the public eye. Since they’re usually quiet about their connection, it’s sometimes difficult for fans to ascertain...
CELEBRITIES・8 DAYS AGO

Spider-Boy is no more. That is, of course, according to Spider-Man star Tom Holland. In a recent promotional stop with Sony Pictures Japan, Holland says the latest movie in his Marvel Cinematic Universe trilogy is all about his character turning from a boy into a man—Spider-Man. "It really has...
MOVIES・11 DAYS AGO
Elle

Kanye West's rapid-fire new romance with Julia Fox continues to heat up in Los Angeles—at least publicly. The two were photographed by paparazzi kissing and generally “pack[ing] on the PDA while leaving Delilah’s in West Hollywood,” per the photo agency. The new couple matched in black, Fox wearing a leather black crop top and matching pants.
LOS ANGELES, CA・9 DAYS AGO
thenerdstash.com

Tom Holland was reportedly asked to host the 2022 Oscars ceremony. It’s been revealed that the Academy is looking for someone to host the Oscars this year. Apparently, our current friendly neighborhood Spiderman actor is in the running! In an article by The Hollywood Reporter, it’s said the Academy has reached out to Holland “to explore the possibility.” Tom Holland, the now 25-year-old British actor, has expressed interest in the past of wanting to host the Oscars. As of now, it is unclear what came of those conversations between the Academy and Holland.
CELEBRITIES・10 DAYS AGO
People

Andrew Garfield is officially on Tom Holland's hype squad!. The Tick, Tick ... Boom! star, 38, caught up with PEOPLE after receiving a SAG Award nomination for his performance as Rent creator Jonathan Larson in the Netflix film. During the conversation, Garfield commented on the buzz surrounding his fellow Spider-Man potentially hosting the 2022 Academy Awards.
CELEBRITIES・10 DAYS AGO

Following the release of Spider-Man: No Way Home, fans of Zendaya and Tom Holland are looking for any content they can to satisfy their love for the couple. Now, eagle-eyed followers of Zendaya’s beloved series Euphoria think they’ve found it. After the season 2 premiere of the HBO...
CELEBRITIES・9 DAYS AGO
POPSUGAR

Tom Holland Was Spotted on the Set of Euphoria Season 2

Tom Holland has earned a spot as an honorary Euphoria cast member. Following the season two premiere on Jan. 9, Siyon Foster shared a few behind-the-scenes photos of the cast, and it didn't take eagle-eyed fans long to spot Holland lurking in the background. If you scroll to slide four, break out a magnifying glass, and squint a little, you'll see the Spider-Man: No Way Home star throwing up matching peace signs with Zendaya. The photo is admittedly blurry, and almost everyone is tagged except Holland, but we've seen enough Spider-Man movies to recognize that curly brown hair anywhere.
TV SERIES・11 DAYS AGO
Popculture

Zendaya's boyfriend Tom Holland is ready to join her on HBO's Euphoria, but Zendaya is not hoping to land him a major role in the series. Zendaya and Holland revealed early in 2021 that they are a real-life couple in addition to an on-screen couple in the Spider-Man movies. During their Spider-Man: No Way Home press tour, Holland even expressed interest in joining Zendaya on Euphoria, which she said would be an Easter egg if anything.
TV & VIDEOS・11 DAYS AGO
GeekTyrant

Fans had a blast at the movies this past month watching Spider-Man: No Way Home and seeing the three Spider-Man meme come to life. The film was a heavy and important chapter in the Tom Holland story arc, and it was cathartic to see our first Spider-Man, Tobey Maguire, as well as “middle child,” Andrew Garfield, back up in the roles of Peter Parker. We had already seen these two characters face immense loss and pain, and knew that Holland’s Parker could count on them as unique guides through his trauma.
MOVIES・4 DAYS AGO

"If the Euphoria producers need any ideas, here are some possible roles Tom Holland could play," says Mia Mercado, pitching Holland as "Background dancer in one of Rue’s hallucinations," "British foreign-exchange student" or "Spider-Man." "The idea of Tom Holland interacting with truly any character on the show is a spinoff series in itself," says Mercado. "Imagine an episode of Euphoria: Tom and Fezco Hang Out. HBO, Euphoria casting directors, et al., give the people what they want: our spry British boy in glittery eye shadow."
CELEBRITIES・9 DAYS AGO
CinemaBlend

Could Tom Holland Swing Over To TV And Appear On Euphoria? Here's What Zendaya Says

When Zendaya wasn't busy rubbing shoulders with some of the Marvel Cinematic Universe's biggest players in Spider-Man: No Way Home, she was working on the second season of HBO’s Euphoria, for which she earned an Emmy win following Season 1. However, one has to wonder if her on-screen and real-life boyfriend, Tom Holland, could make the jump to TV to pop up on the show. Well, the former Disney star recently shared her thoughts on the possibility.
TV & VIDEOS・13 DAYS AGO
rockdalenewtoncitizen.com

Zendaya is speaking out about the new season of "Euphoria." "It's a very different season, to be honest. I mean, tonally, it's different," she told NBC's "Today" on Tuesday. "I think it's far more emotional than the first season. Much like the film stock that we use this season, which is also different, it's high contrast, meaning the highs are high, the lows are low. And when it's funny, it's really funny. And when it's painful, it's really painful."
TV SERIES・11 DAYS AGO
fashionista.com

Prada's really getting it right with its Spring 2022 campaign casting. Days after unveiling Hunter Schafer as the face of its womenswear for the season, Prada began rolling out its Spring 2022 menswear ad, starring the incredibly charming, charismatic Tom Holland. And what a delightful surprise it was to see our favorite neighborhood Spider-Man in our inboxes, fronting his first big fashion campaign. (And for Prada!!!)
NEW YORK CITY, NY・8 DAYS AGO
Inside the Magic

One month has passed since director Jon Watts’ Spider-Man: No Way Home (2021) slung into theaters across the globe. With it came the return of Tom Holland as the titular character fresh from his stint as a world-saving Avenger, and a whole host of Multiversal action spanning three huge franchises.
MOVIES・7 DAYS AGO