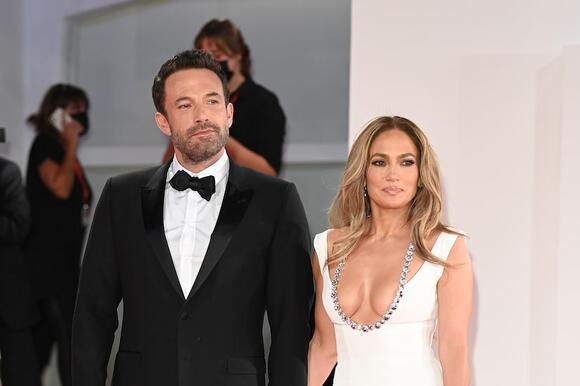 Jennifer Lopez and Ben Affleck seem to be happily in love, but would she be open to marriage again?

While promoting her new movie “Marry Me,” Jennifer told “Today’s” Hoda Kotb, “I don’t know. Yeah, I guess. You know me, I’m a romantic, I always have been, a few times. I still believe in happily ever after, for sure, 100%."

In “Marry Me,” Jennifer seemingly pokes fun at herself by playing a superstar singer who has been married several times.

“If you can’t laugh at yourself and just take it as it comes, I just don’t think about those things," Lopez quipped. "I feel like I’m a human being like everybody else. I’ve had my ups and downs, I’ve made mistakes and I’m really proud of where I’ve come to in my life and who I am as a person, as a mom, and as an actor and as an artist. So, yeah, it’s okay, everybody’s got that."

Last year, Lopez was set to wed Alex Rodriguez but they were forced to postpone due to the COVID-19 pandemic. They never made it down the aisle and called it quits earlier this year.

Lopez eventually rekindled her romance with former fiancé Ben Affleck after they called off their engagement nearly 20 years ago.

Since reconciling, the pair haven’t been shy about their relationship! They have been photographed holding hands and kissing on multiple occasions. 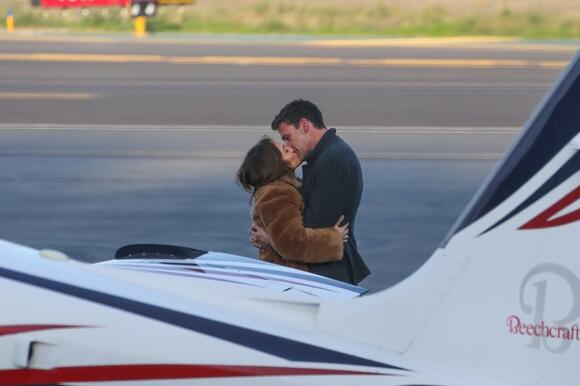 A source recently told Us Weekly, “Things just keep getting better for J.Lo and Ben. They’re so in love and it’s only a matter of time before they’re officially engaged. They are both all in and looking to spend the rest of their lives together. It doesn’t even cross their minds that it might not work out for the long term.”

Last month, “Extra’s” Jenn Lahmers spoke to Ben at a Los Angeles premiere of his film “Tender Bar,” where he noted that it is a “very happy time in my life.”

She just wants to marry so she can divorce again. Same story over and over again. If she said she wants to be single forever that might surprise everyone!

Personally I feel sorry for their kids…it’s like they only care about how they feel. The kids get the back seat. What a life for children to live…who’s your daddy, who’s your daddy this year. Brother it’s pathetic

Jennifer Lopez is reminding her Instagram followers that it's almost the weekend. In a post on Friday afternoon, she wished 192 million of her fans a "happy Friday" wearing a low-cut, long-sleeved lavender top with allover ruching and a stack of dangling antique-gold necklaces. She paired the sexy shirt with super-high-waisted jeans with wide legs, bringing even more attention to her trademark hourglass curves.
CELEBRITIES・4 DAYS AGO
In Style

Within thirty years, Jennifer Lopez has amassed a broad range of personal style signifiers (ab-baring crop tops, oversized hoops, sexy turtlenecks), and she just added another one to the list: the comfy-chic skirt. Over the weekend, J.Lo was spotted not once, but twice, wearing what might just be the perfect...
CELEBRITIES・8 DAYS AGO
Miami Herald

Ben Affleck and Jennifer Garner: The Way They Were

What once was. Ben Affleck and Jennifer Garner had one of Hollywood’s longest enduring love stories before they eventually called it quits after 10 years of marriage. The Argo director and the 13 Going on 30 star met in 2001, sparking a romance after Affleck and then-fiancée Jennifer Lopez ended their engagement. After a whirlwind relationship, Affleck and the West Virginia native wed in June 2005, six months before welcoming daughter Violet. Daughter Seraphina and son Samuel arrived in 2009 and 2012, respectively, and the actors announced their separation in June 2015.
CELEBRITIES・13 DAYS AGO
OK! Magazine

While stress is known to cause wrinkles, and Jennifer Garner recently found herself in the midst of drama after her ex-husband bashed their marriage, it's safe to say the 13 Going on 30 actress is still glowing at age 49. Garner posted a rare mirror selfie on Monday, January 10,...
CELEBRITIES・14 DAYS AGO

Jennifer Lopez, Ben Affleck Allegedly Agreed To Have A Baby To Help Save Their Relationship

Jennifer Lopez and Ben Affleck are allegedly doing everything that they can to help save their troubled relationship. In its Jan. 24 issue, Woman’s Day claimed that the couple is planning to have a baby via a surrogate.
CELEBRITIES・5 DAYS AGO
ETOnline.com

Jennifer Lopez Sets Her Intentions for 2022, Including to 'Be the Best Partner' to Ben Affleck

Jennifer Lopez is sharing her goals for 2022. The 52-year-old entertainer took to Instagram on Monday to share her intentions for the new year, and one of them has to do with her beau, Ben Affleck. In a pre-workout video, Lopez said she's "just thinking about being really mindful about...
CELEBRITIES・14 DAYS AGO
Mental_Floss

After a "Bad Experience" on Justice League, Ben Affleck Is Officially Done With Batman

Ben Affleck played Batman in both Batman v Superman: Dawn of Justice and Justice League, and while his performance earned some plaudits, he never seemed completely comfortable in the role. The actor recently went into detail on his decision to walk away from the character during an interview with the Los Angeles Times:
MOVIES・13 DAYS AGO

Ben Affleck made a spectacle of himself last month when he seemingly blamed Jennifer Garner in part for this alcoholism. Is he now teetering on the verge of a total breakdown? Gossip Cop investigates.
CELEBRITIES・6 DAYS AGO
EW.com

There are few bombs more infamous than Gigli. "If the reaction to Gigli hadn't happened, I probably wouldn't have ultimately decided, 'I don't really have any other avenue but to direct movies,' which has turned out to be the real love of my professional life," Ben Affleck tells Matt Damon in EW's current cover story. "So in those ways, it's a gift. And I did get to meet Jennifer [Lopez], the relationship with whom has been really meaningful to me in my life."
CELEBRITIES・14 DAYS AGO
In Style

Jennifer Lopez has offered her take on bohemian style. The singer, whose outfits typically lean more glamorous than free-spirited, stepped out yesterday in a boho-chic look that was still undeniably J.Lo. For a daytime outing with her 13-year-old daughter Emme in Los Angeles, Lopez wore a patchwork denim maxi skirt...
CELEBRITIES・9 DAYS AGO
Popculture

Jennifer Lopez may be dating her former love Ben Affleck at the moment, but she was previously in a serious relationship with Marc Anthony. After seven years of marriage, the pair, who share twins Max and Emme, broke up. What went wrong? During an interview with W Magazine, Lopez explained that she suffers from panic attacks. She shared that this anxiety led her to determine that she should part ways from Anthony, whom she split from in 2011.
CELEBRITIES・2 DAYS AGO

Ben Affleck and Jennifer Lopez Are 'Madly in Love' and an Engagement Is Coming, Source Says

Jennifer Lopez and Ben Affleck’s love is still real!. "Jen and Ben are doing great. Ben's interview with Howard Stern didn't really put too much of a strain on their relationship. They understand that things like this happen sometimes, and words can get misconstrued,” a source tells ET about the couple, who rekindled their romance in 2021.
BEAUTY & FASHION・5 DAYS AGO
EW.com

Ben Affleck, at the top of his game

It's one of those endless blue-haze days in Los Angeles, and Ben Affleck is leaning back on the diving board of a borrowed Bel Air estate to catch the sun, his long torso arced like a bell curve. For a moment it seems like he might actually fall in, bringing a precariously perched photographer and several yards of creamy, expensive-looking knitwear with him. But his balance is better than it looks: Affleck, 49, has walked the plank many times before, and tumbled from greater heights than this. He's also climbed back up again, a story of outsize stardom and second chances played out in the public eye for nearly three decades now.
CELEBRITIES・14 DAYS AGO
wmagazine.com

At this point, the winter season is well underway and trends are, for the most part, set. Most likely, leather, knit wear, and baggy jeans are taking over your Instagram feeds as well as the city streets, but Jennifer Lopez is here to suggest another clothing item to add to your winter closet: a jean maxi skirt. The multi-hyphenate cannot stop wearing them, having donned two separate jean maxi skirts in just two days, creating a trend all on her own.
BEAUTY & FASHION・7 DAYS AGO
Elle

Ben Affleck and Jennifer Lopez's rekindled romance may take a major step forward this year. A source told Entertainment Tonight that things between Bennifer are going so well that their friends are convinced Affleck will definitely be proposing at some point. The source noted that following Affleck's Howard Stern interview...
CELEBRITIES・4 DAYS AGO
Laredo Morning Times

Ben Affleck revealed to Entertainment Weekly in a recent interview that close friend and film collaborator Matt Damon played a key role in getting him to reshape his career following the rock bottom experience of working on “Justice League.”. Affleck called Damon “a principal influence” on his decision to...
MOVIES・13 DAYS AGO
toofab.com

"It's just that it became a story in and of itself. The funny name, the Jennifer Lopez romance and overexposure of that, it was kind of a perfect storm," Affleck recalled to Damon. Ben Affleck is reflecting on working on the 2003 romantic comedy "Gigli" alongside Jennifer Lopez, as well...
CELEBRITIES・14 DAYS AGO
Den of Geek

Why Ben Affleck Was Nixed as Superman

While Ben Affleck cemented his cinematic status as Batman in Warner’s DC Extended Universe, he experienced an interesting path to A-list comic book movie stardom. The actor famously starred in the widely-panned 2003 Marvel movie, Daredevil, and just a few years later, would even appear onscreen wearing a Superman costume in 2006’s Hollywoodland, a biopic about 1950s Superman actor George Reeves. However, that was all preceded by a moment in which Affleck’s name was dangled to play Superman properly under the screenwriting auspices of pal and repertory collaborator Kevin Smith. Unfortunately, that opportunity crumbled as quickly as a china shop hosting a Kryptonian street fight.
MOVIES・14 DAYS AGO