'Recovery mode ON': Paul Pogba shares photos from his rehab in Dubai as he fights back from a thigh injury, while agent Mino Raiola stokes the fire over a Man United exit

Paul Pogba has given fans a glimpse into his rehab programme in Dubai as he looks to return stronger after suffering a thigh injury.

The Manchester United midfielder is currently on a warm weather training camp after hurting himself while on international duty with France earlier this month.

Pogba took to Instagram on Wednesday to provide an insight on his progress as he battles back to full fitness, having been ruled out for at least six weeks. 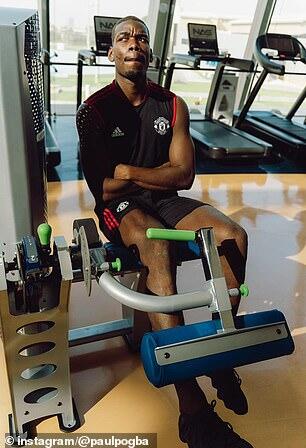 Accompanied with the caption: 'Recovery mode ON', Pogba shared two photos of himself - with the second one showing him working out on a leg extension machine.

Pogba has travelled to Dubai with a coach who is keeping a close eye on his progress.

The midfielder is determined to return stronger than ever from his injury as he aims to play a key role for United during the second half of the season.

Pogba is likely to miss the rest of 2021 but is working hard to return as soon as possible.

He started the season in excellent form for United, registering seven assists in their first four Premier League matches.

The games Pogba could miss

However, his performances have tailed off as Ole Gunnar Solskjaer's team also slumped and his career at the club reached a fresh low when he was sent off for a poor tackle on Naby Keita during the 5-0 home defeat to Liverpool.

He was then taken off early by Solskjaer during a disappointing performance in the 2-2 draw away to Atalanta in the Champions League.

The Frenchman's contract expires at the end of the season, meaning Pogba would be able to sign an agreement to join another club this January.

On Wednesday, his agent Mino Raiola dropped the strongest hint yet the midfielder could leave United, declaring 'December is the month of dreams.'

Raiola again stirred up speculation as he made cryptic remarks in an interview with Italian channel Rai.

He said: 'December is the month of dreams… and I can't stop dreams, but it is better to not speak about Paul.

'If some former Man United players don't speak about me and Paul, they won't work anymore.

'It's too early to speak about Paul Pogba's contract. Let's see what happens. I can't stop anyone from dreaming.'

Ralf Rangnick has no concerns about selecting Paul Pogba during the final months of his Manchester United contract, even if the midfielder’s only motivation to play well is to earn a deal at another club.Pogba has entered the final six month of his current Old Trafford terms, with little progress made in discussions over a renewal and a departure on a free transfer in the summer considered likely.The 28-year-old is yet to make an appearance under interim manager Rangnick after suffering a thigh injury while on international duty in November, though returned to full training on Monday.Rangnick expects Pogba...
PREMIER LEAGUE・2 DAYS AGO
The Independent

Ralf Rangnick considers the issue with Anthony Martial “resolved” following talks with a player he claimed refused to be involved in Manchester United’s trip to Aston VillaUnited had two goalkeepers among their eight substitutes – one short of the number allowed – for Saturday’s 2-2 draw at Villa Park where the France international was conspicuous by his absence.Martial has made no secret of his desire to leave United this month but Rangnick’s claim that the forward “didn’t want to be in the squad” in Birmingham still shocked onlookers.The 26-year-old took to Instagram later that night to say he “will...
PREMIER LEAGUE・2 DAYS AGO

Ralf Rangnick says Paul Pogba will be determined to return with a bang for Manchester United and suggested the chance to earn a new deal elsewhere could even form part of his motivation. Having left for Juventus in 2012 and rejoined for a then world record fee four years later,...
PREMIER LEAGUE・2 DAYS AGO
The Guardian

Manchester United rode their luck in the first half, but were ruthless in the second to continue their push for the top four
PREMIER LEAGUE・1 DAY AGO
goal.com

When will Paul Pogba be back for Man Utd? Red Devils star's absence explained

Manchester United interim boss Ralf Rangnick has said he expects Paul Pogba to be motivated to find his best form when he returns to the side “even if it’s only to show enough for a new contract elsewhere.”. Rangnick said he intends to pick Pogba once he fully...
PREMIER LEAGUE・1 DAY AGO

Manchester United look set to be without Aaron Wan-Bissaka until after the upcoming international break due to illness.The defender missed Saturday’s 2-2 draw with Aston Villa and United interim boss Ralf Rangnick revealed he was also ruled out of Wednesday’s match at Brentford and would likely be unavailable for the home clash with West Ham three days later.Asked if Wan-Bissaka would be fit to face Brentford, Rangnick told MUTV: “No, not yet. He’s still ill, I’m afraid. He will not be available for the game (on Wednesday) and also probably not available for the West Ham game.“Hopefully, after the international break, he will be back for training.”After the break that follows the West Ham fixture, United are scheduled to be back in action on February 4 with an FA Cup tie at home to Middlesbrough.
SOCCER・1 DAY AGO
The Guardian

Ralf Rangnick must be 'careful' in ensuring Cristiano Ronaldo remains on side, warns Owen Hargreaves - after Manchester United star was substituted during 3-1 Brentford win

Owen Hargreaves has warned Ralf Rangnick of his management style with Cristiano Ronaldo following Manchester United's 3-1 win at Brentford on Wednesday night. With the Red Devils 2-0 in front, Rangnick decided to substitute Ronaldo in the 71st minute - much to the Portuguese superstar's visible frustration. Rangnick tried to...
PREMIER LEAGUE・7 HOURS AGO
The Independent

Four of the FA WSL’s top five teams will contest the semi-finals of the Continental Cup with Manchester City, Manchester United, Tottenham and Chelsea all progressing.League leaders Arsenal were knocked out by third-placed Manchester United courtesy of Alessia Russo’s 85th-minute header.The impressive victory continued United’s fine form, meaning they have now won five games in a row in all competitions without conceding.Pernille Harder scored a hat-trick as Chelsea cruised to a 4-2 win over West Ham.The Denmark international opened the scoring for the visitors after 25 minutes only for Katerina Svitkova to equalise before half-time.However, three goals in nine second-half...
PREMIER LEAGUE・1 DAY AGO

Paul Pogba has reportedly informed Manchester United that he wants to join Real Madrid in the summer. Pogba is out of contract at the end of the season and is expected to leave on a free transfer, six years after rejoining United from Juventus for a then world-record fee of £89m.
PREMIER LEAGUE・1 DAY AGO
The Independent

Was this the attitude Cristiano Ronaldo demanded?Whatever about refusing to accept criticism, Manchester United’s new generation refused to accept anything other than victory.It was certainly the response, and the result, Ralf Rangnick and his team needed.On a night when they were often second best to Brentford, and mere days after Ronaldo gave such a pointed interview about the attitude of younger players, three of the club’s youth graduates scored to secure a crucial 3-1 win in the race for fourth. The table looks that bit better for United. The mood is that bit improved.That’s the spirit of youth, that feels...
PREMIER LEAGUE・1 DAY AGO
The Independent

What the papers sayCristiano Ronaldo could be set to leave Manchester United after just one season back at Old Trafford. The Sun reports Ronaldo’s representatives have told the club that failure to qualify for next season’s Champions League would prompt the 36-year-old to look for an exit.The same paper writes that Tottenham defender Japhet Tanganga is a target for AC Milan. Spurs would reportedly be willing to sell the 22-year-old for £21million, but the Serie A title challengers are said to prefer a loan deal.Arsenal have received a loan offer for former captain Pierre-Emerick Aubameyang from Saudi Arabian team Al-Nassr,...
PREMIER LEAGUE・17 HOURS AGO
The Independent

As the Manchester United players celebrated Marcus Rashford’s goal, and Cristiano Ronaldo remained looking rather sullen, Ralf Rangnick felt he’d better have a little word with his main star.“I understand you are ambitious and want more goals,” the German told Ronaldo, “but maybe in a few years when you are a head coach you will realise”.These words are no great secret uncovered. Rangnick offered them up himself after the game.For all the issues that United’s interim coach has had in his first two months, his frankness is to be appreciated. He has no problem telling it as it is, as...
PREMIER LEAGUE・12 HOURS AGO
NBC Sports

Paul Pogba is close to a return for Manchester United, as the French superstar has been out since early November with a thigh injury. Pogba, 28, is out of contract at Old Trafford this summer but the option of a new deal at United is still thought to be on the table.
PREMIER LEAGUE・2 DAYS AGO
The US Sun

Paul Pogba will get back to his best for Man Utd… even if it’s just to seal big transfer elsewhere, says Ralf Rangnick

RALF RANGNICK believes we are about to see the best of Paul Pogba — because he wants to shine in the shop window. The Manchester United star returned to full training this week for the first time since picking up a thigh injury while on France duty in early November.
PREMIER LEAGUE・2 DAYS AGO
Daily Mail

Cristiano Ronaldo's tantrums have become a needless distraction, game plans have to revolve around him and he may well be stifling Fernandes but Man United would be out the Champions League if not for his goals... so are they better with or without him?

It should have been a wholly positive evening for Manchester United. Having ridden their luck at times, their attackers had sliced through Brentford to score three eye-catching goals and take three important points. Improbably given all their recent issues, Ralf Rangnick's side could finish the weekend in fourth place if...
PREMIER LEAGUE・5 HOURS AGO