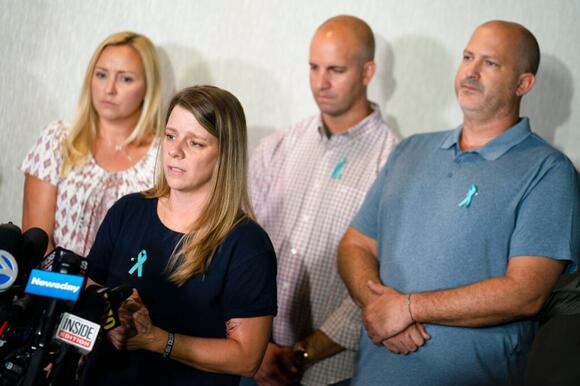 TAMPA, Fla. (WFLA) — This week marks two months since Gabby Petito’s body was found near Grand Teton National Park in Wyoming, just about a week after she was reported missing by family members concerned that her fiancé returned home without her from a cross-country road trip.

The disappearance and death of Petito garnered international attention, as well as an outpouring of support for family members of the 22-year-old. On Tuesday, Petito’s family spoke exclusively with WFLA Now about the support they’ve received and what they’re doing to help grieve their beloved daughter.

“It’s hard. We’re still grieving and it’s going to be a process for a long time, I know that. I think starting the foundation is a way of us grieving and getting through this,” Nichole Schmidt said. “Some mornings I wake up, I want to save the world and I know I can’t do that but I’ll die trying. And that’s Gabby’s legacy.”

Schmidt joined WFLA Now from Long Island, where she and Petito’s stepfather Jim Schmidt live. Petito grew up in Long Island but moved to North Port about two years ago to live with her fiancé Brian Laundrie and his family.

Petito’s father Joe Petito and stepmother Tara Petito also live in Florida, and joined the conversation Tuesday from their home in Vero Beach.

“I cry every night. I stare at her pictures. So it’s been very difficult,” Tara Petito said of the grieving process. “I have a 13-year-old son who was very close with Gabby and he’s having a very tough time as well.”

Joe Petito said the family has tried to stay focused and put their energy toward the foundation they started in honor of their late daughter.

“That’s been our driving force as of late and it’s going to do a lot of good things,” he said. “Doing that, staying focused, researching – that’s what we’re doing in terms of trying to cope. Trying to make a difference.”

What happened to Gabby Petito? Timeline of disappearance and death

Since Gabby Petito’s death, social media users have flooded various platforms with messages about “Justice for Gabby.” Her parents on Tuesday said justice for them is looking forward and making the world a better place.

“If we can save just one person – that would be justice,” Tara Petito said. “Just going forward, that’s really what we would like to do. To save – or help her story get there so people know that we care.”

“If we can try and make that change, that’s what we’re trying to do here. And that’s justice for me – helping others,” Schmidt added. “It’s about the changes we can make. We can’t change the past but we can change the future.”

The Gabby Petito Foundation launched in late September, shortly after federal officials confirmed Petito’s death. Since the Petito and Schmidt families started posting about the foundation, people from all over the world have reached out to find out how they can get involved.

“We have the foundation website up … there’s a donation button there – you can definitely click that and donate… we are going to schedule more and more fundraising events for the foundation,” Joe Petito explained. “Remember, we’re only 30 days in. We’re still learning processes and stuff to make sure everything’s done the right way. We’re gonna continue trying to fill gaps and voids where help is needed. The more we learn, the more we can help. The more we can help, the better things will be.”

Schmidt said the family has been meeting with experts from all over the country to learn more about what changes should be made in the wake of their daughter’s death. Joe Petito said they’ve spoken with shelters, police, rescue teams, therapists and other professionals to find out what resources are needed most.

“Being able to fill that void with whatever we can do, that’s what we’re trying to do. We’re trying to help other organizations with resources and bring awareness to the issues,” he said.

The parents added that the foundation is also focusing on education.

“We are working with people out there that work with prevention education. Trying to get it into schools would be our number one goal,” Schmidt said. “From a very young age on, I think prevention education will help prevent us from needing all these shelters some day. We have to start while they’re young and – it’s not in schools, unfortunately. And it needs to be.”

She added that the family has discussed potential national alert systems for people in the 18 to 64 age range.

“There’s nothing for that age group. It would be just like the Amber Alert or the Silver Alert but it’s a different age group,” she said. “We hope to bring that kind of change to missing persons.”

Joe Petito noted that, while he’s been vocal and active on social media, he doesn’t want the spotlight on himself. He wants the spotlight on other people who are missing across the country.

“I want to see everyone have the same type of help that we received,” he said. “And if that takes me for that to push that out there asking for help to find missing people, by all means I’ll do that. I’d be doing a disservice to the people by not doing that. I want to make sure Gabby’s looking down saying, ‘I’m proud.'”

BRENTWOOD, Long Island (PIX11) — A high school senior from Minnesota, who went missing from her grandmother’s house 12 days ago, was discovered at a Brentwood, Long Island home more than 1,200 miles away — staying with a boyfriend she met online. Amelia Krulikosky, 18,  finally Facetimed her parents, just as Suffolk County police arrived […]
BRENTWOOD, NY・1 DAY AGO
PIX11

MARINE PARK, Brooklyn — A woman spat on an 8-year-old boy multiple times Jan. 14 after harassing him and two other children, police said Tuesday. At about 12:35 p.m. the woman approached the three children, who were walking on Avenue P in Marine Park. Police said she made anti-Jewish statements before spitting on one of […]
BROOKLYN, NY・2 DAYS AGO
Vice

The Cops Now Think Gabby Petito Should Have Been Arrested

The Utah officers who pulled over Gabby Petito and her fiancé, Brian Laundrie, nearly two weeks before she was last seen made several mistakes during their encounter, an independent investigation has found. First, they should have arrested Petito when she admitted to hitting Laundrie—even though a 911 caller reported...
MOAB, UT・7 DAYS AGO

The Officers Who Investigated Gabby Petito And Brian Laundrie Before Her Death Should Be Placed On Probation, An Independent Review Found

The police officers who investigated a domestic dispute between Gabby Petito and her fiancé shortly before her death made several mistakes and should be placed on probation, according to an independent review released Wednesday. The report found that the two Moab police officers who contacted Petito and Brian Laundrie...
PUBLIC SAFETY・7 DAYS AGO
Outsider.com

Price Police Department authorities have released their independent report on the Moab, Utah Police Department’s August 2021 traffic stop of Gabby Petito and Brian Laundrie. They opened an investigation into the incident after an attorney filed a formal complaint over how it was handled. The outside investigation found that...
MOAB, UT・7 DAYS AGO
Insider

"If this case was handled flawlessly, would it have changed anything? Nobody knows," the report said, adding that "mistakes were made."
MOAB, UT・7 DAYS AGO
CBS New York

NEW YORK (CBSNewYork) — A new report says two police officers who stopped Gabby Petito and Brian Laundrie last year in Utah should be put on probation. Petito and Laundrie were on a cross-country road trip and traveled through Utah last August. That’s where a witness told police he saw the couple involved in a domestic dispute. Police body camera video showed Petito say she struck her fiancé first. The officers eventually agreed not to charge her. An independent investigative report says the officers neglected their duty by failing to press charges. Petito was later found strangled. In October, Laundrie was also found dead of a self-inflicted gunshot wound.
UTAH STATE・7 DAYS AGO

Utah officer who responded to Gabby Petito incident said he

MOAB CITY, Utah -- An investigation into a domestic violence incident involving Gabby Petito and Brian Laundrie in Utah back in August is now complete. The 102-page report, made by independent law enforcement agency, found that the Moab City Police officers who responded to the incident on August 12, made several "unintentional mistakes," including not citing Petito for domestic violence.
MOAB, UT・7 DAYS AGO
WFLA

According to News Nation's Brian Entin, Petito's parents met with the FBI in Tampa, however, the reason for the meeting remains secret. Entin reports property including Brian's notebook has been agreed to.
TAMPA, FL・5 HOURS AGO
wflx.com

The parents of fugitive Gabby Petito have reached an arrangement with the family of Brian Laundrie over their daughter's possessions and the notebook of the late fugitive. On Thursday, Steven Bertolino, the Laundrie family's attorney, verified the news. According to Bertolino, "an agreement between the families in relation to property...
PUBLIC SAFETY・1 HOUR AGO
fox13news.com

TAMPA, Fla. - The family of Gabby Petito was in Florida on Thursday morning, roughly four months after their daughter was found strangled to death in Wyoming, Fox News Digital has learned, as an attorney representing her fiance's loved ones says they have reached an agreement about how the couple’s property will be distributed.
TAMPA, FL・6 HOURS AGO
Newsweek

The FBI investigation into Petito's death remains ongoing, though Laundrie hasn't yet been charged for it.
FAMILY RELATIONSHIPS・1 HOUR AGO
WCVB

MANCHESTER, N.H. — The adoptive fathers of Harmony Montgomery's brother spoke Saturday on ABC's Good Morning America in hopes that someone will come forward with new information about the missing girl. Blair and Johnathon Miller said their adoptive son Jamison spent time in foster care with Harmony Montgomery, his...
MASSACHUSETTS STATE・4 DAYS AGO

Police made ‘unintentional mistakes’ with Gabby Petito, boyfriend before she was killed

SALT LAKE CITY (AP) — An investigation has found that Utah police made “several unintentional mistakes” when they stopped Gabby Petito and her boyfriend before she was killed in what became a high-profile missing person case. The independent report released Wednesday examines a stop by police in...
SALT LAKE CITY, UT・7 DAYS AGO
fox40jackson.com

Moab authorities released a report Wednesday on the independent investigation into their police department’s handling of the Aug. 12 domestic call involving Gabby Petito and Brian Laundrie – which resulted in no arrests despite Utah state law mandating an arrest or citation in domestic violence incidents. The investigation...
PUBLIC SAFETY・7 DAYS AGO
The Independent

Gabby Petito’s parents have struck a “distribution of property” deal with the Laundrie family to get their daughter’s belongings back once they are released by the FBI.Ms Petito’s personal items left at the Florida home of Christopher and Roberta Laundrie and seized by the FBI after her disappearance will be handed back to her parents, Laundrie family attorney Steven Bertolino said in a statement. “An agreement in principle with respect to the distribution of property between the two families has been reached.“I have no further comment at this time.”It came as Ms Petito’s parents met with the FBI in...
RELATIONSHIPS・2 HOURS AGO
wccbcharlotte.com

Could An Arrest Have Saved Gabby Petito’s Life? An Independent Investigation Suggests Yes

CHARLOTTE, N.C. – Gabby Petito should have been arrested. That’s the headline from an independent investigation into the Petito case. The report recommends that the officers who stopped Petito and Brian Laundrie last year in Utah, should be put on probation for not arresting Petito. Originally, an officer...
CHARLOTTE, NC・6 DAYS AGO