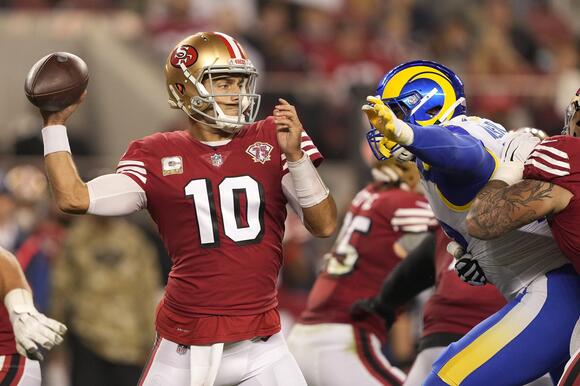 After watching game tapes of the Jaguars, San Francisco 49ers quarterback Jimmy Garoppolo said he could not help but notice a particular defender that seemed like he was always around the ball.

That player was Jaguars outside linebacker Josh Allen , and Garoppolo regards him highly going into Sunday's game at TIAA Bank Field.

"He's a hell of a player, man," Garoppolo said. "He really is. They've got a lot of speed on that defense from sideline to sideline, but just Josh, he's impressive. You saw he did in the Buffalo game and did it against the Colts too. So, it'll be a challenge for us."

Allen has combined for 10 tackles in the past two games and leads the Jaguars with 5.5 sacks. He had 2.5 sacks in eight games last season.

The 49ers considered drafting Josh Allen with the second overall pick in the 2019 NFL Draft but selected Nick Bosa instead. Allen went seventh overall by the Jaguars.

''He (Allen) fit because when we were up there trying to look for pass rushers, and we felt pretty strong about the two top ones in the draft with him and the guy we ended up getting [DL] Nick [Bosa],'' 49ers coach Kyle Shanahan said.  ''We were real high on Josh, but we were a little higher on Nick.”

How to watch: Jacksonville Jaguars vs. San Francisco 49ers on TV, live stream 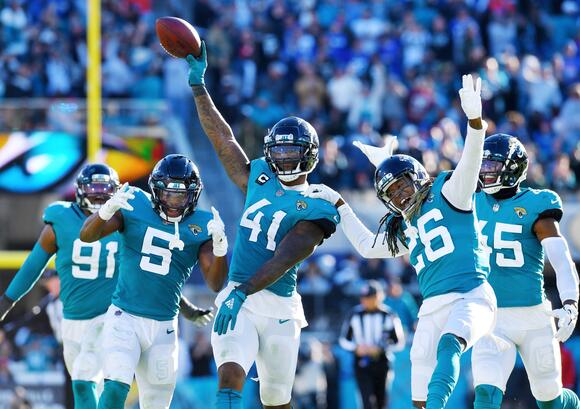 Shanahan expects his players to carry over the urgency and not overlook the Jaguars on a short week after playing Monday night against the Los Angeles Rams.

''It’s pretty easy when you start watching the tape not to overlook them,'' Shanahan said. ''You talk as a coach, you read the numbers, but when you watch the tape, they’ll see, as they’ve seen today, this morning that they’re a good team and they’re getting a lot better.''

''I don’t think that people let down after something like that, but you’ve got to realize the emotions that go into a Monday night game is a little bit bigger where we were coming from with how bad we had played before that, so the emotions were high.''

The San Francisco 49ers lead the all-time series against the Jaguars 3-2, including winning the last three games. San Francisco has not played Jacksonville since 2017 when they won 44-33 at Levi Stadium.

Better on road than home

The 49ers have proven to perform better on the road than at home. They have won three of four road games but have fared 1-4  at home with their first victory of the season at Levi Stadium this past Monday against the Rams 31-10.

Tight end George Kittle has the second-most receiving yardage (3,957) among tight ends since 2017. Kittle only trails Kansas City's Travis Kelce, who has 5,766 yards. After nine games this season, Kittle ranks fifth in the NFL with 202 yards after the catch and 11th with 378 receiving yards. Kittle's 30 catches ranks 15th.

The Kansas City Chiefs officially booked their ticket to a rematch with Josh Allen and the Buffalo Bills in the Divisional Round after blowing out the Pittsburgh Steelers on Sunday. As we all know, Patrick Mahomes and Co. beat the Bills 38-24 last season in the AFC title game and...
NFL・2 DAYS AGO
Acme Packing Company

49ers QB Jimmy Garoppolo may not start vs Packers, per report

According to Fox Sports 1’s Jason McIntyre, San Francisco 49ers quarterback Jimmy Garoppolo’s injury may be a bigger cause for concern than most realize. McIntyre tweeted that Garoppolo’s hand and shoulder injuries are “Not good. Like may not start good.”. As he noted, the betting line...
NFL・1 DAY AGO
Sports Illustrated

The penalty on the QB sneak gave the Cowboys the ball back with a chance to win.
NFL・1 DAY AGO
Chicago Tribune

If the Chicago Bears were intent on doing comprehensive research for their simultaneous searches for a new head coach and general manager, perhaps their Saturday night homework should have ended with a peek into the interview rooms at Highmark Stadium in Orchard Park, N.Y. Start with Bill Belichick. Legendary coach of the New England Patriots. Defensive mastermind. Six-time Super Bowl winner. ...
NFL・2 DAYS AGO

49ers QB Jimmy Garoppolo sounds off ahead of showdown vs. Aaron Rodgers, Packers

The San Francisco 49ers outlasted the Dallas Cowboys in a bizarre Wild Card Weekend affair. But things don’t get any easier for Jimmy Garoppolo and Co. as they set themselves up for a date with the Green Bay Packers. The 49ers quarterback was vocal on how they can carry...
NFL・2 DAYS AGO
Sportsnaut

San Francisco 49ers quarterback Jimmy Garoppolo committed multiple miscues during Sunday's 23-17 postseason win at the Dallas Cowboys but seemed to ice the game away in the final minute via a fourth-down sneak that gained enough yards for a fresh set of downs. However, offensive tackle Trent Williams was correctly flagged for a false start, and that penalty gifted the Cowboys a final offensive possession they ultimately squandered.
NFL・2 DAYS AGO
ClutchPoints

Jimmy Garoppolo just can’t catch a break from injuries. After enduring a thumb issue in recent games, the San Francisco 49ers quarterback is now dealing with a shoulder sprain. Although minor, it comes as they prepare to take on the Green Bay Packers in the Divisional Round. Garoppolo sustained...
NFL・2 DAYS AGO

The San Francisco 49ers handed the Dallas Cowboys yet another disappointing playoff loss on Sunday as they now look ahead to a matchup with Aaron Rodgers and the Green Bay Packers. Quarterback Jimmy Garoppolo continues to battle a nagging thumb injury though, which certainly bothered him in the win over Dallas.
NFL・2 DAYS AGO
Sportsnaut

The 2021 NFL regular season is over and playoffs are in full swing, which brings us to one of our
NFL・4 HOURS AGO
Sportsnaut

49ers quarterback Jimmy Garoppolo struggled and made key mistakes in Sunday’s 23-17 Wild Card win over the Dallas Cowboys, but got bailed out by the team’s defense.
NFL・2 DAYS AGO
WEEI Sports Radio

Making his weekly appearance on The Greg Hill Show, Boomer Esiason said the New England Patriots have “a Josh Allen problem” and need to prioritize getting faster on defense this offseason.
NFL・2 DAYS AGO
ABC30 Fresno

Postseason QB power rankings: Can 49ers, Jimmy Garoppolo, change narrative that only the elite rule in the playoffs?

The most important position in professional sports becomes even more important in the postseason. That much was clear on wild-card weekend, where the team with the best quarterback wound up advancing to this week’s final eight in just about every instance. Four were gigantic mismatches — Tampa Bay and...
NFL・1 DAY AGO

Jimmy Garoppolo is dealing with another injury as the 49ers continue their pursuit of a Super Bowl title. San Francisco coach Kyle Shanahan told reporters Monday that Garoppolo suffered a “slight” sprain of his right (throwing) shoulder during the second quarter of the 49ers’ 23-17 victory over the Cowboys in the NFC wild-card round.
NFL・1 DAY AGO
Sportsnaut

The NFL MVP odds have received their final update now that the 2021-22 NFL regular season is in the books.
NFL・6 HOURS AGO
Inside The Knights

With his big touchdown catch against the New England Patriots, Gabriel Davis is becoming a big-time target for quarterback Josh Allen.
NFL・2 DAYS AGO
FanSided

Ahead of Saturday night’s divisional-round game against the Green Bay Packers, San Francisco 49ers quarterback Jimmy Garoppolo is dealing with thumb and shoulder injuries. To this point, Garoppolo has played through a thumb injury but suffered a shoulder injury in the 49ers’ win over the Dallas Cowboys on Sunday.
NFL・1 DAY AGO