Tessica Brown Says She Reached Out To Nicki Minaj To Collab On Her New Single ‘Ma Hair’, But She Got Left On Read 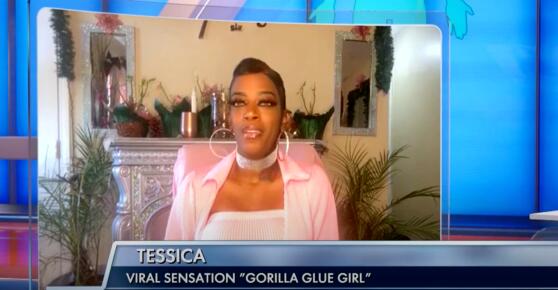 Well, It looks like Tessica Brown, who’s infamously dubbed “Gorilla Glue Girl,” is venturing into the world of music with the release of her new single “Ma Hair,” which is set to drop on Nov. 19.

Brown skyrocketed to social media fame, albeit in a rather unconventional way, back in February after she took to TikTok to ask for some advice on how to remove the powerful epoxy sealant from her hair . The Lousiana native thought she could use Gorilla Glue as a quick fix to slick back her edges after she ran out of her usual “Got 2b Glued” hairspray. While the incident was certainly scary, things didn’t turn out too bad for Brown in the end. The star has since launched her own hair care line called Forever Hair and she also has a thriving merch business.

It looks like her foray into the music world is another way of helping to secure her social media empire. TMZ reported that Brown flew out to LA to record her new track with the help of independent music producer and engineer Phil Valley. According to the outlet, Brown wrote the new jam all by herself, and her team even reached out to Nicki Minaj to lend a few bars to the song , but the “Pink Friday’ rhymer doesn’t appear to be too interested as she has yet to respond back.

The collab was proposed by Brown’s management team after Minaj dropped a reference about her Gorilla Glue mishap in her recent song titled “Fractions.”

During an interview with ET back in February, Brown told fans that she was bothered by the negative chatter that was stirring across social media following the incident. Some keyboard critics thought that she had purposely glued her tresses all for a little internet “clout,” but that truly wasn’t the case, according to the busy daycare founder.

“If y’all knew me, y’all know I would never, ever do anything for clout,” Brown said. “If y’all knew me, y’all would love me. Everything that y’all saying, call me, talk to me. I will talk to you. I really would talk to a lot of people. I’m not that person y’all trying to make me out to be,” she expressed before sharing what she’s learned from the experience. “Go to the salon. Or if you don’t have what you need, don’t just use anything. It’s really not that serious.”

“I’m not this whole Gorilla Glue girl, my name is Tessica Brown,” she added. “Call me. I’ll talk to you. I’ll let you know exactly who I am.”

A lawsuit for harassment against pop star Nicki Minaj is to be refiled according to the accuser’s lawyer. Earlier this month, Minaj was dropped from a lawsuit originally filed against her and her husband Kenneth Petty for harassment. Jennifer Hough accused Petty of sexual assault in 1994 and filed...
CELEBRITIES・6 DAYS AGO
thesource.com

Nicki Minaj officially makes her official return to the throne on Friday, Feb. 4. On Wednesday, the Queen rapper took to social media and almost broke the internet with the announcement of her latest single, “Do We Have a Problem? She added more heat to the flame of anticipation when fans saw that the track would feature Lil Baby.
MUSIC・14 HOURS AGO
thatgrapejuice.net

Just days after word first began circulating Nicki Minaj was cooking up a comeback single with Lil Baby, the rapstress took to Instagram to surprise her 172 million followers with news the rumors were true. Taking to IG Wednesday night (January 26), Minaj posted what appeared to be a still...
CELEBRITIES・20 HOURS AGO

The Queen is back
CELEBRITIES・11 HOURS AGO
POPSUGAR

Nicki Minaj and Lil Baby Are Releasing a New Song Together

Nicki Minaj is breaking her music hiatus to release a new single with Lil Baby. On Jan. 26, the rapper teased their upcoming collaboration with a photo of the two from what looks like an unreleased music video, tweeting "DO WE HAVE A PROBLEM!? "BABY X BARBIE PINK FRIDAY FEB. 4." The title of the song has yet to be revealed, but it's set to drop next Friday.
CELEBRITIES・8 HOURS AGO
Ok Magazine

Janelle Brown has been reflecting on her relationship with Kody Brown. In the latest episode of Sister Wives, Janelle spoke to Robyn about the growing tension in the family, as they've been clashing over Kody's strict guidelines amid the COVID-19 pandemic. Robyn admitted to Janelle during the Sunday, January 16,...
RELATIONSHIPS・10 DAYS AGO
Insider

Kanye West told Hollywood Uncovered that he's decided not to tweet and overshare about his divorce from Kim Kardashian.
CELEBRITIES・2 DAYS AGO

Ever since they began dating in 2013, socialite Lauren Silverman has made her fiancé, Simon Cowell, feel like one lucky guy! Although fans never imagined it would happen, the beloved TV star found his one true love and has been living a life of bliss ever since. In January...
CELEBRITIES・15 DAYS AGO
The Independent

An individual has called out a lounge after they were denied entry because they were wearing a skirt and not “dressing his gender”.Pako Zolanski, 25, who goes by the username @pakozolanski on TikTok, recently uploaded a video taken outside of Monticello ATL, a lounge in Marietta, Georgia, where they had gone to celebrate a friend’s birthday.However, in the clip, a manager for the lounge can be seen explaining why the 25-year-old, who uses he/she/they pronouns, according to their TikTok bio, would not be allowed inside.“Let me explain. It’s just like when you go to some places, they say: ‘We can...
BEHIND VIRAL VIDEOS・1 DAY AGO
StyleCaster

2022 is already off to the weirdest start of all time, and while I’m mourning multiple celebrity deaths, there’s at least a little something to celebrate in terms of Hollywood People I Follow On Instagram: Megan Fox and Machine Gun Kelly are engaged! And of course, Megan Fox’s ring is absolutely breathtaking, not to mention a fun pop of color. While her two-stone ring is sparkly and stunning, I can’t say it’s all that unique—Toi et Moi settings are a top engagement ring trend this year, with celebs like Ariana Grande, Emily Ratajkowski and more in love with the look....
CELEBRITIES・15 DAYS AGO
The Independent

YouTuber and crafter Melanie Ham, who was well-known for the stories about her art and personal life she shared on social media, has died at the age of 36.According to posts shared to her social media accounts, which were published by her husband Robert Ham, Ham passed away from cancer on 12 January.“It is with a heavy heart and deep sadness I share the news of the passing of my sweet, amazing, beautiful wife Melanie,” the caption of the Instagram post reads. “If you’ve been following our journey I’m sure you were, like us, hopeful she could defeat this...
CELEBRITIES・1 DAY AGO

I honestly hate how interested I am in the Kardashian family relationship dynamics these days. Mainly, the breakdown of Kimye. Kim Kardashian and Kanye West have been going through a highly publicized divorce, and saying that there have been ups and downs is putting it lightly. Kanye, who legally changed his name to Ye, has […] The post Julia Fox Denies Dating Kanye West For Fame And Money; Says She’s Dated Billionaires Her Whole Life appeared first on Reality Tea.
CELEBRITIES・2 DAYS AGO
The Independent

Kanye West has spoken about his disappointment with estranged wife Kim Kardashian over her decision to allow their daughter North to wear makeup and use TikTok.The rapper, 44, who shares children North, eight, Saint, six, Chicago, four, and Psalm, two, with the Keeping Up With The Kardashians star, discussed the couple’s co-parenting, and his belief that Kardashian has tried to “antagonise” him, during an interview with Jason Lee on Hollywood Unlocked.During the conversation, West explained that he recently asked two of his cousins to meet with Kardashian directly to discuss his two “directives,” one of which regarded his belief that...
CELEBRITIES・2 DAYS AGO
iHeartRadio

Ye has a lot to say.
CELEBRITIES・2 DAYS AGO
StyleCaster

Just days after debuting their romance, Kanye West and Julia Fox’s photos have been published following a photoshoot booked by the Yeezy founder himself. Kanye and Julia—who have sparked dating rumors since early January 2022—took their relationship public on January 6, 2022, with an exclusive photoshoot and feature in Interview Magazine. “I met Ye in Miami on New Year’s Eve and it was an instant connection. His energy is so fun to be around,” the Uncut Gems actress said of Kanye, who is in the midst of an ongoing divorce with Kim Kardashian. “He had me and my friends laughing, dancing...
NEW YORK CITY, NY・20 DAYS AGO
Distractify

While most people have a basic idea of who Hugh Hefner was and how his Playboy empire operated, the A&E docu-series Secrets of Playboy will shed a different light on the founder's legacy. Throughout the 10-part series, viewers will get to hear from some of Hef's former Playmate girlfriends, and...
RELATIONSHIPS・3 DAYS AGO
People

Machine Gun Kelly did not want to ask Megan Fox to be his wife with anything run-of-the-mill. Instead, the rocker helped design a two-stone ring with their one-of-a-kind love in mind. On Wednesday, the Born with Horns artist, 31, proposed to Fox after over a year of dating. Alongside his...
CELEBRITIES・15 DAYS AGO
Glamour

Britney Spears continues to take aim at her family, most recently in a new Instagram post where she outlines something that happened shortly after her breakup from Justin Timberlake. It's unclear what prompted this caption; perhaps it was Jamie Lynn talking about Britney's heartbreak post-"Cry Me a River" in a...
TV SHOWS・8 DAYS AGO
The Independent

A brand new Kanye West documentary shows footage of his mother warning him off becoming “too arrogant”.The controversial rapper’s career is profiled in a three-part series titled Jeen-Yuhs, which will be released on Netflix in February.Filled with footage of his rise from producer to successful rapper, and filmed in Chicago and New York, the documentary also focuses on West’s relationship with his mother, Donda.In a moment from 2001, West is visiting his mother in her Chicago home when he’s discussing his success after producing the Jay-Z song "Izzo (HOVA)".“I was thinking about something I was going to say to...
MUSIC・2 DAYS AGO