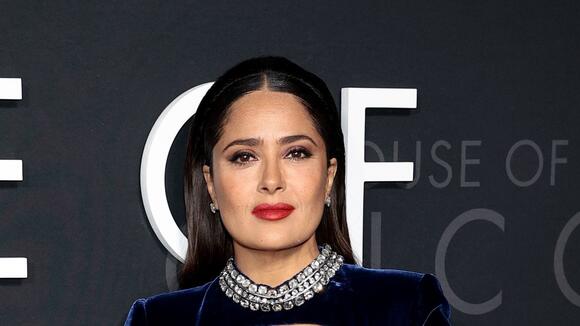 Salma Hayek is defying the laws of aging once again.

This time, she is turning heads on the red carpet.

The 55-year-old star stunned in a blue velvet cut-out Gucci gown that highlighted her curves. Hayek, the Academy Award-winner, attended the House of Gucci premiere in New York City, according to the Daily Mail.

On the carpet, photos showed that Hayek’s dress featured large rhinestones on the neck and wrists on her gown. 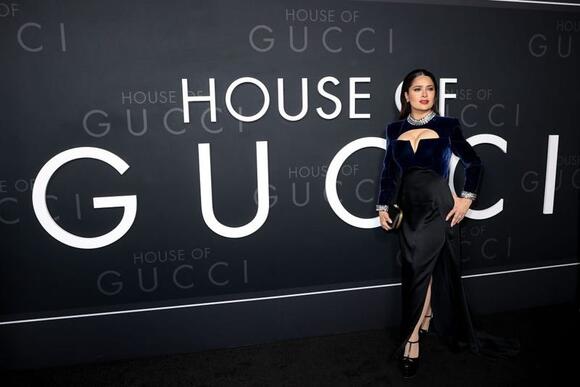 The bottom of the dress had a black, silky fabric that featured a slit up on one leg. To finish the look, she wore diamond studs and wore her hair down and tucked behind her ears.

Hayek isn’t shy when it comes to strutting on the red carpet.

In October, Hayek enjoyed some mother-daughter bonding as she attended the “Eternals” premiere with her 14-year-old daughter Valentina.

It was one of the most star-studded red carpets so far this fall film season -- for one of the year’s most anticipated films. Angelina Jolie , Hayek’s costar in the latest Marvel movie, " Eternals, " also made it a family night, bringing 5 of her 6 children to the gala.

Hayek walked down the carpet in a chic and plunging black dress with gold trim. Valentina was just as stylish, standing next to mom in a black minidress with white polka dots and black tights.

Hayek shares Valentina with her French billionaire husband, François-Henri Pinault. They married on Valentine’s Day in 2009, nearly two years after welcoming their daughter.

The internet is not short of swimsuit selfies, but Salma Hayek’s are a rare kind of #instamood. More motivational than thirst trap – although more on that later – Hayek and her leopard-print YSL halter-necks, azure-blue bathers and logoed Gucci cossies make a splash for all the right reasons. At 55, the silver-screen siren has made no secret that “the best time in my life is now”, and it shows in every viva la vida hashtag. She feels great and it radiates from within.
BEAUTY & FASHION・9 DAYS AGO
shefinds

While many of us rang in 2022 in the cold, Salma Hayek headed for a more tropical party setting. The Eternals star, 55, showed off her sun-kissed natural beauty in an Instagram post on New Year’s Eve. She rocked a black one-piece, halter-top swimsuit that hugged her hourglass figure (and made us all swoon)!
CELEBRITIES・10 DAYS AGO
EW.com

We could all use a friend like Salma Hayek. At least that's the takeaway from Penélope Cruz's latest sit-down with Ellen DeGeneres. The 355 and Parallel Mothers star opened up about her first foray into Los Angeles and how Hayek — whom she had only met over the phone — showed up for her in a big way.
CELEBRITIES・9 DAYS AGO
Audacy

We’re only a few days into 2022, but Salma Hayek is already making her mark. The 55-year-old actress put her incredible figure on display with in latest Instagram post set against the backdrop of a tropical paradise.
CELEBRITIES・12 DAYS AGO

Salma Hayek is entering the New Year with a re-brewed spirit. The 55-year-old actress took to Instagram on Monday to share her second post of 2022 and did so in opulent style — posing in a plunging, leopard-print one-piece swimsuit by Melissa Odabash and black cat-eye sunglasses by Saint Laurent.
CELEBRITIES・12 DAYS AGO
Harper's Bazaar

It looks like swimsuit selfies are becoming Salma Hayek's New Year tradition. On Monday, Hayek sent warm regards to her nearly 20 million followers on Instagram via her first vacation post of the year, just like she did at the start of 2021. The House of Gucci actress shared a photo of herself wearing a Saint Laurent leopard-print bathing suit with a low-cut halter neckline, complemented by black rectangular shades, a warm cup of coffee, and a scenic tropical view.
CELEBRITIES・11 DAYS AGO
Hello Magazine

Salma Hayek has received some very sad news following the success of her 2021 movie, Hitman's Wife's Bodyguard. It has been announced that Brandon Murphy, who co-wrote the action comedy, has tragically passed away at the age of 43. WATCH: Angelina Jolie helps Salma Hayek celebrate her birthday. Brandon died...
CELEBRITIES・3 DAYS AGO
KXLY

Penelope Cruz has praised Salma Hayek for giving her a place to stay when she first moved to Los Angeles. The 47-year-old actress has looked back on her years-long friendship with Salma, as she said the fellow Hollywood star was kind enough to picked her up from the airport when she landed in California for the first time.
CELEBRITIES・8 DAYS AGO

If you purchase an independently reviewed product or service through a link on our website, SheKnows may receive an affiliate commission. If anyone knows how to treat themselves to the fullest, it’s Salma Hayek. In a 2018 interview with the Skincare Edit, Hayek revealed her step-by-step skincare routine, like...
BEAUTY & FASHION・20 HOURS AGO
countryliving.com

After her holiday tour and opening performance at this year's Rose Parade, singer LeAnn Rimes isn't showing any signs of slowing down. The "Throw My Arms Around the World" singer is gearing up to release her upcoming studio album, God's Work, later this year, but before she drops an album that fans are guaranteed to have on repeat, she's giving us yet another reason to use her as fashion inspiration.
BEAUTY & FASHION・2 HOURS AGO
countryliving.com

While everyone is moving on from the chaotic energy known as 2021, LeAnn Rimes' New Year's post is giving us every excuse to reminisce on the past year for a bit longer. The Meet Your Makers Showdown co-host had one heck of a year in 2021. From recording her upcoming studio album God's Work, hand pouring candles, recording her Wholly Human podcast and co-hosting discovery+'s latest craft competition show, LeAnn made the most of her time all while making sure to stay connected with fans.
BEAUTY & FASHION・8 DAYS AGO
shefinds

These Before And After Pics Of Megan Fox Are INSANE—What Did She Do To Her Face?

Fans probably won’t be too surprised to discover that Megan Fox’s face is a lot different than it used to be at the start of her career. Although the 35-year-old Johnny And Clyde actress has, even to this day, never admitted to going under the knife or having any non-surgical procedures done, it’s hard to ignore that her face has changed quite dramatically over the years.
CELEBRITIES・18 DAYS AGO

The Queen made a rare comment about her great-granddaughter Lilibet Diana Mountbatten-Windsor during her annual Christmas message to the nation. During the speech, which aired at its usual time of 3pm on Christmas Day, the monarch gave special mentions to the new additions to the royal family this year, which includes the Duke and Duchess of Sussex's daughter, who was born in June 2021. Her Majesty remarked at one point in the speech: "Adults, when weighed down with worries, sometimes fail to see the joy in simple things, where children do not," before going on to discuss the "young children" her family have welcomed this year.
U.K.・22 DAYS AGO
In Style

Kim Kardashian and Pete Davidson have officially touched down in the Bahamas, but their outfits appear to say otherwise. On Wednesday, the jet-setting couple was photographed walking on a dock together after a boat ride in the Caribbean, and their looks weren't exactly what we'd consider to be island-ready. For...
CELEBRITIES・10 DAYS AGO
GlobalGrind

Head inside for some awesome throwbacks and more recent shots, as we wish the icon a blessed day.
CELEBRITIES・3 DAYS AGO
In Style

Kendall Jenner is an avid Ugg fan. She, like many other supermodels and celebs, is regularly seen wearing the cozy shoe. But her trusty boots might have some new competition in the form of a winter slip-on that kinda, sorta looks like the iconic Jennifer Aniston-approved puffer jacket from The North Face. Yeah, we thought you would be all ears.
BEAUTY & FASHION・12 DAYS AGO
Footwear News

Lori Harvey gave her Instagram followers a close look at the new Burberry Lola bag on Tuesday. The 24-year-old socialite shared two new photos of herself as she posed with the purse and a brown trench coat that was designed by the luxury label. View this post on Instagram A post shared by Lori Harvey (@loriharvey) The softly structured quilted bag is crafted with Italian-tanned lambskin. The style is punctuated with a polish chain strap and the Thomas Burberry monogram. The handbag also includes interior slip pocket and a fold over top with magnetic closure. “I love trench coat weather and #TheLolaBag...
DESIGNERS & COLLECTIONS・18 DAYS AGO
People

Machine Gun Kelly did not want to ask Megan Fox to be his wife with anything run-of-the-mill. Instead, the rocker helped design a two-stone ring with their one-of-a-kind love in mind. On Wednesday, the Born with Horns artist, 31, proposed to Fox after over a year of dating. Alongside his...
CELEBRITIES・3 DAYS AGO
Footwear News

Simone Biles took her sporty style on a party bus en route to Austin, Texas this week. While taking a mirror selfie on Instagram Stories before boarding the bus with her friends, the Olympian wore sleek black leggings. She paired the bottoms with a matching black crop top, as well as a puffy jacket in a deep berry hue. Biles completed her look with two delicate necklaces and several rings. For shoes, the award-winning gymnast elevated her athleisure with a pair of high-top Dior sneakers. The cream pair featured an allover gray print of the brand’s signature logo, as well as a lace-up silhouette....
TEXAS STATE・13 DAYS AGO
Footwear News

Lori Harvey Is All Tied Up with Michael B. Jordan in Chocolate Disco Dress and Wrapped Sandals

Lori Harvey’s 2022 was off to a romantic start, as she rang in the new year with a kiss from beau Michael B. Jordan. The model shared sweet photos of the couple on Instagram, wearing a halter-neck minidress by Raisa Vanessa. The sleek backless number featured a chocolate brown palette covered in square-shaped sequins, instantly channeling ’70s glamour. Harvey accessorized with a gold bracelet, watch and drop earrings. “Happy New Year,” she coupled the romantic photos. View this post on Instagram A post shared by Lori Harvey (@loriharvey) When it came to shoes, Harvey donned a pair of Femme LA’s ankle-wrap sandals. The...
BEAUTY & FASHION・13 DAYS AGO