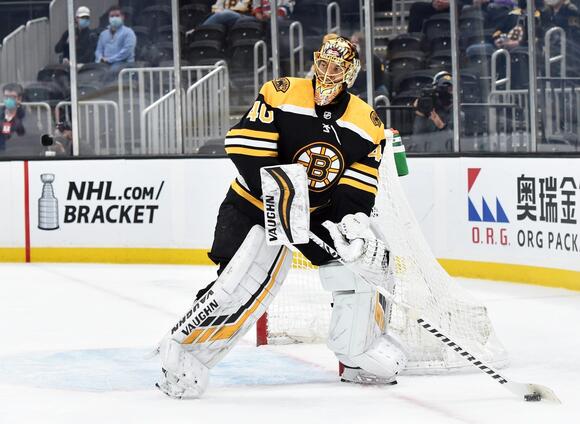 Some eyebrows were raised last week when Tuukka Rask was spotted on the ice at Warrior Ice Arena going through some drills and testing out his surgically repaired hip. It was a reminder that Rask’s potential return to the Bruins is not all that far away , with Rask previously saying he could be ready by Christmas or early January.

Making his weekly appearance on Gresh & Keefe on Thursday, NESN analyst Andrew Raycroft discussed the Bruins’ goaltending situation and a possible Rask return, and he laid out one possibility that would allow the Bruins to get Rask into some games and see how he does before actually committing to signing him for the rest of the season.

“Just spitballing it with a couple agents, to get around not signing that contract right away and not putting him on the books until he’s completely ready, you could technically sign him to a PTO, a player tryout agreement, and have him work off of that,” Raycroft explained. “I think they last two weeks at a time. There are PTOs in the NHL and in the AHL, so technically if you wanted to have him play games in the AHL, you could sign him to that PTO down there. That was a few of the ideas I got. I don’t know what the real end game is, but it will be interesting to see how they can work and maneuver that.”

Raycroft also broke down the play of Swayman and Ullmark so far this season and discussed the possibility of sending Swayman to the AHL if and when Rask returns. Listen to the full interview below:

Karson Kuhlman’s time with the Boston Bruins has come to an end, as the 26-year-old right wing was claimed off waivers by the Seattle Kraken on Monday.
NHL・2 DAYS AGO
Sportsnaut

Now that the 2021-22 season is about half of the way through, and Covid is ravaging many clubs, it’s time
NHL・1 DAY AGO
WEEI Sports Radio

With every league roughly midway through the 2021-22 season, we take a look at how some of the Boston Bruins’ top prospects are doing, including Fabian Lysell, Jack Studnicka and Mason Lohrei.
NHL・2 DAYS AGO
NBC Sports

Get to know Tuukka Rask: Stats, contract and more

Tuukka Mikael Rask was selected in the first round (21st overall) by the Toronto Maple Leafs in the 2005 NHL Draft. The Boston Bruins acquired him in a 2006 trade with the Leafs in exchange for goalie Andrew Raycroft. Rask made his B's debut during the 2007-08 season and was...
NHL・1 DAY AGO

The NHL announced the dates and times for nine rescheduled Boston Bruins games. Their February break – initially scheduled for the Olympics – has now been filled in.
NHL・7 HOURS AGO
WEEI Sports Radio

The Boston Bruins’ five-game winning streak came to a crashing halt Tuesday night in an ugly 7-1 loss to the Carolina Hurricanes. What do they do after a night like that? “Burn the tape,” according to Patrice Bergeron.
NHL・22 HOURS AGO
Sportsnaut

The Boston Bruins will look for a return to normalcy when they host the Washington Capitals on Thursday night. The
NHL・8 HOURS AGO
WFAN Sports Radio

Islanders veteran Zdeno Chara dropped Flyers defenseman Zack McEwan with an uppercut to the face, then made sure to check if his opponent was OK.
NHL・11 HOURS AGO

Where Raymond goes from here is up to him. He has the inside track for the Calder, and he’s on the path toward a long and successful career in Detroit.
NHL・7 HOURS AGO
Sportsnaut

The NHL is using the previously planned Olympic break as a period to make up games that were postponed by COVID-19 outbreaks earlier this season.
NHL・7 HOURS AGO

Avs forward Nazem Kadri is headed to the NHL All-Star Game after all after getting voted in by fans through the “Last Men In” vote.
NHL・1 DAY AGO
San Diego Union-Tribune

Brayden Schenn and Ivan Barbashev each had two goals and two assists as the St. Louis Blues came from behind to beat the Nashville Predators 5-3
NHL・1 DAY AGO
WGR550

When Boston hosts the Carolina Hurricanes on Tuesday night, the Bruins will retire the No. 22 of Hall of Fame
NHL・2 DAYS AGO
Sportsnaut