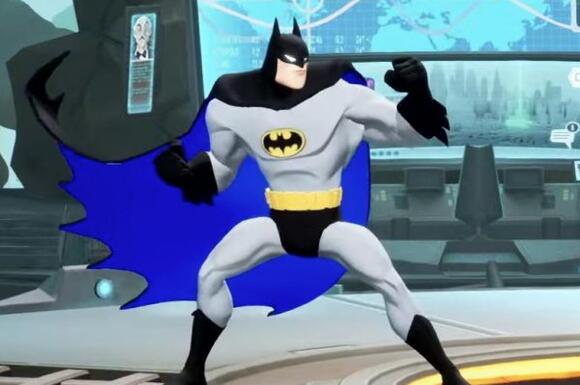 Batman uses his grapple hook and gas bombs against enemies while Bugs Bunny can dig holes in a new gameplay trailer.

Players can group up in teams of two with one-on-one matches also available. Stages include locations such as Batman's BatCave.

Each character will be fully-voiced with some voice actors returning to reprise their roles including Kevin Conroy as Batman, Maisie Williams as Arya, John DiMaggio as Jake and more.

Player First Games has promised dedicated servers for best in class online play. The game will also be updated with more characters, costumes and other customization options for each character.

Captain Marvel 2 is shaping up to be a bigger movie than we ever expected, and while very little has been revealed about the plot, we do know The Marvels will unite Carol Danvers with Ms. Marvel and Monica Rambeau/Spectrum. Chances are it will be a cosmic adventure based on WandaVision's mid-credits scene, but it looks like the sequel will also include a couple of familiar faces.
MOVIES・15 DAYS AGO
urbanmatter.com

Another Batman trailer, another breakdown. As the new trailer didn’t waste any, let’s not do the same and get into the latest trailer for the highly anticipated reboot. It’s clear from the nearly three minute long trailer that Selina Kyle aka Catwoman will be a large part of the film’s story as it appears she and the Batman will be teaming up to bring down the Riddler. Her motivations for wanting to team up are still unclear but it could be setting up a potential double cross on Batman as it is often unclear what side the burglar is on at times. We also get our biggest peek at the Riddler as he repeatedly taunts Batman throughout the trailer and even hints to knowing the vigilante’s true identity. This seems to be a recurring element in Batman films and while it would be refreshing to see a film where he doesn’t reveal his identity or it’s somehow deduced by the villain, it could be an interesting take on the Riddler as this new iteration seems to be carrying a grudge towards the Wayne family.
MOVIES・13 DAYS AGO
manofmany.com

The latest trailer for Matt Reeves’ The Batman has been revealed, giving fans a closer look at Zoe Kravitz’s charismatically unhinged Selina Kyle/Catwoman. The new teaser, which is entitled ‘The Bat and the Cat’, dives into the tumultuous relationship between the world’s greatest detective and his feline-focused anti-hero companion. But underpinning the decidedly more brutal romantic tale is the looming threat of destruction, spurred on by Paul Dano’s disturbing turn as The Riddler. Three trailers down and the hype train for Robert Pattinson’s Bruce Wayne epic doesn’t look to be slowing down any time soon.
MOVIES・12 DAYS AGO
gamingideology.com

The Batman has revealed a new trailer (or teaser) called "Duet," which you can watch below! The new 30-second spot for The Batman focuses (once again) on Robert Pattinson's Batman and Zoe Kravitz's Catwoman, and their electric chemistry in this Batman reboot film. In many ways, this "Duet" spot is a shortened version of The Batman's recent "Bat and Cat" trailer release – albeit with some select new footage added. That footage showcases more of the thrilling (and bullet-riddled) action that The Batman director Matte Reeves has for fans – as well as the lavishly dark Noir imagery by cinematographer Greig Fraser (Rogue One, Dune).
MOVIES・11 DAYS AGO
gamingideology.com

Marvelous has released the gameplay of frischces Runic Factory 5 released. Here the different facets of the role play are shown. I am the author for Gaming Ideology and loves to play Battle Royale games and loves to stream and write about them. I am a freelancer and now is the permanent member of Gaming Ideology.
VIDEO GAMES・13 DAYS AGO
iheart.com

Right when I thought they couldn't top the Dark Knight series they hit us with this!
MOVIES・12 DAYS AGO
Inverse

Real JRPG fans know that Final Fantasy Tactics is one of the all-time greats, even if it was overshadowed (perhaps rightfully so) by one of its contemporaries called Final Fantasy VII. While its reality-breaking sequels were also solid, a bonafide spiritual successor called Triangle Strategy is nearly upon us. Is it a strange name? Definitely. Will it be fun? Absolutely.
VIDEO GAMES・13 DAYS AGO

Nintendo of Japan has released a new Pokémon Legends: Arceus introductory video, which is viewable below. Released alongside a trio of domestic TV commercials, it offers a six-minute gameplay overview ahead of the title’s arrival later this month. Pokémon Legends: Arceus will be released exclusively for Nintendo Switch...
VIDEO GAMES・9 DAYS AGO
mmobomb.com

Stormhaven Studios, the developer behind upcoming indie sandbox MMORPG Embers Adrift, was busy over the holidays. Half a dozen videos have been posted to its YouTube channel since the start of the new year, including a cinematic trailer and several gameplay videos, which should whet the appetites of anyone looking forward to the game.
VIDEO GAMES・13 DAYS AGO
Twinfinite

DMM and Koei Tecmo released another trailer of their upcoming Musou game Touken Ranbu Warriors. This time around, we get an extensive look at the gameplay and features of the game, including easy and normal battle modes (the former lets you pretty much automate combos by pressing a single button), the interaction with a buddy character in battle, relationships outside of battle, minigames, and the photo mode.
VIDEO GAMES・9 DAYS AGO
cogconnected.com

Lost Ark Online’s Latest Gameplay Trailer Shows Off Arkesia And More. The Action RPG genre has grown significantly over the past few years with games such as Path of Exile and Diablo. Lost Ark Online initially released in 2018 in the South Korean region. It blew up in popularity and as it offered amazing graphics, fun gameplay and a deep endgame. In 2021, it was announced that Amazon Game Studios has announced that the company, along with Smilegate, will be releasing Lost Ark Online in 2022 on PC. Lost Ark Online is set for release on PC via Steam on 11th February. The Bronze Founder’s Pack will cost $14.99USD and there are Silver, Gold and Platinum Packs if necessary. Today, the company released a gameplay video highlighting Arkesia and more.
VIDEO GAMES・9 DAYS AGO

Rainbow Six Extraction Gets New Trailers About the Story, Gameplay, and Enemies

Today Ubisoft launched a pair of new trailers of its upcoming tactical shooter Rainbow Six Extraction. This time around we get a video in which REACT R&D director Dr. Elena “Mira” Alvarez (who also appears in Rainbow Six Siege as an operator) explains the backstory of the game.
VIDEO GAMES・9 DAYS AGO
Twinfinite

Genshin Impact Gets Extensive Trailer All About Shenhe’s Gameplay

Following the reveal of Version 2.4 of Genshin Impact, developer MiHoYo released a new trailer featuring one of the new characters that will come with the update. This time around, following the first trailer that focused exclusively on her backstory, and the second from earlier this morning that was a bit of a mix, we take an in-depth look at Shenhe’s gameplay and her moves.
VIDEO GAMES・12 DAYS AGO