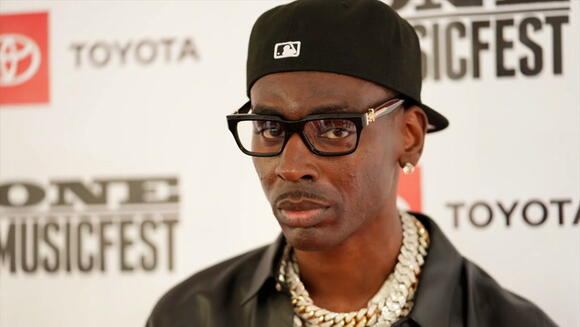 Photos of two gunmen suspected of ambushing and killing rapper Young Dolph as he was buying cookies at a Memphis store on Wednesday have emerged.

The 36-year-old artist, real name Adolph Robert Thornton, Jr, was inside Makeda’s Homemade Butter Cookies when two men drove up and fire multiple rounds into the store through a window . 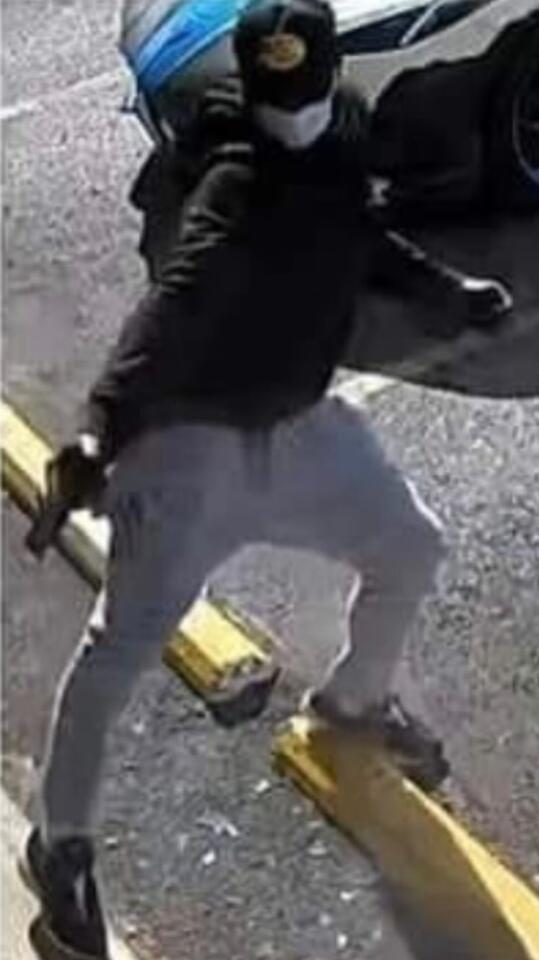 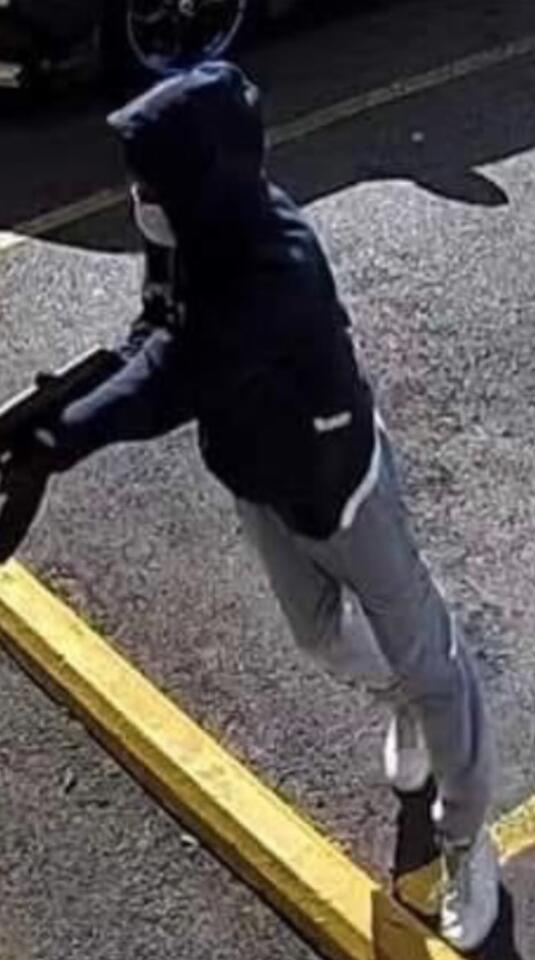 In one of the images, Dolph’s camouflage-colored Lamborghini could be seen parked outside of the shop. 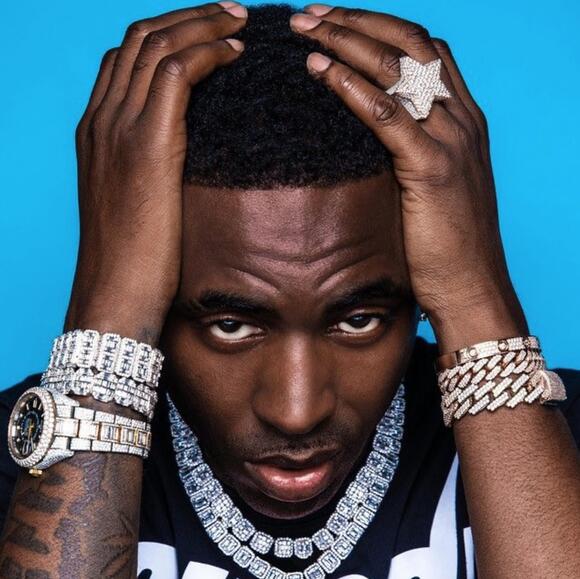 “Everybody that know me knows I play this man music EVERY DAY ! He was so genuine so real so kind to me and tfarris always,” Megan Thee Stallion, who collaborated with him on the song RNB, wrote on Instagram.

“Rest in Peace to my true friend a legend Dolph,” she wrote on Twitter.

“Always showed love everytime I seen him this is tragic God bless his family man.”

Dolph, who released his debut album King of Memphis in 2016, was known for giving back to the community, and had been delivering turkeys to underprivileged families in Memphis prior to the shooting.

Memphis police have called the shooting “senseless”, adding, “our hearts go out to the Thornton family and all who were affected by this horrific act of violence.”

He is survived by a partner and two children.

once you escape the hood, good sense would tell you not to return and change the company you keep and use to run with. you can help your community more alive and healthy

Young Dolph murder suspect Justin Johnson has yet to turn himself in to authorities despite announcing his plans to surrender this past weekend. In fact, instead of being taken into custody on Monday (Jan. 11) to face charges of first degree murder, attempted first degree murder, and theft of property $10,000–$60,000, the 23-year-old, who also performs under the stage name Straight Drop, released a new music video the very same day. Titled “Track Hawk,” the clip captures Johnson flaunting stacks of money and riding in flashy vehicles while rhyming about his alleged life of crime. While Johnson does not directly reference...
MEMPHIS, TN・17 DAYS AGO
HipHopDX.com

Memphis, TN – The murder suspects for Young Dolph will be arraigned in a Memphis courtroom on Wednesday (January 17). Ahead of the hearing, more details on one of the suspects has been revealed. According to ABC24 Memphis, 23-year-old Justin Johnson has also been arrested on violation of sex offender registry charges.
MEMPHIS, TN・10 DAYS AGO
WRBL News 3

MEMPHIS, Tenn. — Two suspects in the murder of Memphis rapper Young Dolph appeared before a judge in a Memphis court for the first time on Wednesday. Justin Johnson and Cornelius Smith have been indicted and were arraigned Wednesday morning. Video of their appearance can be seen in the player at the top of this […]
MEMPHIS, TN・9 DAYS AGO
Essence

The latest suspect, Justin Johnson, was captured in Indiana on Tuesday. It’s been two months since Young Dolph was gunned down on November 17, 2021 in broad daylight while buying cookies at Makeda’s, a popular downtown Memphis bakery. The Thornton family (Young Dolph’s real name was Adolph Thornton Jr.) is closer to having answers, as three suspects are now in custody for the shooting.
PUBLIC SAFETY・15 DAYS AGO

The Paper Route Empire has released a new project to honor Young Dolph who was tragically lost last November. The project is a compilation of songs aimed to pay tribute to the late rapper. The lead single is titled “LLD (Long Live Dolph)” which features Jay Fizzle and Rico Barrino.
CELEBRITIES・7 DAYS AGO
WREG

Tribute album for Young Dolph to be released Friday

MEMPHIS, Tenn.– A tribute album for Memphis rapper Young Dolph is set to be released this Friday. Two months after Young Dolph was gunned down at a cookie shop in Memphis, fans say this new music is keeping his legacy alive. In a music video already viewed over a million times, Young Dolph’s cousin and […]
MEMPHIS, TN・9 DAYS AGO
WIBC.com

INDIANAPOLIS — The U.S. Marshals Service is sharing more information about the arrest of Justin Johnson, a man wanted for the murder of rapper Young Dolph. Johnson is accused of fatally shooting Adolph Thornton, Jr., 36, a.k.a. “Young Dolph,” in Memphis on Nov. 17. Johnson was tracked...
INDIANAPOLIS, IN・14 DAYS AGO
HipHopDX.com

A mother and son have been jailed for killing a 17-year-old boy in a “shocking” machete attack sparked by petty gang rivalry.Levi Ernest-Morrison was chased and fatally stabbed in Sydenham, south London on the evening of April 10 last year.Mother-of-three Nichola Leighton, 37, who drove his killers to and from the scene in her red Suzuki jeep, was found guilty of his murder.On Friday, the former care manager was jailed at the Old Bailey for life with a minimum term of 23 years.Her 19-year-old son Tyreese Ulysses, from Catford who suffers from paranoid schizophrenia and was driven by...
PUBLIC SAFETY・20 HOURS AGO
spectrumnews1.com

LOS ANGELES (CNS) — Actress Kathryn Kates, who appeared in episodes of “Seinfeld” and “The Many Saints of Newark,” has died. She was 73. Kates died of cancer on Saturday, her agent, Ben Jordan, told USA Today on Tuesday night, adding a memorial service is being prepared for her in the spring.
LOS ANGELES, CA・2 DAYS AGO
92.9 NIN

These Are the Longest Prison Bids in Hip-Hop History

It doesn’t take much to get caught up in the mix. When you’re a high-profile artist who comes from a lifestyle of actual street activity or the glamorization of it, you’re even more prone to be a target by the police at all times. And unfortunately, many of rap’s most popular faces and names have done pretty lengthy bids in the can. XXL takes a look at which artists had long prison bids and how their run-ins with the law occurred.
MUSIC・10 DAYS AGO
Majic 94.5

The latest uphill legal battle for controversial hip-hop couple Nicki Minaj & Kenneth Petty now comes in the form of an assault allegation from a former security guard who claims Minaj berated him to the extent that it caused Petty to break his jaw with one punch.
CELEBRITIES・1 DAY AGO

Madonna teased that Julia Fox may be the leading lady in her biopic after grabbing dinner with the actress and her new beau, Kanye West. “Went to dinner with Julia to talk about my movie and some other folks showed up…………………😎🎥🎬,” the Queen of Pop, 63, captioned a series of photos with Fox, 31, West, 44, Floyd Mayweather and Antonio Brown on Instagram Thursday.
CELEBRITIES・14 DAYS AGO
Popculture

Relatively Famous: Ranch Rules follows the model set by Paris Hilton and Nicole Richie during the socialites' shenanigans in their reality series, The Simple Life. This time around, Ranch Rules documents celebrity kids on a Colorado ranch as they try to make due. The series stars the kids of notable faces like comedian Martin Lawrence and actor David Hasselhoff. But none have a story quite like Ebie Wright.
CELEBRITIES・2 DAYS AGO
Radar Online.com

Kanye West isn't the only one in his relationship who has an inflated ego. It appears Julia Fox is getting too big for her britches after being paraded around Paris with the rapper after just a few weeks of dating. Article continues below advertisement. According to reports, Fox got into...
BEAUTY & FASHION・1 DAY AGO
iHeartRadio

The Memphis rapper stopped by The Breakfast Club on Wednesday
NBA・2 DAYS AGO
HipHopDX.com

Gunna's 'Pushin P' Leaves Styles P Perplexed: 'What The Hell Does It Mean'

Gunna’s “Pushin P” catchphrase has become one of the hottest trends on social media. Fans and fellow rappers alike (including Young Thug, Future and Drake) have been using the term on Instagram, Twitter and elsewhere. Even Nike has joined the “P” bandwagon. However, there’s one...
CELEBRITIES・1 DAY AGO
rapradar.com

Papoose gathers some of the game’s top elite in his new music video. In the all-star-studded clip, directed by WillC & Tana, Pap takes his seat at the throne and kicks off the Timbaland production. Tity Boi, Remy, Busta, and Tunechi soon follow suit on a set packed with animated effects, lights, and breakdancers.
MUSIC・2 DAYS AGO
HipHopWired

It seems Kanye West’s latest antics did not sit well with Charlamagne Tha God. He recently called out Ye for dissing Pete Davidson and going against the God code. As spotted on Bossip the media personality is giving the “Touch The Sky” rapper the side eye yet again. On the latest episode of his Brilliant Idiots podcast he […]
CELEBRITIES・2 DAYS AGO
RNB Cincy 100.3

Hot Spot: This Housewife Was Fired From The Bravo Franchise! [WATCH]