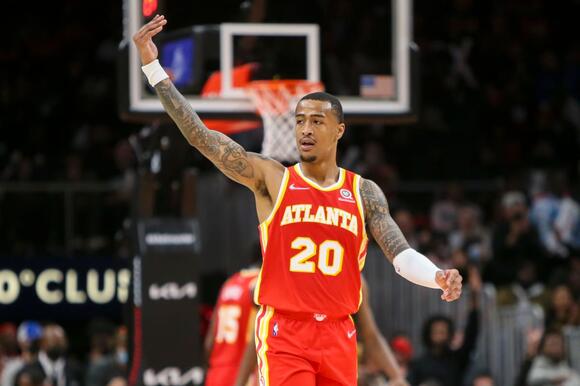 "What it do, baby?" Well close enough.

"What it do, babbyyyy?" It was a rare moment where Kawhi Leonard let his guard down and showed his personality. Unless you have been living under a rock since June of 2019, you have seen the clip of Leonard and teammate Serge Ibaka celebrating the Toronto Raptors first and only NBA Championship.

The video clip went viral and spawned both memes and unironic appreciation for the saying. On some levels, it had to get kind of played out for Leonard. But he's cashed in on the phrase, both filing a trademark and joking about it in commercials.

We're going on two and a half years and people still love it. The latest person to repurpose the phrase is Atlanta Hawks forward John Collins. He went a little off-script and personalized it to entail the Hawks winning streak, but Collins' inspiration is obvious. Check out 'John the Baptist' following last night's victory of the Boston Celtics .

Honestly, Leonard is a gift to basketball and the world. You don't have to search hard to find plenty of hilarious video clips of him. Addressing fans , the media , and teammates . Every single one of them are hits. NBA players such as Collins would be wise to mimic Leonard as much as possible.

Trae Young Is Only Getting Better

Kawhi Leonard’s historic run with the Toronto Raptors in the 2018-19 season was arguably one of the greatest influences a player can have in a team. But approaching free agency, the marquee player was bee chased by top teams in order to somehow get their hands on him and acquire his service. One among this top spoken of teams was Los Angeles Lakers, who wanted to equip a solid duo of LeBron James and Kawhi Leonard to dominate the league.
NBA・1 DAY AGO
fadeawayworld.net

With both Kawhi Leonard and Paul George out with respective injuries, the LA Clippers are without their two superstars. Leonard and George joined the Clippers in 2019 to help bring their hometown franchise to their first NBA championship. But neither star has been able to do so, and now, both players could miss the rest of the season.
NBA・1 DAY AGO
All Hawks

The Hawks got a big win in Atlanta on MLK Day.
NBA・1 DAY AGO
Sportsnaut

The Milwaukee Bucks have three players ruled out for the game against the Atlanta Hawks on Monday.
NBA・2 DAYS AGO
All Hawks

Herb Jones of the New Orleans Pelicans has come out of nowhere to establish himself as one of the top rookies and one of the best draft picks the Pels have ever made. He is arguably the best defender from his rookie class, is emerging on offense and is already basically untouchable in a trade even though he was taken in the second round.
NBA・3 HOURS AGO
All Hawks

Everything you must know for the game in Atlanta.
NBA・4 HOURS AGO

John Collins on Hawks: 'I still would like to be a part of this team going forward'

The Atlanta Hawks, 18-25, are the biggest disappointment of the 2021-22 NBA season. As a result, they’re open for business.
NBA・22 HOURS AGO
NBA Analysis Network

The Atlanta Hawks just completed a comeback over the Milwaukee Bucks on Monday night. Unfortunately, they still sit fairly comfortably in 12th place in the Eastern Conference. However, that is only the beginning of their issues ahead of the NBA trade deadline. According to recent NBA rumors, power forward John...
NBA・21 HOURS AGO
Larry Brown Sports

Kawhi Leonard has not played since June of last year, but he is definitely still Kawhi Leonard. A funny video of the LA Clippers star went viral this week. Leonard was in attendance for the Los Angeles Rams’ Wild Card game against the Arizona Cardinals on Monday night at SoFi Stadium. The former Finals MVP was with Clippers teammate Paul George, Los Angeles Dodgers star outfielder Mookie Betts, and others. While the rest of his entourage danced around and waved Rams towels, Leonard was not feeling the vibe. Take a look.
NBA・19 HOURS AGO

When it comes to basketball, Ben Simmons has been dealing with a surplus of issues, most of which are directly related to his messy breakup with the Philadelphia 76ers. After months of trade demands, the team has tried to make him return, and Simmons has sacrificed millions to ensure that doesn't happen.
CELEBRITIES・17 DAYS AGO
Sportsnaut

Bookmark. Save. Do your thing. We will be providing constant updates on this page as it relates to the biggest
NBA・21 HOURS AGO
ClutchPoints

LeBron James and Magic Johnson engaged in a bit of an indirect back-and-forth on Twitter over the weekend. Following the Los Angeles Lakers blowout loss to the Denver Nuggets on Saturday, the Hall of Fame point guard sent out a critical tweet calling out the Lakers’ effort. Less than...
NBA・1 DAY AGO
FastBreak on FanNation

The Los Angeles Lakers have received plenty of criticism this campaign, given their inability to win games consistently. Instead, they have struggled to find their touch, and even though they have entered winning streaks, it's been because of individual performances rather than a collective effort. LeBron James and Anthony Davis...
NBA・1 DAY AGO
FastBreak on FanNation

Kyle Kuzma threw down a huge dunk on Joel Embiid during the game between the Philadelphia 76ers and Washington Wizards on Monday afternoon.
NBA・1 DAY AGO
FastBreak on FanNation

The Golden State Warriors are hosting the Detroit Pistons on Tuesday evening, and the Warriors shared an awesome photo of Klay Thompson and Steph Curry.
NBA・13 HOURS AGO
fadeawayworld.net

LeBron James Shows His Love For Savannah James On Her Instagram Video: "When You Walked Downstairs I Said To Myself "Goddamn! That's Mine! Simply Beautiful Queen!"

LeBron James married his high-school girlfriend Savannah James and their relationship as well as their family is something that fans of the NBA admire greatly. The couple are known for supporting each other through the trials and tribulations that come with LeBron being one of the most popular players in the history of the game and someone that is constantly in the public eye.
NBA・2 DAYS AGO