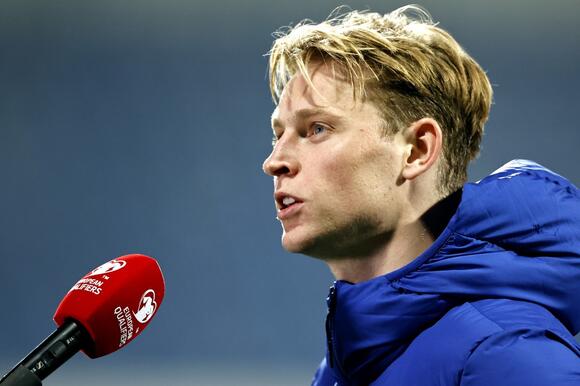 De Jong was linked with a move to the Etihad Stadium before his switch to Barcelona from Ajax in 2019, with Manchester City boss Pep Guardiola keen to add him to his ranks.

Since his move to Spain, the Netherlands international has made more than 100 outings for Barcelona, establishing himself as a key player for the Blaugrana during what has been a difficult time on and off the pitch for the La Liga outfit.

However, it has been reported by Spanish outlet El Chiringuito that Barcelona are willing to consider offers for the 24-year-old, with newly-appointed manager Xavi open to selling the Arkel-born star to raise funds ahead of the January transfer window.

According to Fichajes.net, whose information has been translated and relayed by Sport Witness, Manchester City have transferred a 'formal proposal' worth €90 million to Barcelona for De Jong.

It has been stated that the Premier League champions plan to add the midfielder to Pep Guardiola's core plans, as they 'try to take advantage' of the uncertainty surrounding De Jong's future at Barcelona.

The Dutch star has been heavily criticised for his displays on the pitch over the past few seasons, and with Xavi at the helm following Ronald Koeman's departure, De Jong could be offloaded to bring in revenue at the Camp Nou.

Barcelona could even try and offer De Jong as part of a package deal to sign Manchester City wantaway star Raheem Sterling, who has been heavily linked with a move to Catalonia after falling out of favour in Manchester in recent months.

Though Rodri has been in sensational form for Guardiola's side since August, City could pounce on the opportunity of signing De Jong as a long-term replacement for veteran midfielder Fernandinho, who turns 37 in May,

James McAtee continues to turn heads with his mesmeric displays at youth level, emerging as Manchester City Under-23’s saviour after scoring the winner in their 1-0 win against Chelsea on Monday night. The Salford-raised midfielder is the Premier League 2 top scorer at present, with 14 goals in 18...
PREMIER LEAGUE・21 HOURS AGO
CityXtra

Julian Alvarez has been heavily linked with a potential switch to Manchester City across the past few days, with negotiations between all relevant parties seemingly accelerating in a matter of hours on Saturday. Following the departure of legendary forward Sergio Aguero last summer, and the recent sale of Ferran Torres,...
PREMIER LEAGUE・2 DAYS AGO
The Independent

Pep Guardiola believes record signing Jack Grealish delivered “by far” his best performance in a Manchester City shirt during Saturday’s 1-1 draw at Southampton Playmaker Grealish is yet to consistently hit top form for the Premier League leaders since arriving for £100million from boyhood club Aston Villa last summer.The England international, who has managed only two top-flight goals and a couple of assists this term, was unable to inspire City to victory on the south coast as their remarkable winning run ended at 12 games.He cut a frustrated figure at times and was involved in a first-half flash point with...
PREMIER LEAGUE・2 DAYS AGO
CityXtra

After seeing their 12-game winning run in the Premier League be halted by Southampton following their 1-1 draw at St. Mary's at the weekend, Manchester City players and staff have been handed a two-week break before resuming action in the FA Cup against Fulham on February 5th. The likes of...
PREMIER LEAGUE・22 HOURS AGO

Manchester City were finally held in their tracks after going on an incredible 12-game winning run in the Premier League as Southampton held the league leaders with a spirited display at St. Mary's on Saturday evening. The Saints took the lead in less than 10 minutes, as Kyle Walker-Peters' brilliant...
PREMIER LEAGUE・22 HOURS AGO
CityXtra

While Pep Guardiola has admitted previously that Manchester City are highly unlikely to announce any fresh incomings in January despite the ongoing speculation around the imminent arrival of Julian Alvarez, the Sky Blues could still send a few academy youngsters on loan till the summer. Cole Palmer, 19, has been...
PREMIER LEAGUE・21 HOURS AGO
CityXtra

Manchester City’s status as one of the greatest ever teams in Premier League history is undoubtable at this point. Winning three Premier League titles, one FA Cup trophy and four Carabao Cups in a row, Pep Guardiola’s side have certainly taken English football by storm, since the Catalan's arrival in the summer of 2016.
PREMIER LEAGUE・2 DAYS AGO
SB Nation

Pep Guardiola was quite complimentary for Jack Grealish’s play as the star Englishman played well in a draw vs Southampton. Let’s check out the quotes. “At Aston Villa he played wide and after he moved wherever he wants and came inside. I think he’s the perfect player to play between the lines,” the City boss said.
PREMIER LEAGUE・1 DAY AGO

The Argentinian media lit up last week, as if one mass email had been sent out to everysinglejournalist@argentina.com, with reports that Manchester City were about to activate the release clause of River Plate’s striker, Julián Álvarez. At first, I assumed we were on the receiving end of...
PREMIER LEAGUE・1 DAY AGO
CityXtra

"Disappointed But Not Surprised", "False Nine Ball Then" - Lots of Man City Fans React to Latest Update Regarding Julian Alvarez

Rumours surrounding who will replace Sergio Agüero as Manchester City's next recognised striker have certainly started to heat up in the past week. After reports suggesting the Blues were willing to meet any financial package Real Madrid were offering for the services of Borussia Dortmund's Erling Haaland, another surprise name was thrown into the mix.
PREMIER LEAGUE・1 DAY AGO
CityXtra

There certainly are not many clubs in world football that have a better collection and range of wingers than Manchester City at present. Raheem Sterling and Riyad Mahrez are undoubtedly world-class in their respective positions, while Phil Foden has emerged as one of the best young players in Europe as a left-winger, and Gabriel Jesus is enjoying a renaissance down the right flank.
PREMIER LEAGUE・1 DAY AGO

Amid Manchester City’s ongoing search for a new striker following Sergio Aguero's departure last summer, Dusan Vlahovic has been heavily speculated with a potential move to the Etihad Stadium after refusing to extend his existing deal at the Artemio Franchi Stadium past 2023. Apart from being a lethal goalscorer,...
PREMIER LEAGUE・1 DAY AGO
CityXtra

After Sergio Aguero bid farewell to the club, the failed pursuit of Tottenham's Harry Kane, and Ferran Torres’ move to Barcelona this month, things haven’t been looking rosy on the striker front for Manchester City this season. However, the reported signing of one of South America’s most highly-rated...
PREMIER LEAGUE・2 HOURS AGO
The Independent

Kevin De Bruyne has insisted the title race is not over and is determined to make sure Manchester City maintain their intensity.Premier League leaders City dropped points for the first time since October on Saturday as they were held to a 1-1 draw at SouthamptonThe result ended the champions’ run of 12 successive victories and allowed second-placed Liverpool who have game in hand and a trip to the Etihad Stadium to come, to cut their advantage to nine points.De Bruyne told City TV: “Obviously the schedule in December is a lot of games following each and we managed to...
PREMIER LEAGUE・1 DAY AGO
CityXtra

Since the significant investment from the Abu Dhabi United Group in 2008, Manchester City's youth academy has become a fruitful asset to the club. Whether it be from homegrown players making their way up into the first team, or players bought in and resold for profit, the club's utilisation of young talent has become paramount to it's long term sustainability.
PREMIER LEAGUE・3 HOURS AGO
CityXtra

Sri Lanka, Maldives, Dubai: Where Manchester City's Stars Have Jetted Off to During the Premier League Winter Break

Originally, Manchester City had been planning on heading off on a warm-weather training camp in Abu Dhabi, as Pep Guardiola and his backroom staff looked for the best of both worlds: Good weather, and retaining sharpness. However, as a direct result of the Covid-19 pandemic, and concerns over the safety...
PREMIER LEAGUE・19 HOURS AGO
CityXtra

All the talk around Manchester City at the moment is surrounding their potential new signing, Julian Alvarez. Since the 21-year-old burst onto the radar last Friday, rumours have suggested his move to the Etihad Stadium is imminent - but what they intend to do with the young talent is another question.
PREMIER LEAGUE・22 HOURS AGO
CityXtra

If there’s one theory that always comes true in the case of Premier League champion teams in recent seasons, it is their ability to pull wins out of the bag, while not necessarily being at their scintillating best. Manchester City have showcased this trait multiple times this season, and...
PREMIER LEAGUE・21 HOURS AGO
CityXtra

A comprehensive round-up of all the latest Manchester City transfer news and gossip from across the globe, as we head into the final week of the January transfer window. Manchester City are set to confirm the signing of River Plate forward, Julian Alvarez. (Graeme Bailey, 90Min) It is likely that...
PREMIER LEAGUE・1 DAY AGO