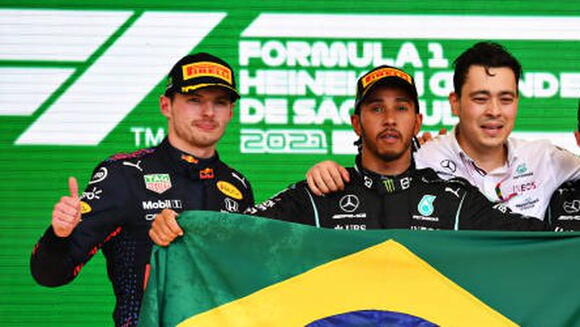 Hamilton, who came from tenth on the grid to clinch victory and reignited his chances of winning a record-breaking eighth world championship, was fined €5,000 for undoing his belt on the cooldown lap in Sao Paulo.

In a written ruling, the FIA said they were “sympathetic to the desire to celebrate” but that it is “fundamentally unsafe to undo the seatbelts while the car is in motion”.

“Further, F1 drivers set the example for junior categories,” the statement added. “It is critical that junior category drivers learn the importance of using all the safety devices of the car at all times.”

Masi clarified that drivers are permitted to loosen their safety harnesses after a race to celebrate but that to detach the belt fully presents a clear danger.

“Obviously, everyone knows that rule. It’s been discussed before as well, probably, I’ll guess around 18 months ago,” Masi told Motorsport.com . “And then I’m well aware it was discussed in [former FIA race director] Charlie’s [Whiting] time. Drivers were reminded that obviously on cooldown laps, there’s no problem loosening their belts but they need to remain fully attached.

“And it’s a safety item. I think the stewards have made it quite clear in their decision that it’s not about stopping celebrations at all. But at the pinnacle of motorsport it’s a safety issue, but also it’s sending a message all the way through that that type of behaviour is not acceptable.”

The FIA are holding a hearing on Thursday afternoon which could prove decisive in the championship race between Hamilton and Max Verstappen as Mercedes attempt to present evidence that forces retrospective action against the Red Bull driver.

In a contentious moment at Interlagos, Hamilton appeared to be set to overtaken Verstappen only for the Dutch driver to aggressively hold his line, causing both cars to veer off the track.

The race stewards deemed that no action was required at the time, much to the frustration of Hamilton and Mercedes boss Toto Wolff, and it was later revealed that one angle had not been available of the incident.

If Verstappen is judged to have breached the rules, he could face a retroactive five-second time penalty that would drop him to a third-place finish in Brazil or a grid penalty for the next race in Qatar.

In a bid to lower his carbon footprint, Lewis Hamilton has decided to let go of his internal combustion car collection, of which this bespoke Pagani Zonda LH760 is included. As reported last month, Hamilton was able to find a buyer for this car but the price was not disclosed. A report out of Italy reveals that this transaction was in the region of €10 million, which is roughly $11.3 million.
CARS・5 DAYS AGO
firstsportz.com

Ralf Schumacher the former racing driver has recently in an interview given his opinion on Lewis Hamilton’s decision of skipping the FIA Gala ceremony of the 2021 Formula1 season. It has been stated in dailymail that Ralf Schumacher believes it was wrong on part of the former 7-time world...
MOTORSPORTS・1 DAY AGO
firstsportz.com

Lewis Hamilton was surprisingly advised to move to Red Bull

The 2021 season saw the 7 times world champion Lewis Hamilton missing out the chance add one more world title to his cabinet as Red Bull Max Verstappen secured the title for himself in the controversial last lap of season finisher in Abu Dhabi GP. Team Mercedes and Lewis Hamilton was in utter-disbelief for the result which they deem unfair and disappointed Lewis Hamilton kept a law profile away from limelight stirring retirement rumors.
MOTORSPORTS・1 DAY AGO
The Independent

The Formula 1 off season rumbles on with the aftermath of Abu Dhabi still an intense topic in F1 circles, not to mention the link between that and Lewis Hamilton’s future. The seven-time world champion appears to be switching off after the bitter ending to the 2021 season as Max Verstappen stole a maiden world title following a thrilling final lap.But there is also much to debate and discuss surrounding both new rules for the upcoming season, as well as uncertainty surrounding who will line up on the grid.Another trend is how Mercedes, Toto Wolff and the FIA mend...
MOTORSPORTS・4 HOURS AGO

Novak Djokovic's Exit Guarantees at Least $155,000 for One of These Tennis Players

An American could now advance to the third round at the Australian Open in what seemed to be Djokovic's easy path.
TENNIS・1 DAY AGO
Los Angeles Times

The Australian Open was great before Novak Djokovic, and the Grand Slam doesn't need the unvaccinated star to prove its place in the tennis world.
TENNIS・1 DAY AGO
Sportsnaut

World No. 1 Novak Djokovic of Serbia will likely not be able to defend his title at the Australian Open
TENNIS・2 DAYS AGO
Sports Illustrated

Novak Djokovic vs. Australia: How Did We Get Here?

The world No. 1 is set to be deported from Australia and removed from the Australian Open draw after a multiweek standoff with the country’s government.
TENNIS・2 DAYS AGO

Novak Djokovic Could Be Barred From French, Spanish Opens As Well, Say Officials

Just days after missing the Australian Open and being deported from Australia because he was unvaccinated, Novak Djokovic, found out he may be barred from the next Grand Slam tournament on the tennis calendar, as well. A new vaccine pass law was approved France’s parliament on Sunday. It will require proof of vaccination to enter public buildings including sports venues, restaurants, cafes and cinemas. According to ESPN, the country’s Sports Ministry said Monday there would be no exemptions allowed, even if it meant the world’s No. 1 tennis player missing the French Open. “The rule is simple. The vaccine pass will be...
TENNIS・14 HOURS AGO
Sportsnaut

Rafael Nadal began his quest for a record 21st Grand Slam championship with a 6-1, 6-4, 6-2 win over American
TENNIS・23 HOURS AGO
The Independent

The Australian Open continues without Novak Djokovic after the saga over the men’s defending champion’s visa was finally brought to an end on Sunday evening. After Australia’s immigration minister had used his discretionary power to cancel Djokovic’s visa for a second time last week, the decision was upheld by three judges at an appeal, who determined that the world No 1’s presence “may be counterproductive to efforts at vaccination by others.” Djokovic was deported on Sunday and returned home to his native Belgrade, where he “will now be taking some time to rest and to recuperate, before making any...
TENNIS・1 HOUR AGO