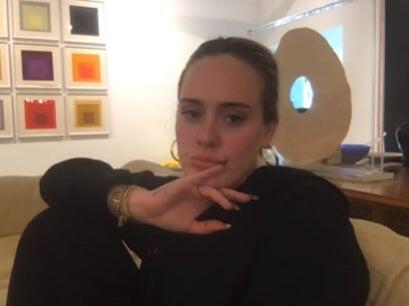 Adele has treated fans by dropping a video of herself singing an acoustic version of a new song ahead of her album release tomorrow (November, 19).

In a surprise post across her social media platforms, the Easy On Me singer can be seen giving the stripped-back rendition of the track To Be Loved – featured on the highly anticipated upcoming album 30 – from the comfort of her couch at home.

“To be loved and love at the highest count / Means to lose all the things I can’t live without,” the 33-year-old sings in the six-minute video.

After the unexpected performance, it’s safe to say fans were left feeling emotional after hearing the track for the first time.

With this song teasing what is to come on Adele’s new album30, it seems fans are not prepared for the emotional rollercoaster that they will go on when it’s released.

Meanwhile, others joked about the audio quality of the video due to the fact Adele recorded the acoustic performance on her laptop (it seemed the microphone couldn’t handle her insane vocals):

After belting out her last note of the song, Adele proved she was her own worst critic by immediately saying: “There were a couple notes but...” before signing off with a smile. Fans weren’t having a word of it and praised her performance:

While Adele dropped the surprise performance, the reviews have also been coming in for 30, with many music critics giving positive reviews.

Rolling Stone’s Rob Sheffield gave the album five stars and described 30 as the “best Adele album yet,” while it received a four-star rating from Annabel Nugent at The Independent who described it as lyrically “candid.”

“Adele has always been forthright – every bad feeling you’ve felt, she has confessed to feeling too – but there is a new immediacy here.”

Adele’s new album 30 will be released tomorrow on November 19.

Adele's undoubtedly still bummed about postponing her highly-anticipated Las Vegas residency, but she's doing the next best thing -- surprising her fans on FaceTime. The 30 singer surprised some of her most diehard who were already in Las Vegas before Adele tearfully announced the shows would not go on as scheduled due to many factors, including the ongoing COVID-19 pandemic. The fans, who posted their videos on social media, were stunned to see the GRAMMY-award winning singer on the other end doing her best to console them.
LAS VEGAS, NV・1 DAY AGO
The Independent

Demi Lovato has held a ‘funeral’ for their pop career.The “Cool for the Summer” singer, who uses gender-neutral pronouns, posted a picture on Instagram of them sitting in the studio with manager Scooter Braun and representatives from Island Records.Lovato captioned the post: “A funeral for my pop music.”The 29-year-old has also been posting snippets of rock-inspired tracks on Instagram, with one of the songs featuring the lyrics: “Yeah you’re pushing me to the edge/ Prod me, lie to me, ungodly things have been sent. Here are your tickets to the freak show baby, sci-fi, watch the freak go crazy.”Lovato’s...
MUSIC・2 DAYS AGO
iHeartRadio

The beloved country trio looked like they had a blast playing Brooks' hit '90s song...
MUSIC・4 DAYS AGO
iHeartRadio

Rhett previously revealed that he'll have two new albums out this year, including 'Where We Started.'
MUSIC・10 DAYS AGO

Avril Lavigne detailed her forthcoming Love Sux, which is out on February 25 through Travis Barker’s DTA Records. The eight-time Grammy-nominated pop punker also released the record’s fourth track, “Love It When You Hate Me” that features blackbear. Following the release of Love Sux‘s first single, “Bite Me,” the singles are Lavigne’s first new music since 2019. Love Sux is her seventh studio album, which is available for pre-order now.
TV SHOWS・9 DAYS AGO
undertheradarmag.com

Brooklyn-based artist Barrie has announced the release of a new album, Barbara, which will be out on March 25. Barrie has also shared a video for a new track from the album, “Quarry.” Check it out below, along with the album’s tracklist and cover art. Barrie elaborates...
MUSIC・14 DAYS AGO
wirx.com

Halestorm has released a new acoustic session recorded for “Coffee Notes,” a new music series from the company Death Wish Coffee. The video features Lzzy Hale and guitarist Joe Hottinger performing unplugged renditions of Halestorm’s new single “Back from the Dead” and their classic tune “I Miss the Misery.” Additionally, Hale sings a solo piano version of “I Will Always Love You,” originally written by Dolly Parton and made huge by Whitney Houston.
MUSIC・9 DAYS AGO
Pitchfork

Philadelphia hardcore outfit Soul Glo have announced their fourth album. It’s called Diaspora Problems, and it arrives March 25 via Epitaph. The band have shared lead single “Jump!! (Or Get Jumped!!!)((by the future))” ahead of the new LP, along with a music video. Check it out below, and scroll down for Diaspora Problems’ artwork and tracklist.
MUSIC・12 DAYS AGO

Avril Lavigne reveals her seventh studio album titled Love Sux will be released on February 25th... as she shares a snippet of a new track

Avril Lavigne has announced that her upcoming seventh studio album, entitled Love Sux, will be released on February 25. The 37-year-old singer's project will see her returning to her roots as a pop punk artist and will also feature contributions from artists such as Travis Barker and Blink-182's Mark Hoppus.
MUSIC・10 DAYS AGO
Pitchfork

Mitski has released another track from her forthcoming LP Laurel Hell, which is out February 4 via Dead Oceans. “Love Me More” comes with a video directed by Christopher Good, who previously directed “Nobody.” Watch it below. Mitski said of the new song in a statement:
MUSIC・11 DAYS AGO
Pitchfork

Camp Cope have announced their new album Running With the Hurricane and shared its title track. It’s the Melbourne band’s third LP and it’s due out March 25 via Run for Cover. Running With the Hurricane is named after the song of the same name by Australian folk group Redgum (of which singer Georgia Maq’s father was a member). Check out the title track below.
MUSIC・4 DAYS AGO
Z94

Bob Moses have announced their third album The Silence In Between. To help push the album, they have released the second song from the LP “Love Brand New,” following “Time and Time Again,” which was released in November 2021. “Love Brand New” was written with Michel...
MUSIC・9 DAYS AGO
The FADER

There's a new Babyface Ray album on the way. Face, the Detroit rapper's follow-up to last year's Unf*ckwitable, will be released on January 28. Along with today's announcement, he's sharing the album's lead single, "Dancing With The Devil," which features Pusha T and Landstrip Chip. In the video, Babyface Ray stars in a heist gone wrong. Check out the video below.
MUSIC・9 DAYS AGO
Showbiz411

Adele’s “30” album has been a big hit but sales are starting to wane. So pants suited singer has released a new video for her second single, “Oh My God.” This single follows the monster hit, “Easy On Me.” The video is very artful, directed by Sam Brown, beautiful cinematography by Roman Vasyanov. This week “30” is projected to sell 45,000 copies, but this video may perk it up.
CELEBRITIES・11 DAYS AGO
brooklynvegan.com

Boris share Hiroshima-inspired song “Beyond Good and Evil”; new album out this week

Boris have shared "Beyond Good and Evil," the second single off their anticipated new album W, and this one was inspired by the devastating history of Hiroshima, hometown of Boris member Wata, who handles lead vocals for this entire album. "There is a vast magnitude in a huge mushroom cloud and in decaying ruins," the band says. "We feel both the sadness and beauty of these things at the same time; that is who we are. This video was made from the perspective of a mushroom cloud."
MUSIC・6 DAYS AGO
iheart.com

Thomas Rhett released the latest taste of one of his upcoming albums. The “Slow Down Summer” artist debuted two new tracks from Where We Started, the first of two albums slated to release this year. Rhett’s sixth studio album is one that has “a dose of a little...
THEATER & DANCE・9 DAYS AGO
Pitchfork

Lavender Country—widely acknowledged as the first openly gay country artist—is releasing his sophomore album Blackberry Rose and Other Songs and Sorrows From Lavender Country on February 18 via Don Giovanni. Today, Lavender Country has shared a new version of the song “I Can’t Shake the Stranger Out of You.” Hear it below.
MUSIC・12 DAYS AGO
The Quietus

Jack White has shared a new song from his upcoming album called “Love Is Selfish.” The project, called Entering Heaven Alive, is the second of two to be released this year. White also directed the video for “Love Is Selfish,” which was released on Friday (January 14th).
MUSIC・7 DAYS AGO