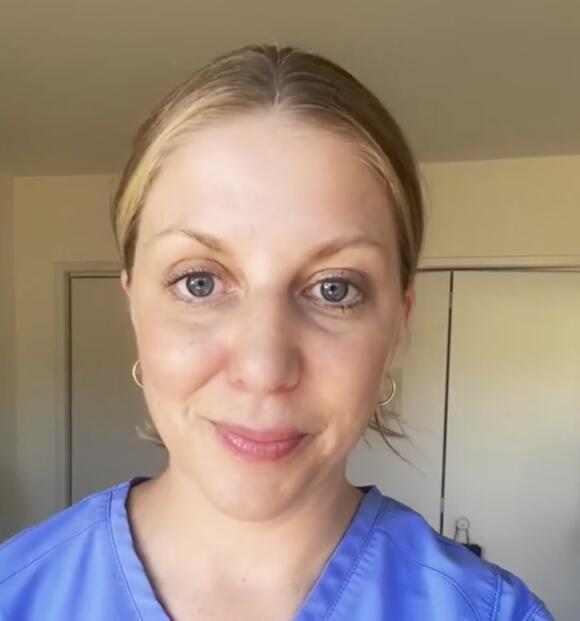 A hospice nurse from California has revealed what most people say before they die.

Julie, who goes only by her first name on social media, has been working as a hospice nurse in Los Angeles for the past five years and has been educating people about death on TikTok .

Hospice care is a type of health care that focuses on relieving a terminally ill patient’s pain and symptoms and attending to their emotional and spiritual needs at the end of life.

“I love educating patients and families about what to expect with hospices and what to expect with the specific disease they are dying from,” Julie told The Sun. “I also really like giving the patient and family some comfort knowing we will be there to manage their symptoms.”

She said she has been doing this kind of work for the past 14 years as she was an ICU nurse for nine years before moving to hospice care.

Recently, the registered nurse posted a video describing things that happen to most people right before they die, including changes in a person’s skin colour, breathing pattern, and secretions from body parts.

She said that though these things may appear unusual, they are absolutely typical at that stage.

“There is something most people say before they die, and it’s usually ‘I love you’ or they call out to their mum or dad – who have usually already died,” Julie said.

She added that it is hard to generalise what happens when people die as each individual is unique in their own way.

However, she said, if someone is dying of natural causes in hospice care, most people have similar symptoms during the “actively dying phase”.

“The symptoms of the actively dying phase include changes in consciousness, changes in breathing, mottling and terminal secretions,” Julie said. “These are normal and not painful or uncomfortable.”

She added: “Our bodies take care of ourselves at the end of life – the less we intervene, the better.”

The nurse also addressed “some assumptions” that people make about hospice care, including that morphine makes people die faster and that everyone at a hospice dies immediately. These were false, she said.

“Another one that’s completely not true is that hospices kill people,” she added.

This story is somewhat true but in my experience when Hospice was with my Mother they advised me to stop giving her water and food to "help her journey", which I totally ignored and by the Grace of God, my Mother came out of it stronger than ever and continues to be so strong, it's AMAZING!!!!!

My mother was unconscious while dying, then at the last minute opened her eyes, said, she is so beautiful! I am convinced she saw Mary, our blessed mother who she was very dedicated to. Believe in God!

I was a Hospice nurse and the person dying usually handles death better then the family, until the end when the family is exhausted from caring for them. The families don't receive the personal support they need to manage end of life never mind the emotional part. Not everyone can handle 24,7 care for months, sometimes.

Blessings of a hospice nurse: Check your pride at the door

Wendy Young knew she wanted to be a hospice nurse before attending nursing school. She has been with Frontier Hospice for nearly five years and serves as a case manager in the Oklahoma City metro. “Everybody said, ‘Oh, you’re going to change your mind. You’re going to learn about all...
OKLAHOMA CITY, OK・2 DAYS AGO
BBC

Harlow hospice gets creative over staffing amid nursing shortage

A hospice is changing how it recruits amid a national shortage of nurses. St Clare's Hospice in Harlow, Essex, said a combination of specialist staff due to retire and Covid pressures had made staffing more difficult. It said it had "got creative" to attract and use other healthcare workers, including...
HEALTH SERVICES・1 DAY AGO
The Independent

Father dying of Covid regrets not getting vaccine in heartbreaking texts

Shortly before dying of Covid-19, a father in Los Angeles texted family members to express his regret over not getting vaccinated.Christian Cabrera, 40, tested positive for the coronavirus around Christmas. Not long afterward, he was in an emergency room with pneumonia in both lungs.“I can’t breathe again,” he texted his brother, according to KTLA. “I really regret not getting my vaccine. If I can do it all over again I would do it in a heartbeat to save my life. I’m fighting for my life here and I wish I [had] gotten vaccinated.”On 22 January, Mr Cabrera died. His family...
PUBLIC HEALTH・1 DAY AGO
The Independent

A Covid patient whose wife sued a hospital to win him more time on a ventilator, has died, his family says.Scott Quiner was 55. He died on Saturday at a hospital in Houston, Texas, the family’s lawyer Marjorie Holsten said, and was on a ventilator at the time. The lawyer did not elaborate on how Mr Quiner died.“On behalf of the family of Scott Quiner, I would like to thank the public for the outpouring of love and support during this difficult time,” Ms Holsten said in a statement.“The family now requests privacy while they grieve the loss of...
PUBLIC HEALTH・2 DAYS AGO

COVID-19 cases are peaking in Arizona due to the more contagious omicron variant, with over 27,000 new cases being reported Saturday. Cindy Smith works in the COVID-19 ICU at Valleywise Health and has spent 30 years as a nurse. She says that before the delta variant began spreading in Arizona, there was hope in her hospital.
ARIZONA STATE・4 DAYS AGO
mynews13.com

'I just watched too many people die': ICU nurse says being overworked is hurting health care workers, not the vaccine mandate

ORLANDO, Fla. — The vaccine mandate that was upheld by the U.S. Supreme Court Thursday will apply to at least 60,000 hospital workers in Central Florida. Like ICU nurse Megan Jones, who doesn’t get to bring her dog out to the dog park very often because she’s pretty busy nowadays.
HEALTH・12 DAYS AGO
The Independent

The rant of a travel nurse has gone viral after she spoke about her experience working in hospitals around the country during the pandemic. Alexis Hinkley posted the video on TikTok on 22 December, but the post is still garnering attention. As of 24 January, the video had been viewed 10.7 million times. “One thing that I wish more non-medical people understood when they bring up the survival rate of Covid is that no beds in the hospital means no beds,” Ms Hinkley said in the video. “No beds for your stroke, no beds for your heart attack, no...
BEHIND VIRAL VIDEOS・2 DAYS AGO
Radar Online.com

Bob Saget’s suspected cause of death has been revealed and cops believe the late comedian “suffered a heart attack or a stroke” due to the circumstances in which they found his body. Article continues below advertisement. According to Daily Mail, authorities that arrived at Saget’s Ritz-Carlton hotel...
CELEBRITIES・15 DAYS AGO

Luigi Cossellu reportedly arrived at the hospital already in serious condition, something an official blamed on people's denial of the existence of COVID.
PUBLIC HEALTH・2 DAYS AGO
The US Sun

YOUTUBER Melanie Ham has died at age 36 after battling cancer, her family has revealed. Ham's husband shared a tribute to the crafting YouTuber's social media platforms, saying she "fought until the end." The 36-year-old's death on January 12 came just nine days before the couple's 16-year anniversary, her husband...
CELEBRITIES・1 DAY AGO
WDEF

CHATTANOOGA (WDEF) – A Nurse practitioner has been sentenced to 14 years in prison in Chattanooga. 64 year old Mark Daniel Allen was convicted last fall of running a drug-involved premises and distributing controlled substances. Prosecutors said he handed out around 15,000 0xycodone pills to three women with whom...
CHATTANOOGA, TN・5 DAYS AGO
Fortune

Doctor predicts half the world will have omicron within a month, but WHO warns it’s ‘dangerous’ to assume it’s the end of the pandemic

Never miss a story: Follow your favorite topics and authors to get a personalized email with the journalism that matters most to you. The relentless global surge of the Omicron coronavirus variant may infect half of the world’s population by March 2022, according to a prominent scientist writing in a major medical journal.
PUBLIC HEALTH・1 DAY AGO

A co-worker told Jeff Sales he "didn't look great." Hours later, he was diagnosed with COVID-19 and his heart failed.
PUBLIC HEALTH・1 DAY AGO
Daily Mail

A YouTube star who was placed in a coma for two months while battling Covid has revealed how she dreamed her body was 'floating down a river' while comatose and that she loves 'mundane moments' now that she is well. Grace Victory, 31, from High Wycombe, who has built a...
TV & VIDEOS・2 DAYS AGO
Newsweek

'After 26 Years, I Discovered The Truth About My Marriage'

We got engaged to be married in June '95 and moved the wedding forward because I was pregnant.
RELATIONSHIP ADVICE・3 DAYS AGO
The Independent

What is lipoedema? The condition affecting one in 10 women

Former Love Island contestant Shaughna Phillips has opened up about her struggle with lipoedema in a bid to raise awareness of the condition.Taking to Twitter on Monday 24 January, Phillips shared a picture of herself on holiday in Dubai in 2017, revealing that she was suffering from an eating disorder at the time.She said the photograph is a “clear example of what lipoedema looks like”. Recalling how the condition affected her life before she was diagnosed, Phillips said she was restricting her diet and excessively exercising in an attempt to make her legs look smaller.In this picture I was struggling...
CELEBRITIES・1 DAY AGO
snntv.com

BRADENTON- A Nurse, army veteran and father of 4 dies of COVID-19 after spending two years treating COVID patients. 47-year-old Jeff Sales Dedicated his life to helping others. “Here are both of his uniforms back here,” Son Brayden Sales said. The husband and father of 4 joined the army...
BRADENTON, FL・2 DAYS AGO
Insider

What low blood pressure means and when it can be dangerous

Low blood pressure means a reading of 90/60 mm Hg or lower and is not a cause for concern unless you experience symptoms like dizziness and fainting.
DISEASES & TREATMENTS・2 DAYS AGO
Wyoming News

Depression Might Predispose You to Believe COVID Vaccine Lies

MONDAY, Jan. 24, 2022 (HealthDay News) -- Misinformation about COVID-19 vaccines abounds, and people with depression are more likely than others to fall for it, a new study finds. "One of the notable things about depression is that it can cause people to see the world differently — sort of the opposite of rose-colored glasses. That is, for some depressed people, the world appears as a particularly dark and dangerous place," said lead author Dr. Roy Perlis. He's associate chief of research in the psychiatry...
MENTAL HEALTH・2 DAYS AGO
Shine My Crown

Candace Owens Blasts Hospital Vaccine Mandate: 'If You Have Full Blown AIDS, the Flu and COVID—Hospitals Will Treat You'