Adele debuts new track ‘To Be Loved’ one day before album release, leaving fans ‘in tears’ 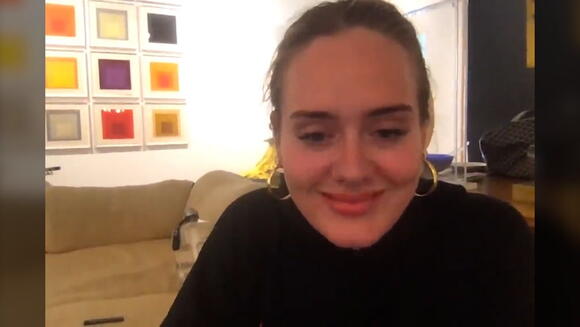 Adele has released a new video performing her new track “To Be Loved” from her upcoming album 30 .

The 33-year-old singer posted a video of herself singing the song on Thursday (18 November), leaving fans in tears.

“To be loved and love at the highest count / Means to lose all the things I can’t live without,” the artist, whose full name is Adele Laurie Blue Adkins, sings.

Fans have said they are “wrecked” after hearing the “raw vocals” in the new video.

“Adele is singing some major truth in To Be Loved!!!! I am so wrecked by this song. So beautiful,” wrote one person.

Another fan added: “OMG. This is talent and those lyrics. You can feel the pain. She is simply superb.”

Manchester-based singer The Melaninja wrote: “Each lyric on ‘To Be loved’ by Adele resonates so much it felt like my heart was pierced over and over again with every second of listening.”

“Then by the time she finished singing I was swimming in a sea of my own tears. F****** beautiful.”

Reviewers across the media have shared their verdicts for 30 , and it has been heralded as the singer’s best work by several outlets, with many praising the songwriting craft and musicianship.

In a four-star review from The Independent , Annabel Nugent wrote: “Lyrically, 30 is candid. Adele has always been forthright – every bad feeling you’ve felt, she has confessed to feeling too – but there is a new immediacy here.

“Earlier songs spoke in platitudes and broad strokes. They projected human emotions onto the natural world – a shallow valley, a shelter in the rain, the river running nearby where she grew up. But the singer of 30 is more literal. Adele unmediated. Adele unfiltered. Adele opening her Notes app at 3am mid-anxiety attack and jotting down whatever comes to mind.”

In devastating news for many Adele fans, the award-winning singer has been forced to reschedule her Las Vegas residency, which was due to start this weekend (21 January 2022). Adele took to social media to share the news, posting a video of herself in tears as she explained the reasoning behind the last-minute cancellation. She tweeted, “All dates will be rescheduled,” before promising “More info coming soon.”
CELEBRITIES・7 DAYS AGO
Daily Mail

Avril Lavigne reveals her seventh studio album titled Love Sux will be released on February 25th... as she shares a snippet of a new track

Avril Lavigne has announced that her upcoming seventh studio album, entitled Love Sux, will be released on February 25. The 37-year-old singer's project will see her returning to her roots as a pop punk artist and will also feature contributions from artists such as Travis Barker and Blink-182's Mark Hoppus.
MUSIC・15 DAYS AGO
Rolling Stone

FKA Twigs embraces a classic throwback aesthetic in the new music video for “Jealousy,” a track featuring Rema off her recent mixtape, Caprisongs.  The video, directed by Aidan Zamiri, has a late-Eighties/early-Nineties feel, jumping between sequences of FKA Twigs performing the song and dancing alongside a small troupe, and black-and-white footage of Rema delivering his verse solo. The choreography in the clip was handled by Twigs’ regular collaborator, Kash Powell.  “Jealousy” is the latest Caprisongs track FKA Twigs has released a music video for, following “Meta Angel” and “Tears in the Club,” her collaboration with the Weeknd. Caprisongs was released Jan. 14...
CELEBRITIES・2 DAYS AGO
travelawaits.com

Adele Cancels All Vegas Shows One Day Before Residency Debut

The most anticipated new residency in Las Vegas in years won’t be happening, at least for now. In a tearful message on Twitter and her other social media channels, Adele canceled her entire run of 24 shows on the eve of its debut, citing COVID issues and production problems.
LAS VEGAS, NV・7 DAYS AGO

Madonna teased the idea of a stadium tour with Britney Spears on Instagram Live Wednesday. When asked if she will ever do a world tour again, Madonna responded, “Hell yeah. I have to. Stadium baby. Me and Britney, what about that?” “Not sure if she’d be into it, but it would be really cool. We could like, reenact the original [kiss],” Madonna continued, referencing her and Britney’s famous smooch at the 2003 MTV Video Music Awards. Spears hasn’t performed live since wrapping up her “Britney: Live in Concert” tour in October 2018, but now that the singer has been released from her conservatorship...
CELEBRITIES・2 DAYS AGO
loudersound.com

Shinedown will release their seventh album, Planet Zero, on April 22 via Atlantic Records. And for those who can’t wait to hear what the Jacksonville, Florida quartet have in store for the world on that date, the band have kindly released the album’s title track as a teaser for what’s to come.
JACKSONVILLE, FL・2 DAYS AGO
GMA

Thomas Rhett is looking back on the anniversary of one of his biggest hits, his 2015 single, "Die a Happy Man."
MUSIC・2 DAYS AGO

South Korean hip-hop trio Epik High will are set to release a new studio album before their upcoming appearance at Coachella. Earlier this week, Coachella announced that the K-hip-hop group would be part of the festival’s comeback lineup. Epik High – which comprises Tablo, Mithra Jin and DJ Tukutz – will be performing on Coachella 2022’s two Friday dates, both of which will also mark the final dates in Epik High’s previously announced North American tour.
MUSIC・14 DAYS AGO
EW.com

Fans hoping to see Adele perform in Las Vegas are going to find themselves chasing pavements, at least for the time being. In a heartfelt video posted to Instagram on Thursday, the day before her Sin City residency was supposed to kick off, the singer took announced that she has been forced to postpone the show.
LAS VEGAS, NV・8 DAYS AGO
loudersound.com

Ambient composer Roger Eno has releaaed a video for The Turning Year, which you can watch below. It's the title track from Eno's upcoming album which will be released thrpugh Deutsche Grammophon on April 15. “The Turning Year is like a collection of short stories or photographs of individual scenes,...
MUSIC・11 DAYS AGO
edmidentity.com

Bob Moses is gearing up for the release of The Silence In Between with their latest single “Love Brand New” and tour details. From releasing memorable tunes to playing sets at unique venues, GRAMMY Award-winning duo Bob Moses has left a lasting impression on the dance music scene. After a massive run of shows with the return of live music events around the world and teasing that big news was coming in the new year, they’ve held true to their word with the initial details for their forthcoming album The Silence In Between.
MUSIC・13 DAYS AGO

Jenny Hval has made her next move in the pandemic and announced the release of her upcoming album, Classic Objects, set for a release in March 11 of this year. She also took the time to announce the video release of her latest single, “Year Of Love”. “For me, this experience was very troubling,” says Hval, who explains the song was based on a proposal that occurred during a performance of hers,. “It confronted me with the fact that I am also married. What does that detail from my private life say about me as an artist? ‘Year of Love’ asks, who am I as an artist? Do my private actions betray my work and voice?”. The song has a very folk-funk tune, very easy going and lots of percussion. The video itself is Hval in pose in different CGI rooms, either laying down, sitting or on her phone. It almost looks like a camera hack of an old video game. Hval and the directors described the video as, “A sense of loss and joy intertwines in a world of disconnected rooms. The artist inhabits these rooms. She is frozen in time, space, and mid-vowel.” Watch the video, see the tracklist for Classic Objects and take a look at the tour dates below.
MUSIC・9 DAYS AGO
guitargirlmag.com

Singer-songwriter Sofia Mills today releases a new song “Wish I Would” and gives details of her much-awaited debut album BABY MAGIC. The song is out today and preorders for Baby Magic are available. The album will also have a vinyl release at a TBD date. Listen to “Wish...
MUSIC・1 DAY AGO
Fox News

Even in her final days, Betty White was grateful for her fans. The comedy icon died at age 99 on Dec. 31, 2021, just weeks before she would have turned 100. Since her passing, fans have participated in the Betty White Challenge by donating to local or national animal shelters, rescues or agencies in the star's name — an homage to her famous adoration of animals.
CELEBRITIES・7 DAYS AGO
wxhc.com

The Scorpions celebrate the joy of rocking their fans like a hurricane in the official video for the title track of their forthcoming studio album, Rock Believer. The clip, which premiered this week at the veteran German hard rockers' YouTube channel, features new scenes of The Scorpions performing "Rock Believer" in a studio, mixed with archival footage of the band playing at a variety of major concerts and behind-the-scenes footage of the group interacting with fans and having fun offstage.
MUSIC・9 DAYS AGO
stereoboard.com

Warpaint have announced their first album in six years. The long-awaited follow-up to 'Heads Up' is called 'Radiate Like This' and will arrive on May 6. As a preview, the band have released the track Champion, which is full of airy atmospherics, entrancing vocals and circulating beats. It follows their 2021 comeback single Lilys.
MUSIC・2 DAYS AGO
mxdwn.com

Soak Announce New Album If I Never Know You Like This Again For May 2022 Release, Debut Lush New Song And Video “Last July”

Rough Trade Records and SOAK announced their upcoming album release, If I Never Know You Like This Again, will be slated for a May 2022 release.They released their latest son “Last July” which features SOAK and their partner. “I hate the idea of getting older and forgetting, or having a family and not being able to perfectly explain a memory or a feeling. I always want to remember exactly how I felt at a certain moment,” they explain, as the album is mentioned to be made of up “Song-Memories”. The album was, of course, written throughout the pandemic, which was a symbol of beautiful work coming out of a time when life was slow and uneventful for many. “Last July” was a song about a lost love, with a classic 90’s rock tune with a music video that was almost pulled out of the many TV shows that reminisce on the progression of relationships in a single video montage. There were moments of bliss and happiness and also moments of arguing and loneliness, what many love relationships are made of. However, the chemistry between SOAK and their partner is undeniable. Watch the video and check out the album tracklist below.
TV SHOWS・2 DAYS AGO
The US Sun

ADELE has cancelled her Las Vegas residency less than 24 hours before the first show was due to kick off. The British pop superstar, 33, posted a teary video on Instagram explaining why the highly-anticipated gigs will not be taking place - insisting she and her team "ran out of time" due to "delays and Covid."
LAS VEGAS, NV・8 DAYS AGO
People

Ben Affleck Says His Daughters Could Hardly Speak When They Met Taylor Swift: 'They Clam Up'

Despite having a famous father, Ben Affleck's kids still get starstruck by their favorite celebrities. On Monday's episode of The Kelly Clarkson Show, the 49-year-old recalls the moment he took his two daughters to meet Taylor Swift, sharing that they were so starstruck they could barely speak. The Argo star...
CELEBRITIES・25 DAYS AGO