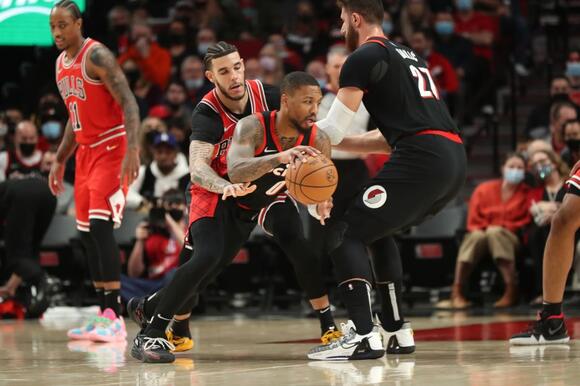 The Portland Trail Blazers picked up a much needed win over the Chicago Bulls in Oregon on Wednesday night.

Damian Lillard had been questionable for the game after missing their last contest, but was active and played 40 minutes scoring 22 points, grabbing four rebounds and dishing out ten assists.

Zach LaVine, Lonzo Ball and DeMar DeRozan combined to score 69 points for the Bulls, but their performances were not enough to get the win.

Damian Lillard has had a tough year this season, as he has been dealing with an abdominal injury. He has only played in 29 of the Trail Blazers' games this year. The abdominal issue was definitely serious, and there's no doubt that it has affected Damian Lillard's performance this season. It was reported earlier this month that Damian Lillard could end up missing the rest of the season due to this issue.
NBA・1 DAY AGO
Sportsnaut

With the 2021-22 NBA season in full swing, basketball fans are putting on their jerseys and filling up arenas around
NBA・15 HOURS AGO
ESPN

Damian Lillard, content to 'make decisions that suit you for the long haul,' slowly works his way back to Portland Trail Blazers' lineup

During the Tokyo Olympics last summer, when Damian Lillard's abdominal injury flared up, Jrue Holiday suggested it was time for surgery. Lillard finally took his fellow Olympian's advice and had the procedure Jan. 13. The Portland Trail Blazers' star point guard spoke to reporters Saturday for the first time since the injury sidelined him on Jan. 3.
NBA・1 DAY AGO
ClutchPoints

Portland Trail Blazers star Damian Lillard didn’t hold back his thoughts on talks that the Rip City squad could take a tanking approach amid his absence due to injury. Lillard recently underwent surgery to address his abdominal issue, and he is expected to be evaluated after six to eight weeks. That means the Blazers star will miss a huge chunk of the campaign, putting the team in a dire situation of whether to tank the season or continue fighting for the playoffs since they still have a chance.
NBA・1 DAY AGO

Damian Lillard injury update: Trail Blazers star 'not in a rush' to return to the court following surgery

When Portland Trail Blazers superstar Damian Lillard underwent abdominal surgery on Jan. 13, the team said he would be re-evaluated in 6-8 weeks, and while that timeline hasn't changed, Lillard recently said he's in "no rush" to get back to the court. While talking to media Saturday, Lillard spoke about...
NBA・1 DAY AGO
FastBreak on FanNation

Can C.J. McCollum Save The Trail Blazers Season?

Ben Stinar and Haley Jordan sat down to talk about the Portland Trail Blazers in the latest episode of Stinar For 3.
NBA・8 HOURS AGO
FastBreak on FanNation

The Golden State Warriors lost to the Indiana Pacers at home on Thursday night, and after the game Steph Curry spoke to the media.
NBA・2 DAYS AGO
USA TODAY

Luka Doncic has many of the same flaws as Russell Westbrook but gets far less criticism. He may not be able to outrun it much longer.
NBA・2 DAYS AGO

According to The Athletic’s Shams Charania, the Brooklyn Nets have agreed to find big man Paul Millsap a new team
NBA・2 DAYS AGO
USA TODAY

Chicago Bulls coach Billy Donovan was not pleased by a flagrant foul committed by the Milwaukee Bucks' Grayson Allen against guard Alex Caruso.
NBA・2 DAYS AGO
95.7 The Game

Warriors coach Steve Kerr took the blame for his team’s 121-117 overtime loss to the Indiana Pacers, who were without four of their top five scorers.
NBA・2 DAYS AGO
FastBreak on FanNation

Grayson Allen got ejected during the game between the Chicago Bulls and Milwaukee Bucks for a flagrant foul on Alex Caruso.
NBA・2 DAYS AGO

#The Chicago Bulls
FastBreak on FanNation

Giannis Antetokounmpo and the Milwaukee Bucks defeated the Chicago Bulls on Friday evening.
NBA・1 DAY AGO
The Spun

The Lakers are desperate for help. It appears it’s on the way in the form of none other than Anthony Davis. Davis has been upgraded to questionable and has a chance to play when the Lakers battle the Miami Heat on Sunday. AD is officially a game-time decision. Davis,...
NBA・1 DAY AGO
FastBreak on FanNation

Klay Thomson will be out due to rest on Friday night in the game between the Houston Rockets and Golden State Warriors.
NBA・2 DAYS AGO

Milwaukee Bucks guard Grayson Allen became a villain in the eyes of the basketball world once again this week after he committed a violent foul on Chicago Bulls fan-favorite Alex Caruso. At the time, Allen received a flagrant 2 foul for the reckless play that resulted in a fractured wrist...
NBA・12 HOURS AGO
FastBreak on FanNation

Ja Morant of the Memphis Grizzlies tweeted about the Los Angeles Rams and Tampa Bay Buccaneers game.
NBA・10 HOURS AGO
FastBreak on FanNation

Rajon Rondo has been ruled out for Saturday's game between the Oklahoma City Thunder and Cleveland Cavaliers.
NBA・1 DAY AGO