Patriots vs. Falcons: Three to Watch on Offense vs. Atlanta 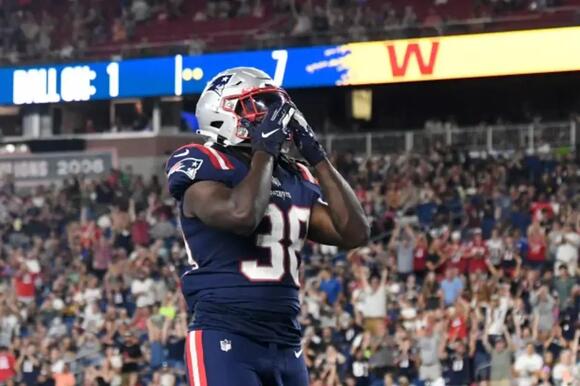 The New England Patriots and Atlanta Falcons are set to meet for what promises to be an interesting matchup in Week Eleven of the 2021 NFL Season.

The Patriots travel to Atlanta, Georgia as they will take on the 4-5 Falcons at Mercedes-Benz Stadium at 8:20pm ET on Thursday, November 18. At 6-4, the Pats are hoping to remain in the win column, seeking their fifth straight victory. In the process, they would remain in contention for a spot in the 2021 postseason.

Though many Patriots players are expected to garner some attention during Thursday’s matchup, here are three players on offense that might raise an eyebrow when the Pats take the field against the Falcons.

Will Kendrick order the ‘Code Run?’ The question may be a relevant one when it comes to New England’s offensive strategy against the Falcons on Thursday. Bourne certainly made the most of his time on the field during Sunday’s matchup with the Cleveland Browns. In just 29 offensive snaps, Bourne caught four passes for a career high 98-yards and one touchdown. In the process, he set his career high in receiving yards. He also demonstrated an impressive ability to effectively carry the ball for significant yardage. He finished Sunday’s game with 43 yards rushing on three carries. However, with Damien Harris making his return, the Patriots should look to both he and Rhamondre Stevenson to take the majority of the carries. Therefore, Bourne may be more effective this week as a pass catcher in the ‘Z’ receiver role. The Falcons secondary allows 246.2 yards per game, which ranks 16th in the league. As a collective unit, Atlanta’s defense has logged just three interceptions. As a result, Bourne may find some success as a target in the Patriots short passing game. Still, as his Week Six, 75-yard touchdown showed, Bourne can break for big yardage if given the chance.

After rushing for a carrier-high 100 yards against Cleveland on Sunday, the rookie running back is likely to be worth the watch in Week 11. For Thursday’s matchup with the Falcons, Stevenson possesses the necessary intangibles to be an effective option in both situational runs, as well as receiving out of the backfield. He is a physical, powerful runner, yet athletic enough to make tacklers miss in short yardage. The former Oklahoma Sooner nicely blends power and athleticism into his running style. That two-pronged attack should continue in Atlanta against a Falcons’ defense that struggles to stop the run. Atlanta is presently allowing 122.1 yards per game, which ranks 21st in the league. They deploy a base 3-4 defensive set, with nose tackle Tyeler Davison between both Grady Jarrett and Mike Pennel. Collectively, they have had some difficulty stopping physical runners. While Damien Harris should be expected to get his share of carries, Stevenson’s physical running style could be a productive offensive weapon on Thursday.

In a move that raised a few eyebrows prior to kickoff, Onwenu was used as a rotational reserve on Sunday, taking 26 offensive snaps, while also serving as eligible tight end on several occasions. Despite not getting the start, he played a key role in an overall strong performance for the Patriots offensive line. At his best, Onwenu has shown a consistent and impressive ability to overwhelm defenders in the run game, while anchoring well to protecting the passer. It is a rare occasion on which he is easily bypassed on a pass block. No matter how he is deployed on Thursday, Onwenu should provide some much needed prowess in both run and pass protection. In 2021, Atlanta has typically been unable to generate much pressure on the passer with just 11 sacks all season, while ranking last in the league in sacks per pass attempt. That should allow the Patriots offensive line to carry the momentum it generated Sunday against Cleveland, into this matchup with the Falcons. Whether it be in a starting or reserve role, Onwenu figures to factor prominently into that game plan.

The New England Patriots are currently set up well with two young quarterbacks, Mac Jones and Bailey Zappe, who both have winning records as starting quarterbacks during their short tenure in the league.
5 HOURS AGO
Whiskey Riff

Arian Foster might've fooled some NFL fans, but New England's Matthew Judon wasn't among them. No, they don't really think the league is "rigged.''
1 HOUR AGO
Patriot Country

Houston recently wanted a second-round pick for Brandin Cooks - which the still-receiver-needy Dallas Cowboys at the time were pretty much willing to give. Would the New England Patriots want in to "win the deal''?
HOUSTON, TX・10 HOURS AGO
Popculture

An MLB pitcher who was selected to play in the All-Star game in 2015 is calling it a career. On Monday, Darren O'Day went to Twitter to announce his retirement from baseball after being in the league for 15 seasons. This comes after O'Day spent the 2022 season with the Atlanta Braves.
FLORIDA STATE・2 DAYS AGO
Patriot Country

Though Jerod Mayo may be headed for a pay raise in 2023, his positional label remains in question.
43 MINUTES AGO
Patriot Country

Mac Jones had a better season than the Ravens' quarterback. For that matter, so did Bailey Zappe.
BALTIMORE, MD・6 HOURS AGO
Patriot Country

Two players from the New England Patriots will draw significant interest this offseason when they become free agents.
2 DAYS AGO
Patriot Country

The Patriots are expected to be among the NFL's best-situated teams when it comes to financial flexibility and draft capital.
2 DAYS AGO
Patriot Country

Brady played 23 seasons in the NFL, 20 of which came as a member of the New England Patriots.
MICHIGAN STATE・1 DAY AGO