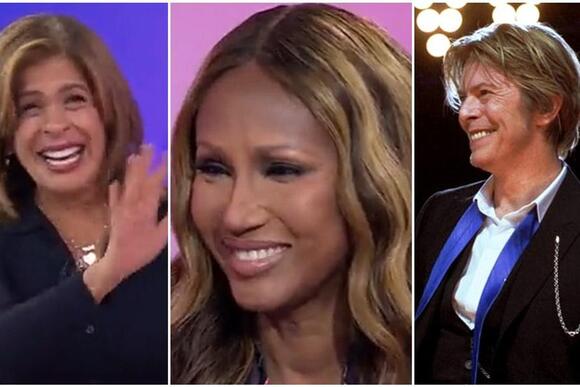 It's hard to believe that it's been nearly six years since the world lost David Bowie. One of the most tragic aspects of his death at 69 is he was in the middle of a career resurgence after releasing the critically acclaimed albums "The Next Day" (2013) and "Blackstar" (2016) just days before his passing.

In a rare, revealing interview on "The Today Show," Bowie's widow, retired supermodel and entrepreneur Iman, 66, discussed why it's taken her six years to properly grieve the loss.

The couple were married in 1992 and have a 21-year-old daughter, Lexi Jones, together. Bowie and Iman both have a child from previous marriages.

Iman finally began to grieve properly in 2020 after returning to the couple's estate during lockdown. In the intervening years, she had neglected her feelings to focus on helping her daughter through the monumental loss.

"I had a daughter who was a teenager when her father passed away, so I was really more concentrated in helping her go through her grief," Iman said on Today . "But I thought, oh yes, I did go through my grief, but I actually did not.

"Last year, I went to my house estate, this beautiful property that I haven't spent time there since my husband passed away, and there I was stuck for the year and I was forced to deal with it," she said. "All of a sudden grief knocked on the door and became a companion. And I went through all of it, and now it is the joy that I remember."

“This was truly the love of my life.” @hodakotb speaks with supermodel, philanthropist and entrepreneur @The_Real_IMAN about her marriage with the late David Bowie and the new fragrance she is releasing in his honor.pic.twitter.com/VPM2xS6JG1

Iman is happy that she's reached a point where she can finally embrace the joyous aspects of her 24-year marriage to Bowie.

"I think there are days that are harder than others," she said. "I don't think it will ever go away, but the acceptance of it, and the remembrance of the joy, rather than saying every memory that, 'Oh, I wish he was here, I wish we could experience this together.' Now I remember the 26 joyful years I had with my husband."

Iman had an immediate response when her daughter asked if she'd ever get married again.

"No," she told Hoda Kotb. "People say to me when they talk, 'Oh I loved your late husband,' and I said, 'He's not my late husband, he's my husband,' so that's how I feel about it. This was truly the love of my life, and I just wait until I meet him again."

“At the end of our days, the only thing we will have, if we are lucky, is our memories.” @The_Real_IMAN brings @hodakotb to tears discussing David Bowie.pic.twitter.com/irikivJCLU

Bowie isn't around any longer, but Iman cherishes the memories the two were able to create and holds them close to her heart.

"I think at the end of our days, the only thing we will have if we are lucky is our memories," she said to a crying Kotb. "That's the thing that we will have and will sustain us after the person passes away."

Back in 2016, W Magazine had Zendaya, Willow Smith, and Kiernan Shipka record this video tribute to Bowie shortly after his death. It was recently re-shared in honor of his 75th birthday, and the internet dragged it to hell and back. Many people pointed out that the actors are clearly...
MUSIC・8 DAYS AGO
Popculture

'Today': Hoda Kotb Reveals What the 'M' on Her Necklace Stands For

Hoda Kotb shared the sweet meaning behind her "M" necklace In a recent segment on Today, opening up to her co-host Jenna Bush Hager. "'M' stands for Mom," she explained before launching into the meanings behind the other two parts of her three necklaces that she stacks. "I have 'Hailey' and 'Hope' on (one of them). Then I have an 'I love you Mama' on this one," she said. "All of them are my girls."
CELEBRITIES・1 DAY AGO
wiltonbulletin.com

Bowie’s lost album finally arrives 20 years later. “I think the potential of what the internet is going to do to society, both good and bad, is unimaginable,” David Bowie told Jeremy Paxman of BBC Newsnight during an interview in 1999. “I think we’re actually on the cusp of something exhilarating and terrifying.”
MUSIC・10 DAYS AGO

(hennemusic) David Bowie's social media team are streaming an official playlist in honor of the late rocker's 75th birthday this month. "For those of you who don't do audio streaming, we've curated the David Bowie 75 Official Playlist," says the team. "Enjoy a whole load of Bowie's most celebrated tracks and music videos from across the decades all in one place for your sound + vision pleasure."
MUSIC・7 DAYS AGO
starkinsider.com

David Bowie remixes have arrived on Peloton… but first…. There’s no shortage of bad news for Peloton Interactive, Inc. these days (NASDAQ: PTON) — not to mention the markets and overall global economy. After growing exceedingly fast during the pandemic, ramping from the beginning of 2020, the company has seen demand soften for its smart connected bikes and treadmills through 2021; in dramatic fashion if you happen to follow the stock. Now Peloton is hiking prices, tacking on delivery charges and various fees and has, according to reports, hired McKinsey to help make decisions related to staffing and other cost-saving measures.
THEATER & DANCE・9 DAYS AGO
TODAY.com

Hoda Kotb and Jenna Bush Hager are encouraging parents to play. On TODAY Thursday during "Hoda & Jenna," Hoda revealed to co-host Jenna Bush Hager that she shares an adorable nighttime routine with kids, Haley and Hope. Hoda and her fiancé, Joel Schiffman, adopted their first daughter, Haley, 4, in...
THEATER & DANCE・19 HOURS AGO
spectrumnews1.com

LOS ANGELES (CNS) — Actress Kathryn Kates, who appeared in episodes of “Seinfeld” and “The Many Saints of Newark,” has died. She was 73. Kates died of cancer on Saturday, her agent, Ben Jordan, told USA Today on Tuesday night, adding a memorial service is being prepared for her in the spring.
LOS ANGELES, CA・1 DAY AGO

Howard Stern has slammed Joe Rogan in the past for spreading misinformation about the COVID-19 vaccine, but that doesn’t mean Stern wants to see the controversial Spotify radio host shunned in public opinion. Speaking on his Sirius XM radio show this week, Stern said he doesn’t believe in censorship and expressed a level of admiration for Rogan’s podcast empire. “I don’t listen to Joe Rogan. I know Joe from 100 years ago,” Stern said this week (via Mediaite). “We’re no longer friendly. We were friendly at one point — I just knew him as the funny guy, as a comedian —...
CELEBRITIES・1 DAY AGO
Outsider.com

‘The Waltons’: Why Michael Learned Said She Never Stopped Acting

The Waltons was an iconic show for a number of years in the 1970s. Part of what made the show a hit for so long as the chemistry between the staff on the program. It was a family affair and folks who watched and loved the show saw that. One of the stars, Michael Learned, felt that same feeling while working on the show. In a recent interview, The Waltons star Michael Learned opened up about why she never stopped acting.
TV & VIDEOS・8 DAYS AGO
epicstream.com

Prince William was reportedly "reeling" after learning about Meghan Markle's bombshell interview. Prince William, together with Kate Middleton, has been maintaining a strong front amid all the issues and controversies hounding the royal family. As a matter of fact, the father of Prince George, Princess Charlotte, and Prince Louis was named as one of the most active members of the Firm after he managed to attend 108 of his 223 royal duties in flesh.
CELEBRITIES・16 DAYS AGO
People

Tyler Perry thinks the world needs a good laugh. The writer/director reprises his role as Madea in the forthcoming Netflix movie A Madea Homecoming, streaming Feb. 25. The new entry in the franchise comes after Perry claimed he was done playing the part while promoting the 2019 installment, A Madea Family Funeral.
MOVIES・9 DAYS AGO

When actor Michael McGreevey showed up to film on The Waltons in 1973, everyone welcomed him with open arms. Well, everyone except Ellen Corby, that is. As McGreevey shared with Judy Norton on her YouTube Series Behind the Scenes with Judy Norton, his time with the classic series was overwhelmingly positive.
MOVIES・1 DAY AGO
Upworthy

The first time a child sees their normally bearded dad without any facial hair can go a number of ways. Some kids cry and scream in terror, wondering who destroyed their father's face. Others stare in confusion, unsure of what to make of it.
KIDS・15 DAYS AGO
The Independent

A brand new Kanye West documentary shows footage of his mother warning him off becoming “too arrogant”.The controversial rapper’s career is profiled in a three-part series titled Jeen-Yuhs, which will be released on Netflix in February.Filled with footage of his rise from producer to successful rapper, and filmed in Chicago and New York, the documentary also focuses on West’s relationship with his mother, Donda.In a moment from 2001, West is visiting his mother in her Chicago home when he’s discussing his success after producing the Jay-Z song "Izzo (HOVA)".“I was thinking about something I was going to say to...
MUSIC・2 DAYS AGO
Distractify

While most people have a basic idea of who Hugh Hefner was and how his Playboy empire operated, the A&E docu-series Secrets of Playboy will shed a different light on the founder's legacy. Throughout the 10-part series, viewers will get to hear from some of Hef's former Playmate girlfriends, and...
RELATIONSHIPS・3 DAYS AGO
Insider

This TikTok gives a whole new meaning to the phrase, “I tested positive”.In a hilarious video that now has over 16 million views, TikToker Hannah Alexis Grace shared her boyfriend’s confused reaction to finding out she’s pregnant over text.The TikTok begins with screenshots from the couple’s conversation, with a voiceover saying “Here’s how telling my boyfriend I’m pregnant went.” Hannah tells her partner, Charlie, that she finally knows why she feels ill, and sends him a picture of a positive pregnancy test. His response? “Are you joking me”.He asks his girlfriend if anyone knows she’s positive, to which she responds...
RELATIONSHIP ADVICE・1 DAY AGO
Footwear News

Who Is Lori Harvey? What You Need to Know About Michael B. Jordan’s Girlfriend — the Style Influencer & Daughter of Steve Harvey

Michael B. Jordan has fallen in love — with Lori Harvey, to be specific. The “Creed” star revealed he was in a relationship with the style influencer this time last year. Since going public as a couple, both Jordan and Harvey have shared multiple romantic snaps together on social media. They’ve been linked since November 2020. In a June 2021 interview, Jordan’s girlfriend Harvey told Bustle: “We know there are people that love and support us and want to see us. So [we want to] give just enough, but keep the majority of it just for us. We’re trying to find...
CELEBRITIES・2 DAYS AGO
Essence

Zendaya's Parents: 17 Sweet Photos Of The Star With Her Mom And Dad

"I gotta give it up to my parents,” she said in 2016. “I’m really lucky to have the parents that I have." We stan Zendaya‘s ascension into superstardom. One minute she was the Disney kid with the right moves on the sitcom Shake It Up, now she’s an Emmy-winning A-lister who is part of one of the biggest box-office smashes in history (Spider-Man: No Way Home is already the sixth highest grossing film of all time). The girl is on fire.
FAMILY RELATIONSHIPS・19 HOURS AGO