Struggling Barcelona 'are ready to sell midfield star Frenkie de Jong for £75m with Man City a possible option', as the cash-strapped Catalans look to raise funds for boss Xavi to spend in the January window

Barcelona are ready to let Frenkie de Jong leave the Nou Camp for £75million in January, with Manchester City touted as a possible destination, according to reports.

The Catalan giants are hoping to rebuild from the rubble under new boss Xavi but are in a dire situation financially so they could be forced to push through player sales before they can bring in fresh recruits – with the new coach keen to revamp the squad.

And de Jong could be the first player out the door to raise funds, as reported by Spanish TV channel El Chiringuito, via the Sun, with Barcelona believing he represents their strongest chance of raking in the most money. 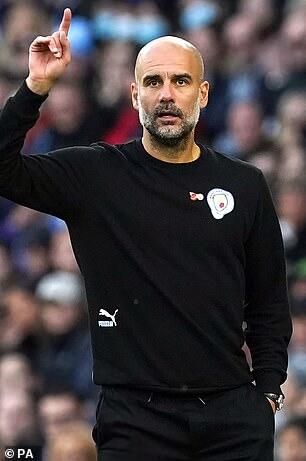 The report suggests Man City could be one of many interested parties in de Jong, with Pep Guardiola looking for a midfield player who can slot seemingly into his possession-based system.

Last month alternative reports claimed he was even willing to do a swap deal involving Raheem Sterling.

The 24-year-old only joined Barcelona in 2019 and was seen as a player the club could build their future around, and the Dutchman has since featured more than 100 times for the Catalans.

He has been a key player under previous boss Ronald Koeman and Xavi has already made it clear that he is a big fan of the centre mid.

'He is an extraordinary player, he is not afraid to receive the ball in difficult areas, to turn around.

'He needs time to adapt, it is another culture. It is a big club. Frenkie de Jong is Frenkie de Jong. It has nothing to do with it, neither with me, nor with Iniesta nor with Busquets.

'He is a very capable footballer, he is going to be the organizer of this generation from the Netherlands. He is very capable of doing it.

'He has a very good generation and he is going to achieve great things.'

A drone interrupted play at Brentford, we had a late, late winner at Old Trafford and Newcastle dug in for victory on an eventful afternoon
PREMIER LEAGUE・11 HOURS AGO
San Diego Union-Tribune

Manchester City travel to the south coast on Saturday evening to try and extent their lead at the top of the Premier League by beating Southampton.Saints held Pep Guardiola’s men to a goalless draw back in October but today’s visitors have been in scintillating form in recent months, winning their last 12 consecutive league fixtures and building up a lead of 11 points to second-placed Liverpool and 14 to Chelsea in third.Kevin De Bruyne’s superb curling finish was enough to secure victory over the Blues last time out, and the Belgian could start up front at St. Mary’s with Raheem...
PREMIER LEAGUE・12 HOURS AGO
Tribal Football

Manchester City boss Pep Guardiola is happy seeing Oriol Romeu thrive with Soutnampton. Guardiola coached Romeu at Barcelona and praised the midfielder before Saturday's 1-1 draw. "His understanding," the title-favourite's manager said. “I like it when holding midfielders understand the game. “He knows exactly how his team have to...
PREMIER LEAGUE・6 HOURS AGO
Tribal Football

Barcelona coach Xavi insists he hasn't wrote off Frenkie de Jong. The midfielder started on the bench against Athletic Bilbao in the Copa del Rey. “He has to be an important player, and he will be. He just came back from calf problems," said Xavi. De Jong has not been...
SOCCER・5 HOURS AGO
Daily Mail

Liverpool boss Jurgen Klopp has ordered his team to keep things ‘rock solid’ at the back in order to handle the absence of Mo Salah and Sadio Mane at the Africa Cup of Nations. Worries about how Liverpool would cope without their star forwards have eased with three...
PREMIER LEAGUE・6 HOURS AGO

Aymeric Laporte spared Manchester City's blushes as the Premier League leaders were held to a 1-1 draw at Southampton, while Manchester United moved into fourth place after Marcus Rashford's last-gasp goal sealed a 1-0 win against West Ham on Saturday. Ferguson was unbeaten in three matches as caretaker boss against Chelsea, Manchester United and Arsenal before Carlo Ancelotti took charge just over two years ago.
PREMIER LEAGUE・8 HOURS AGO
The Independent

Manchester City were denied a 13th consecutive Premier League win as Southampton held on to claim a deserved point in a 1-1 draw at St Mary’s.Kyle Walker-Peters stunned the visitors when he finished off a well-worked move by curling home the opener for Ralph Hasenhuttl’s men with just seven minutes on the clock.It took City until the 65th minute to level through Aymeric Laporte, with both Kevin De Bruyne and Gabriel Jesus striking the woodwork as Pep Guardiola’s side searched in vain for a winner.The result leaves the reigning champions 12 points clear of second-placed Liverpool, albeit having played two...
PREMIER LEAGUE・8 HOURS AGO
The Independent

Former Manchester City forward Ferran Torres scored his first goal as a Barcelona player on Thursday night, but could not prevent his side being eliminated from the Copa del Rey.The Catalan outfit are the reigning champions of Spain’s domestic cup competition, but the side they defeated in last season’s final, Athletic Club, had their revenge thanks to a 3-2 victory in extra time.It had initially seemed as though the Basque side would progress in 90 minutes after a wild start and end to the match.Iker Muniain netted just two minutes in, before Ferran’s equaliser midway through the first half -...
SOCCER・1 DAY AGO
Daily Mail

FORMER Chelsea ace Oscar is reportedly continuing discussions with Barcelona over a potential transfer. Brazilian news outlets claim the 30-year-old insists negotiations ‘are not over yet’ with the Catalan club reportedly waiting on player departures. The former Stamford Bridge midfielder currently plies his trade in the Chinese Super...
PREMIER LEAGUE・8 HOURS AGO
Daily Mail

Jack Grealish 'waited in the tunnel' to confront Southampton's Oriol Romeu after the Spaniard fouled the Man City star during their 1-1 draw at St Mary's... prompting the £100m England forward to get up and push his rival

A furious Jack Grealish was waiting in the tunnel to confront Southampton’s Oriol Romeu, according to Saints boss Ralph Hasenhuttl. The £100million Manchester City was embroiled in a heated row with Romeu, who had accused the England ace of play-acting after a tackle from Jan Bednarek. Referee Simon...
PREMIER LEAGUE・8 HOURS AGO
Insider

Ronaldo was dragged off in the 71st minute of Manchester United's 3-1 win over Brentford to be replaced by defender Harry Maguire.
PREMIER LEAGUE・2 DAYS AGO
The Independent

Liverpool are through to the Carabao Cup final after beating Arsenal 2-0 on the night and on aggregate.They will face Chelsea at Wembley, after a dominant showing in the semi-final second leg which saw the Gunners end with 10 men after a late Thomas Partey red card.Diogo Jota raced infield to strike home the game’s first goal from the edge of the box midway through the first half, and the Portuguese forward was the star of the show, lobbing in a second to send the Reds clear.Partey had been on the pitch fewer than 20 minutes when he picked up...
PREMIER LEAGUE・2 DAYS AGO
The Independent

What the papers sayCristiano Ronaldo could be set to leave Manchester United after just one season back at Old Trafford. The Sun reports Ronaldo’s representatives have told the club that failure to qualify for next season’s Champions League would prompt the 36-year-old to look for an exit.The same paper writes that Tottenham defender Japhet Tanganga is a target for AC Milan. Spurs would reportedly be willing to sell the 22-year-old for £21million, but the Serie A title challengers are said to prefer a loan deal.Arsenal have received a loan offer for former captain Pierre-Emerick Aubameyang from Saudi Arabian team Al-Nassr,...
PREMIER LEAGUE・2 DAYS AGO
San Diego Union-Tribune

Liverpool reached the Carabao Cup final for the first time in six years as Diogo Jota’s brace was enough to seal semi-final success at the expense of 10-man Arsenal.After a goalless first leg at Anfield last week, Jota’s first-half daisycutter caught Aaron Ramsdale flat-footed and he then saw a second-half VAR check rule he was onside following a smart finish as Liverpool won 2-0 at the Emirates Stadium.To top off a miserable night for Arsenal, Thomas Partey – who only returned from the Africa Cup of Nations earlier in the day – was sent off just 16 minutes after coming...
PREMIER LEAGUE・2 DAYS AGO