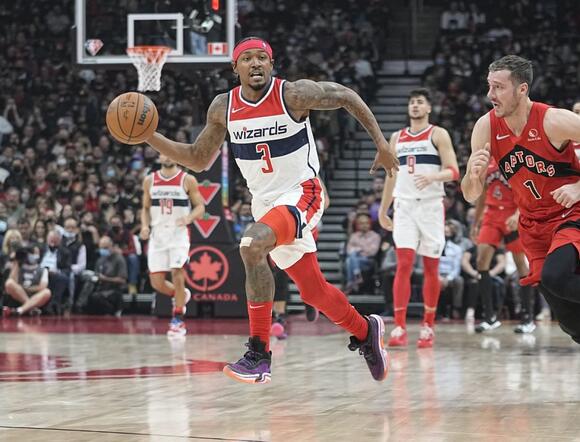 The Washington Wizards will have their All-Star shooting guard Bradley Beal back in the lineup when they visit the Charlotte Hornets on Wednesday.

Bradley Beal has missed the last two games for the Washington Wizards (both wins), and will return to the lineup on Wednesday night in Charlotte against the Hornets.

Beal had been out for personal reasons.

On the season, the Wizards are one of the best teams in the NBA and have come as one of the biggest surprises.

During the off-season they then traded Russell Westbrook as part of a massive five-team trade, and have a totally new roster that has seemed to fit in seamlessly with Beal.

More on the Charlotte Hornets can be seen here.

Bradley Beal and the Washington Wizards dropped a very winnable game against the LA Clippers on Tuesday night, sparking trade rumors and questions about the star guard’s future with the team. With a minute left in the first half, the Wizards took a 66-31 lead over the Clippers. It...
NBA・2 DAYS AGO
Bullets Forever

The NBA announced that Bradley Beal’s foul on Luke Kennard in last night’s Wizards vs. Clippers game shouldn’t have happened

Washington Wizards guard Bradley Beal’s shooting foul on Los Angeles Clippers guard Luke Kennard was a wrong call, according to the NBA’s officiating last two minute report. Kennard made a three point shot while getting fouled with just 1.9 seconds left. He made the free throw after that to give the Clippers a 116-115 win, as they came back from a 35 point deficit in the first half.
NBA・2 DAYS AGO
DallasBasketball

The Dallas Mavericks weren’t the only team to get embarrassed on Tuesday night. The Washington Wizards, after holding a 35-point lead against a Los Angeles Clippers team that doesn’t have Kawhi Leonard or Paul George, ended up blowing the lead and losing 116-115. “I have no words besides...
NBA・2 DAYS AGO
Sportsnaut

Bradley Beal Responds to Trade Possibilities After Losing to Clippers

The Wizards are on the verge of a meltdown after suffering two incredibly brutal losses to the Celtics and Clippers. Morale appears to be at an all-time low, and Bradley Beal was even publicly responding to trade possibilities after blowing a 35 point lead against the Clippers. "I have a...
NBA・2 DAYS AGO
firstsportz.com

Bradley Beal with the Washington Wizards is facing a lot of criticism after their embarrassing loss against the LA Clippers. On Tuesday night, the Clippers overcame a 35-point deficit to astonish the Wizards in the stellar match. Bradley and Co. started the game by showing some stunning plays which brought...
NBA・2 DAYS AGO
ClutchPoints

Bradley Beal and the Washington Wizards were on the wrong end of history on Tuesday after blowing a 35-point lead and allowing the Los Angeles Clippers to win despite leading by seven points with 20 seconds remaining. Apparently, however, a botched call helped LA’s comeback and doomed the Capital city franchise.
NBA・2 DAYS AGO
Hoops Rumors

Bradley Beal on Wizards' humiliating loss to Clippers: We relaxed

The Wizards blew a 35-point lead against the Clippers on Tuesday, suffering a humiliating 116-115 defeat, raising questions about Washington’s direction as a team, according to Josh Robbins of The Athletic. Wizards guard Bradley Beal said it should’ve been an easy win, but that’s not how the game transpired.
NBA・2 DAYS AGO

The Wizards’ struggles continue and part of the issue may be team chemistry problems derived from the club’s surplus of depth. “A lot of my teammates are fighting for minutes. They’re fighting for a spot, they’re fighting for survival in a lot of ways, trying not to be traded, trying to stay in the league, trying to get another contract,” Bradley Beal tells Chris Miller of NBC Sports.
NBA・13 HOURS AGO
Bullets Forever

Beal and the Wizards flop in final All-Star returns

Washington Wizards guard Bradley Beal has finished 11th overall among Eastern Conference guards in combined voting for the 2022 NBA All-Star Game. This is a drastic decline from last season, when he finished No. 1 overall and was a starter. According to the NBA’s results, Beal was 12th in fan...
NBA・1 DAY AGO
fadeawayworld.net

Bradley Beal Says Teammates Playing With Different Goals Are Hurting The Wizards: "A Lot Of My Teammates Are Fighting For Minutes, For Survival. Trying To Stay In The League. It's Tough To Manage That Because Everyone Has A Different Agenda."

The Washington Wizards suffered a humiliating defeat at the hands of the Los Angeles Clippers on Tuesday night, blowing a 35-point lead against the Californians, earning plenty of jokes and criticism from everybody around the NBA community. A team that started dominating the Eastern Conference has become an inconsistent one,...
NBA・13 HOURS AGO
NBC Sports

Beal believes play-in spot would be 'step back' for Wizards

Bradley Beal has some theories on why the Washington Wizards have been a markedly different team since their 10-3 start. Beal sat down with NBC Sports Washington's Chris Miller in the wake of their fourth loss in five games, a historic defeat which saw them blow a 35-point lead to the L.A. Clippers. Beal thinks the looming trade deadline is having an effect on the team's chemistry, as the business side of the game is coming to the forefront for some of his teammates.
NBA・1 DAY AGO

The Washington Wizards blew a 35-point lead to lose 116-115 to the Los Angeles Clippers on Tuesday. “I have no words besides ‘embarrassing,’” Bradley Beal said. The Wizards raised their expectations for the season after a 10-3 start. Since Nov. 16, they have a 13-22 record. The...
NBA・2 DAYS AGO
ClutchPoints

The Washington Wizards set the NBA on fire at the beginning of the season, contending for a top seed in the Eastern Conference nearly a quarter of the way through the season. Now, they’re the ones that have been burned as they have one of the worst records in the league since the start of December.
NBA・1 DAY AGO
NBC Sports

Report: Every Wizard player except Beal available in trade

The Washington Wizards started the season 11-5 and were one of the great stories of the league. But since Dec. 1 they have been a below .500 team, they have lost 5-of-6 games heading into this weekend, which has dropped them to 10th in the East, clinging to a play-in-spot.
NBA・9 HOURS AGO
NBC Sports

Beal says trade deadline is affecting Wizards, but are they unique?

WASHINGTON -- Wizards star shooting guard Bradley Beal garnered some attention on Thursday for his comments to NBC Sports Washington's Chris Miller, as Beal addressed what is ailing the team in the short-term while also sharing his thoughts on how making the play-in tournament would represent a "step back" in the long-term.
NBA・18 HOURS AGO

The wife of NBA legend Steph Curry has called the gossip 'ridiculous'. The wife of Golden State Warriors star Steph Curry, Ayesha, has addressed rumors that the couple is in an open relationship, labeling the speculation 'disrespectful'. Claims circled on gossip blogs in recent weeks and cited an anonymous tip...
CHARLOTTE, NC・17 DAYS AGO
fadeawayworld.net

LeBron James has been one of the best players in NBA history throughout his career. James entered the NBA as just a teenager and has been spectacular for the entire time he has been in the league. James has been a great scorer for his entire career, and he is very close to a historic milestone.
NBA・2 DAYS AGO
San Francisco Chronicle

Moments after the most prolific 3-point shooter in NBA history left a meeting Tuesday night to get a jersey of his to give to the Pac-12’s leading scorer, that freshman barely could contain her mix of gratitude and joy. “Now my life’s complete,” Cal’s Jayda Curry said....
NBA・2 DAYS AGO
MarketWatch

On the anniversary of Kobe Bryant's death, here’s a look how the NBA legend invested the money that he earned on and off the court
NBA・2 DAYS AGO