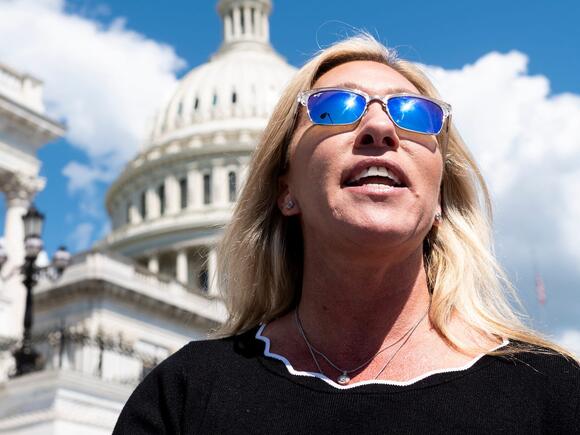 Christie slammed Greene for her endorsement of "reprehensible" and "crazy" conspiracy theories like QAnon, which claims that the world is run by a Satanic cabal of pedophiles intent on bringing down the Trump presidency.

Christie went on to say that it's incumbent on mainstream Republicans to denounce Greene's "baseless, factless, absurd, and dangerous" antics. The former New Jersey governor said he singled out Greene because of her long-running association with or endorsement of violent, racist, and anti-Semitic conspiracy theories .

While Christie insists that the Republican Party must reject lies and those who spread them, he won't rule out supporting former President Donald Trump if he decides to run for reelection in 2024. However, Christie has thoroughly rejected Trump's false claims that the 2020 presidential election was "stolen" by Democrats.

Greene, for her part, has repeatedly compared the Biden administration's COVID-19 vaccine push to aspects of Nazi Germany. In 2017, she shared a link indicating the "Pizzagate" conspiracy theory was valid; she suggested the September 11 terrorist attacks and school shootings in Newtown, Connecticut, and Parkland, Florida, were false flag operations; and she implied that a space laser controlled by a Jewish family was responsible for the 2018 California wildfires.

The Georgia congresswoman has also appeared to endorse political violence against other members of Congress. Mother Jones reported that Greene was the moderator of a Facebook group that had posted several memes advocating for executing Democrats. And CNN reported that Greene had expressed online support for assassinating top Democrats, including former President Barack Obama and former Secretary of State Hillary Clinton.

In January 2019, she liked a Facebook comment saying Nancy Pelosi, who had just become the House speaker after Democrats regained control of the chamber, should get a "bullet to the head," CNN reported. She also reportedly liked other Facebook comments calling for the execution of FBI agents.

The House of Representatives voted in February to strip Greene of her committee assignments in light of media reports detailing her support on social media of violence against lawmakers.

In his memoir, Christie urged members of his party to denounce Greene, writing that "we can't tolerate people" who make "wild accusations."

"Just like we can't align ourselves with violence, corruption, abuse, or racism," he wrote. "That's not who we are."

Christie went on to say that the House's vote to strip Greene of her committee assignments worked in the congresswoman's favor because she was "no longer saddled with doing the committee work she's been elected to do," and she "got busy just being Marjorie Taylor Greene."

Rep Taylor Greene responded by sharing her newest Conspiracy Theory, that President Biden is a being from the 5th Dimension Age of Aquarius!

Trying to figure out his angle here. I mean MTG is indeed batshit crazy, but Christie is not far behind. Wait. He is crazy like a fox.

Marjorie Taylor Greene goes into a bar and the bartender says hey, why the long face? Cue the rimshot. 🐴🤣

Liz Cheney among those to condemn remarks by former House speaker as committee member Zoe Lofgren says: ‘I think Newt has really lost it’
CONGRESS & COURTS・1 DAY AGO
Newsweek

The former president is currently leading the Florida governor by an average of 38 percentage points.
PRESIDENTIAL ELECTION・16 HOURS AGO
Los Angeles Times

Activists warn that the failure to deliver on promises to Black voters could hurt Democrats in the midterm election.
LOS ANGELES, CA・1 DAY AGO

The two sitting Republicans on the 6 January select committee have hit back at former speaker Newt Gingrich for suggesting they could be prosecuted if and when the GOP retakes Congress.Mr Gingrich made his remarks to Fox News’s Maria Bartiromo on Sunday morning, telling the famously pro-Trump host that under a Republican congressional regime, those who have pursued accountability for last year’s Capitol attack should expect rough treatment from the party’s leaders.“All these people who have been so tough and so mean and so nasty,” he said, “are going to be delivered subpoenas for every document, every conversation, every...
CONGRESS & COURTS・1 DAY AGO
Connecticut Post

It’s funny to think about the J.D. Vance of 2016. At the time, hot on the heels of his staggeringly successful memoir Hillbilly Elegy, he was a liberal darling, the media’s chosen intermediary between their ivory towers and the unwashed masses that mysteriously swept Donald Trump into power that November. Vance was a man of both worlds: Yale-educated, Kentucky-raised, and building a powerful mythos around himself as the personification of a united America, while the country around him grew ever more divided.
U.S. POLITICS・6 HOURS AGO
HuffingtonPost

Rep. Marjorie Taylor Greene won’t return to Congress for a second term without confronting some opposition from Republicans in her Georgia district, where several challengers are trying to knock her out in the GOP primary. Greene is still highly favored to win a second term, but her opponents underscore...
GEORGIA STATE・1 DAY AGO
POLITICO

“I get along great with Ron,” Trump said.
POTUS・1 DAY AGO

Sen Bernie Sanders appeared eager to escalate the war between various factions of the Democratic Party on Sunday during an interview with CNN in which he stated his support for the censure and potential primarying of a senator who voted against the party’s effort to change the filibuster and pass voting rights legislation.Mr Sanders appeared on CNN’s State of the Union and said that the Arizona Democratic Party was “exactly right” to censure their state senator after Ms Sinema voted with Republicans last week against the Democrats’ voting rights push.“On that particular vote that she and [Sen Joe] Manchin...
CONGRESS & COURTS・2 DAYS AGO
Fox News

The 81-year-old Pelosi says in an online video that the upcoming election is crucial, and "nothing less is at stake than our democracy.”
CONGRESS & COURTS・4 HOURS AGO
Business Insider

How Marjorie Taylor Greene's endorsement of J.D. Vance shows what it takes to make it into the next generation's MAGA clique

"It's not just about which candidate is more extreme ideologically," pollster Frank Luntz told Insider, explaining that anger is key in primaries.
OHIO STATE・7 HOURS AGO

"He will be helpful in winning back House seats," she said Sunday, but predicted "there starts to be a break" after the midterms.
PRESIDENTIAL ELECTION・2 DAYS AGO
cowboystatedaily.com

***For All Things Wyoming, Sign-Up For Our Daily Newsletter***. The message is something the Liz Cheney office has been reminding voters for nearly a year now: Wyoming’s congresswoman is a conservative and a staunch one at that. But ever since Cheney stood up to Trump after the January 6...
WYOMING STATE・1 DAY AGO
Business Insider

Jones spoke at Trump's "Stop the Steal" rally on January 6 and was seen telling the crowd they needed to get on a "war footing."
CONGRESS & COURTS・12 HOURS AGO
The Free Press - TFP

U.S. Supreme Court Justice Sonia Sotomayor has been in the news a lot lately. First, the liberal justice revealed a staggering amount of ignorance about COVID-19 in early January as the court heard oral arguments over President Joe Biden’s vaccine mandate for large employers. Sotomayor was so off –...
CONGRESS & COURTS・1 DAY AGO

Lt. Gov. Garlin Gilchrist has been in office for over three years, making history as Michigan’s first African-American lieutenant governor. The Democratic father of three, who contracted COVID-19 earlier this month after his daughter tested positive, posted a Twitter video Thursday afternoon in which he was masked up and announced that he was back to […] The post MIGOP Co-Chair Meshawn Maddock calls 1st Black lieutenant governor a ‘scary masked man’ appeared first on Michigan Advance.
MICHIGAN STATE・2 DAYS AGO
Fox News

Rep. Marjorie Taylor Greene Thursday compared vaccine mandates and cards to a Nazi "health pass" in a Telegram post mirroring holocaust-related COVID-19 rhetoric that landed the congresswoman in hot water last year. "This past year the Democrat's obsession with vaccine cards proved they are like the Nazi's who forced people...
CONGRESS & COURTS・5 DAYS AGO
Markets Insider

In September, Greene told Insider that, "I have an independent investment advisor that has full discretionary authority on my accounts."
CONGRESS & COURTS・4 DAYS AGO
CBS 58

MADISON, Wis. (CBS 58) -- The Republican leader of the state Assembly is punishing a member from his own party for making repeat false statements that former President Donald Trump won in Wisconsin and is trying to reclaim Wisconsin's electoral votes. Assembly Speaker Robin Vos removed the only staffer from...
WISCONSIN STATE・5 DAYS AGO